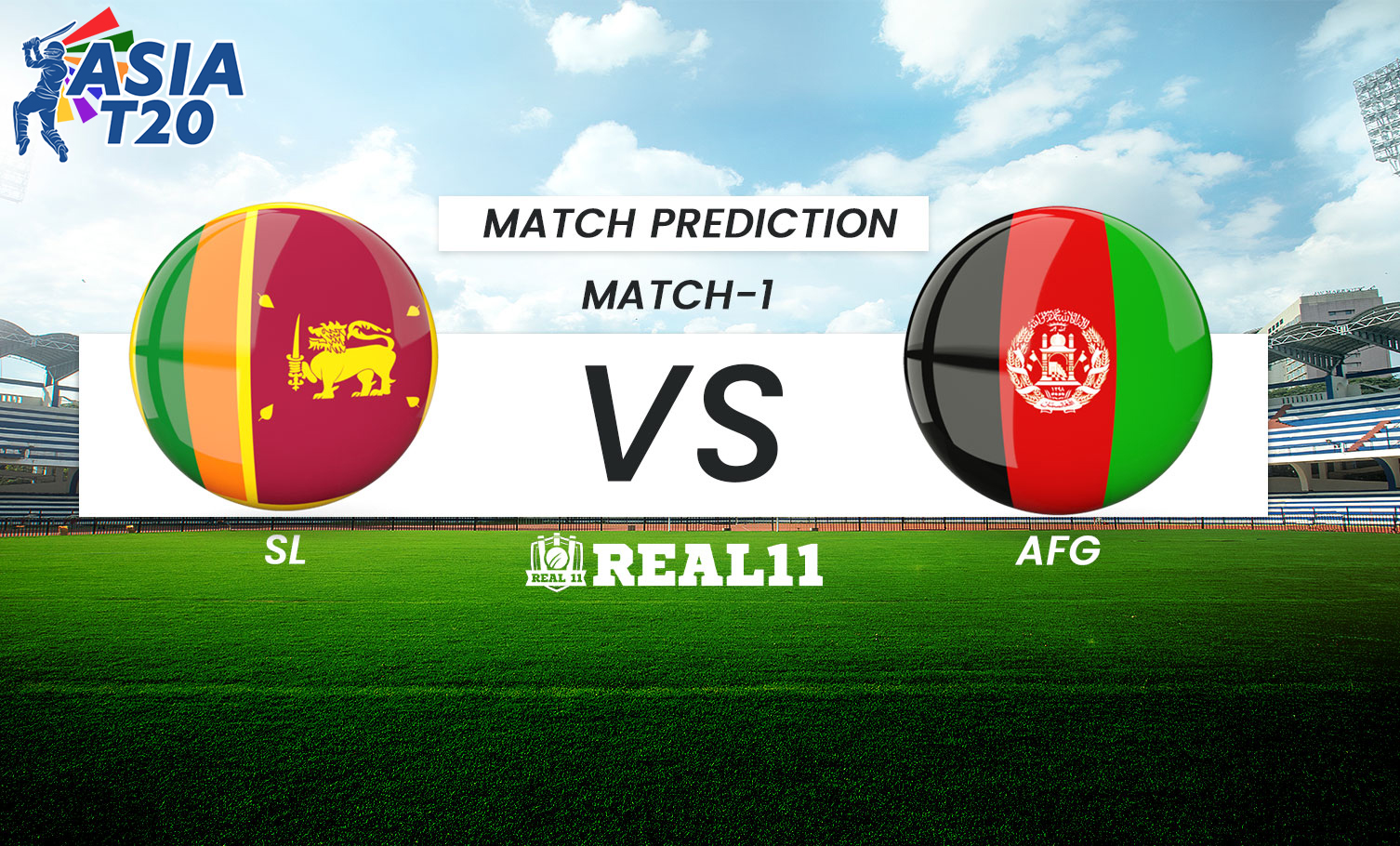 Given that they have just suffered series losses, both teams have work to do (Afghanistan to Ireland and Sri Lanka to Australia). Even though the setting is quite different, they must polish their combinations because this is their final opportunity to train before the important tournament in Australia. However, it is what it is, regardless of how it impacts Sri Lanka, Afghanistan, the Asia T20 organisers, or the viewers. The best everyone can do is buckle up and hope it's all worth it.

For teams to chase. The opposing side batted second in 12 of the 13 games of the 2021 T20 World Series in Dubai, including the decisive match between Australia and New Zealand. With a predicted high of 36 degrees, a scorching evening is expected.

Both teams have faced each other only once in T20Is before. SL won that solitary game by six wickets at the Eden Gardens in 2016.

Sri Lanka has used 11 players as openers in 33 games since January 2020, but the group only averages 19 runs per game and has a 112 strike rate. That won't work against Afghanistan's pacers, who have now surpassed the spinners in wickets taken for the first time since 2016 (Rashid Khan's maiden season playing for the national team in its entirety).

Afghanistan's pacers have taken 32 wickets this year compared to their spinners' 29. Skipper Nabi will expect his seam bowlers to come good against a fragile Sri Lankan side who post the 2021 World T20 Series have a 2-9 Win Loss record in white ball cricket.

In Dubai's hot and dry weather, the playing field has been covered for the majority of the day. Curators have had plenty of time to hydrate the surface and make sure that the moisture content is maintained at a steady level because training is only conducted at the neighbouring International Cricket Board affiliated Academy. There hasn't been much dew over the past four evenings. Teams will be pleased because the toss advantage will decrease as a result. Additionally, it will guarantee a fair competition between ball and bat bat.

Bhanuka Rajapaksa: One of the most devastating batters in this format is Bhanuka Rajapaksa. The talent he possesses is not represented by his T20I statistics. His batting strike rate, which is 134.61, does a lot to describe him. In this tournament, Rajapaksa is one of the players to keep an eye on.

Wanindu Hasaranga: It took Wanindu Hasaranga 32 games to accumulate 50 wickets in T20Is. He achieved a 50-wicket haul in international cricket in 2 years and 61 days, making him the fastest player to do it in terms of time. In the game's shortest format, Hasaranga has become a force to be reckoned with. He has amassed 46 wickets at an average of 12.67 in 25 games since 2021. Only Tabraiz Shamsi, who has 48 wickets in 31 games, is a bowler who has more wickets than he does.

Mohammad Nabi: In Afghan cricket, he is already regarded as a legend. The team's captain has participated in 96 T20 Internationals and could play in his 100th match in this tournament. Nabi has 80 wickets to his name and a T20I batting average of 22.64 with 1653 runs.

Rashid Khan: After going without a wicket in the first three Twenty20 Internationals against Ireland this month, Rashid Khan recovered to take three wickets in the final two games of the five-match series. He took 3 wickets for just 25 runs in his final appearance in The Hundred.

Maheesh Theekshana: Out of the 16 wickets he has taken at an average of 27.37 throughout the course of 18 T20Is, 7 of those wickets have come this year. Hasaranga and Theekshana might be the ideal team, and they can wreak havoc in this competition.

Rahmanullah Gurbaz: Of all the players, he is without a doubt the greatest choice for the wicket keeper position in this game. He has scored 676 runs in 27 T20Is, averaging 25.03 and hitting 133.86 percent of his targets, including four half-centuries.

Naveen-ul-Haq: In 112 T20 games, the 22-year-old fast bowler has 140 wickets at an average of 21.94. However, in 18 games, he has only claimed 25 wickets for Afghanistan. If he wants to improve his stats, he should take part in this competition.

It seems very 2022 to say this, but Sri Lanka and Afghanistan might be rather well matched teams. Afghanistan plays weaker nations than the other team more often than not, although since 2020, they have also won a T20I series against Ireland, two against Zimbabwe, and one against Bangladesh. The Asia T20 opening is a game to anticipate because there isn't much to choose between the teams. Sri Lanka is just slightly favoured in a match of equals due to their batting potential. 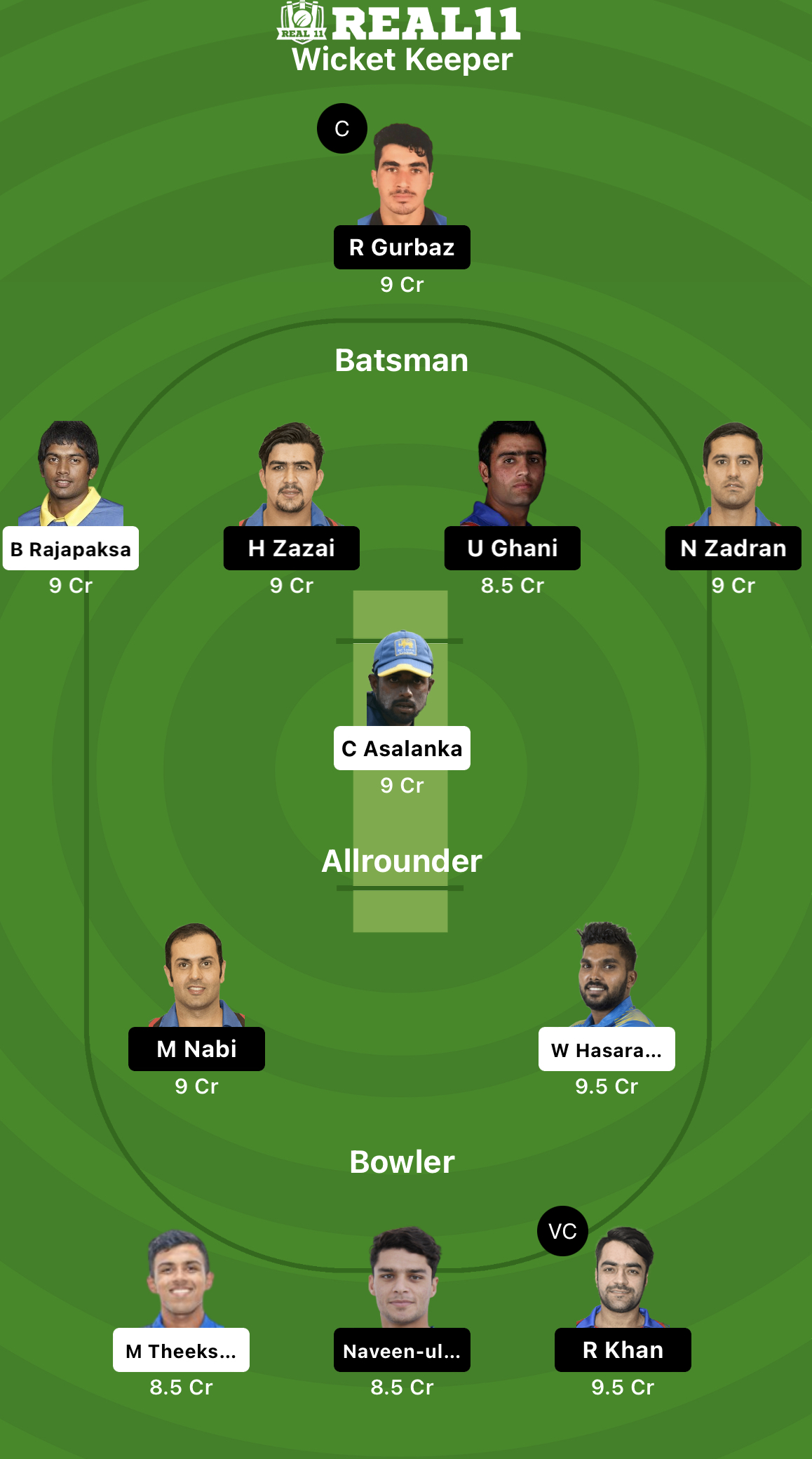