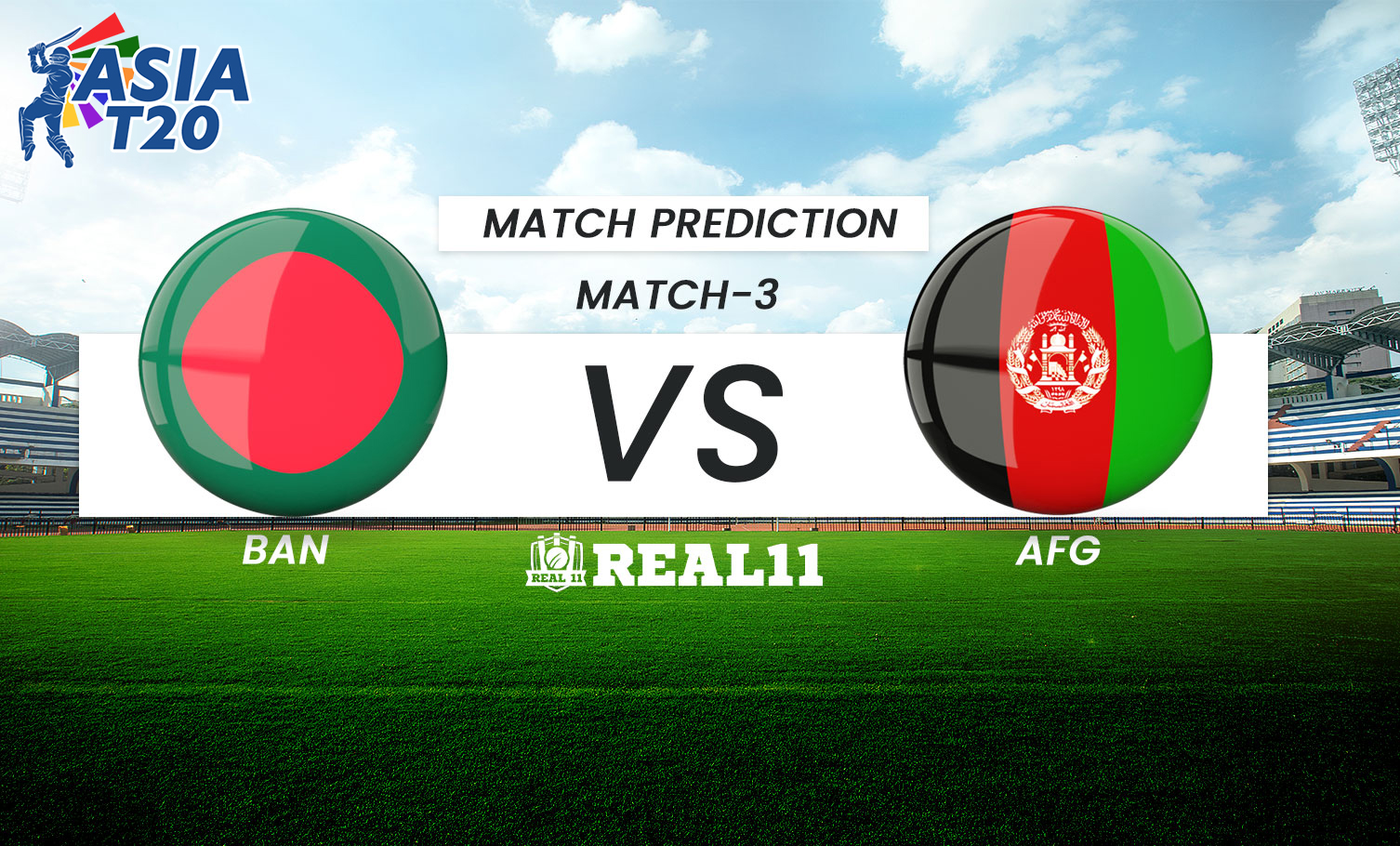 Bangladesh are set to face Afghanistan in match number 3 of the ongoing edition of the Asia Cup T20 at the Sharjah Cricket Stadium on Tuesday. After securing a comfortable victory in their opening game, Mohammad Nabi led team would be keen to continue their winning run in this tournament. The Bangla Tigers on the other hand would be desperate to start their campaign on a winning note.

Shakib Ali led side has been in terrible form off late. The big players in particular have failed to deliver the goods. Mahamudullah Riyad, Shakib Ali and Musfiquir Rahim have struggled with their form which is not a positive sign for Bangladesh. These three will have to fire in unison and take the batting onus for their team. Other than them, Bangladesh don’t have many options in the batting department. Mehidy Hasan and Mustafizur Rahman will hold the key for them in the bowling prowess.

Afghanistan started their Asia T20 in supreme fashion to get their campaign up and running.  They battered Sri Lanka in their opening tie to top the group B standings. Afghani bowlers played a pivotal role in their team’s emphatic victory in the last game. Pace sensation Fazal Haq Farooqi was the pick of the Afghanistan bowlers. He ended the game with impressive match figures of 3/11. Farooqi enjoyed good support from Mujeeb Ur Rahman and Mohammad Nabi at the other end who took 2 scalps apiece to trigger a batting collapse in Sri Lanka’s innings. Afghanistan in reply comfortably chased down the target of 106 inside 10 overs.

The Dubai pitch off late has favoured the teams batting second. Dew is likely to play a crucial role in this game. The team winning the toss should elect to bowl first.

Hazratullah Zazai: The Afghani opener scored an unbeaten 38 in the last game. He looked very comfortable during his whirlwind knock. His aggressive style of play and unparalleled ability to attack right from the onset makes him a hot pick

Sabbir Rahman: He possesses the exceptional gift of timing. Rahman has been away from cricket for quite some time now. He is set to make a return after a gap of three years and will thus be keen to make an instant impact.

Shakib Al Hasan:  He is one of the finest all rounders in the world of cricket. Shakib has been an essential part of Bangladesh's lineup. Over the years, he has consistently delivered for his nation with both bat and ball.

Mohammad Nabi: He has emerged as a genuinely potent all rounder. Known for his power hitting down the order, Nabi also has a knack of picking wickets at regular intervals. In the last game against Sri Lanka, the Afghani skipper took two major scalps with the ball.

Fazal Haq Farooqi: We witnessed a masterclass in swing bowling by the left arm seamer in Afghanistan’s opening game. The 21 year old ripped through Sri Lanka’s batting in the last game. We back the Afghani speedster to do more of the same in this crucial tie against a fragile and relatively inexperienced Bangladesh unit.

Mustafizur Rahman: Over the years, Rahman has earned the reputation as a T20 specialist. Off late he has struggled with his line and length a bit but that doesn't change the fact that he is one of the best out there.

Rahmanullah Gurbaz: In his 28 match career, Gurbaz has come out as a force to reckon with. The wicket keeper batter scored a blistering 40 in the tournament opener to help his side chase down the total in quick time

Mahmudullah is our pick for this segment. The veteran is going through a lean patch at the moment and having him as the captain of your fantasy team can be risky. 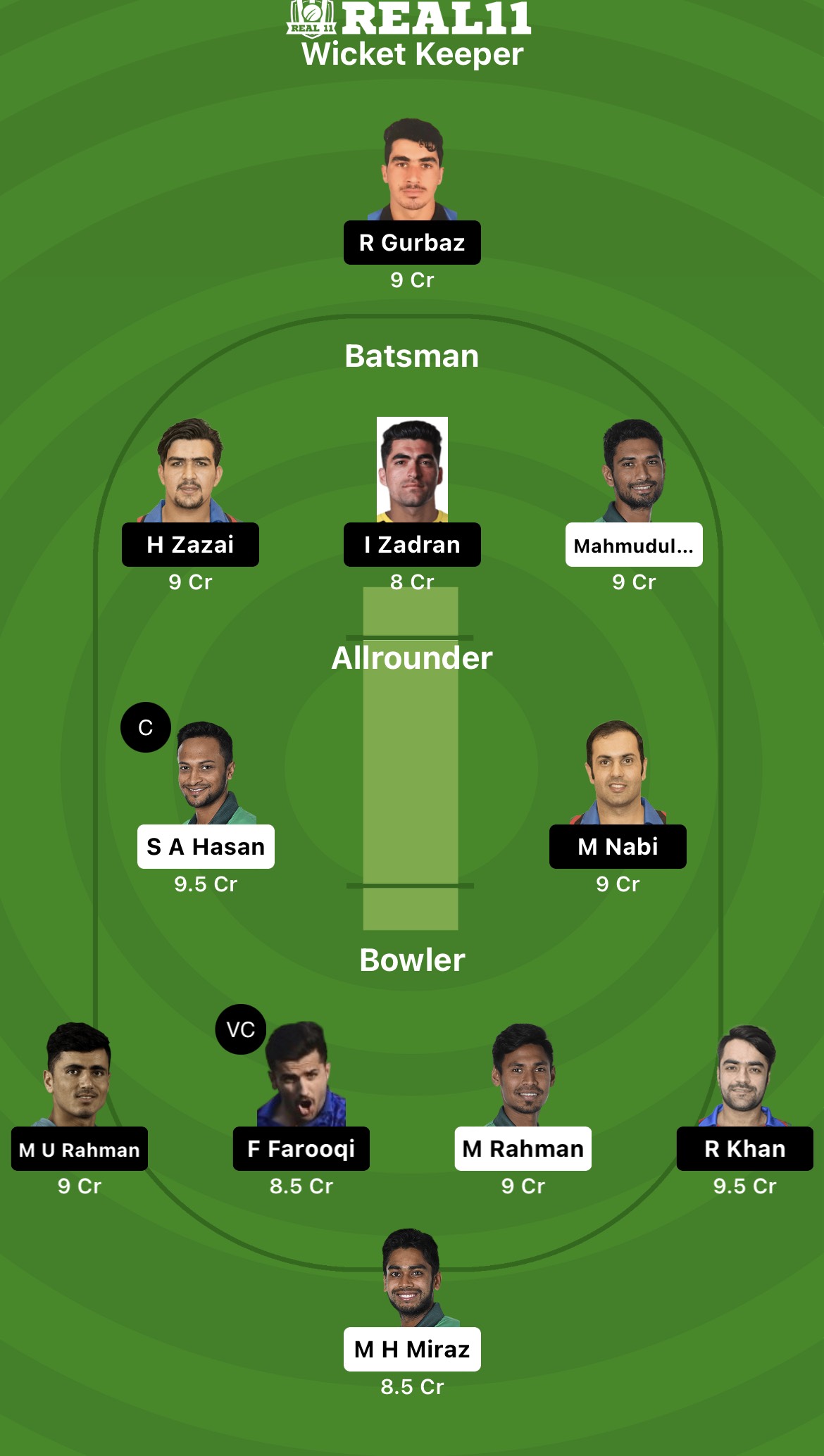