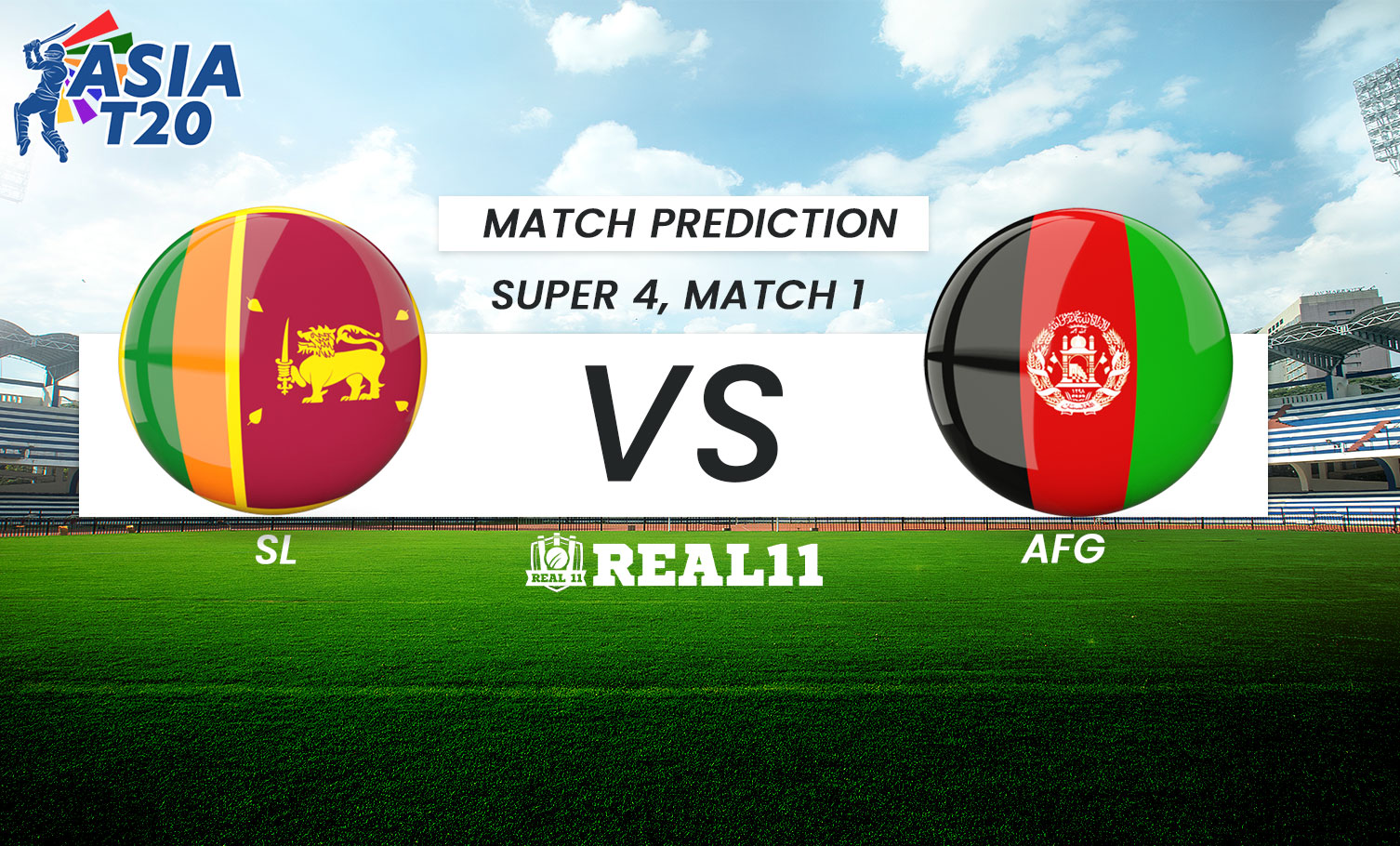 After a week of exhilarating league stage action, we will move to the first match of the Super 4 stage. Afghanistan and Sri Lanka will lock horns in game one of the Super 4 on Saturday at the Sharjah Cricket Stadium, Sharjah. With 2 wins in as many games, Afghanistan became the first team from Group B to advance through the super 4. They defeated Bangladesh and Sri Lanka during the league stage. Sri Lanka on the other hand faced a 8 wicket loss in their opening game against Afghanistan. They then edged past Bangladesh in a last over thriller to stay in the competition.

Afghanistan is a team to beat this season. They have been instrumental with both and ball in hand. The spin trio of Mohommad Nabi, Mujeeb Ur Rahman and Rashid Khan have been the chief architects of the consecutive victories. Pacers have also chipped in with crucial wickets and kept the opposition batters in check. In the batting department, Afghanistan have the likes of Hazaratullah Zazai, Rahmanullah Gurbaz and Najibullah Zadran. The opening pair of Zazai and Gurbaz starred in Afghanistan’s maiden win in the tournament. The duo stitched together a fiery 83 run partnership chasing a model total of 106. Najibullah Zadran stole the show in the second game in which he smashed six sixes during his 17 ball knock. With one up in the head to head battle this year, Afghanistan will be confident coming into this game.

Sri Lanka held their nerves in a do or die encounter against Bangladesh. Chasing 184 for victory, Lankans got off to a flyings start. Pathum Nissanka and Kusal Mendis added 45 runs for the first wicket before Nissanka was removed by debutant Ebadot Hossain. He then took  the prized wicket of Charith Asalanka to bring Bangladesh back in the game. Sri Lanka lost three wickets in quick succession before skipper Dasun Shanaka joined Mendis at the crease. The two scored runs at a brisk rate and kept the asking rate within reach. Cameos from Asika Fernando and Chamika Karunaratne down the order helped the men in blue and yellow. Ahead of the tantalising encounter, let us have a look at how these two units will fare out in Saturday’s clash.

The weather is expected to be oppressively hot during the tournament, and Friday in Sharjah won't be any different. The tight margins may also entice the batters, but lately the slower bowlers have tended to do well here.

Charith Asalanka Aslanka missed out in the last match and will be desperate to get some runs under his belt. He is compact, possesses a watertight technique and has the unparalleled ability to pace his innings as per the situation of the match.

Hazratullah Zazai: Zazai is known for his six hitting ability. The dashing opener showed us a glimpse of his range and potential when these two sides met each other in the tournament opener

Mohammad Nabi: The Afghani skipper has played a critical role in his side’s unbeaten run in the tournament thus far. We fancy the veteran to continue his dream run.

Dasun Shanaka: Shanaka played an absolute blinder of a knock in the last game. He can play a critical role in the batting prowess for the Lankans.

Rashid Khan: The spin wizard took 3 wickets against Bangladesh in the last game and surpassed Tim Southee to become the second highest wicket taker in T20Is. He has a lot of tricks up his sleeve and Sri Lanka batters need to be wary of the Rashid threat.

Maheesha Theekshana:  The 22 year old has been a revelation for the Lankans in the bowling attack. He picked the prized wicket of Shakib Al Hasan in the last fixture.

Rahmanullah Gurbaz:  He alongside Zazai will have the onus to give Afghanistan a decent start. Aggressive by nature, Gurbaz can also play an anchor role if the situation demands.

FazalHaq Farooqi started the tournament on a commanding note but ever since has been unable to recreate the first match magic. After taking 3 wickets in the opening game, Farooqui remained wicketless in the following match.

We predict Afghanistan to win this encounter. They have done it once and we believe they can do it again. 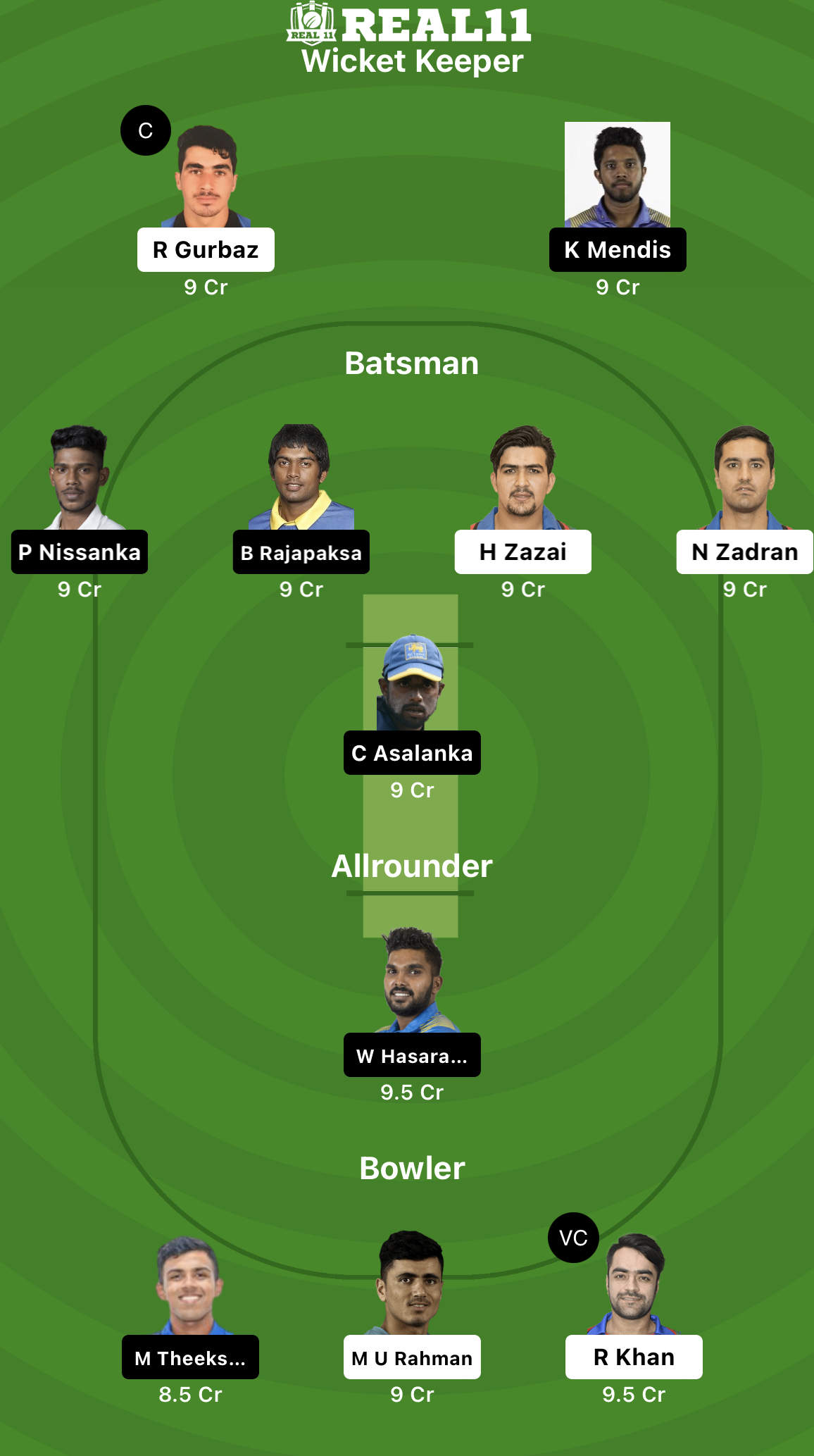