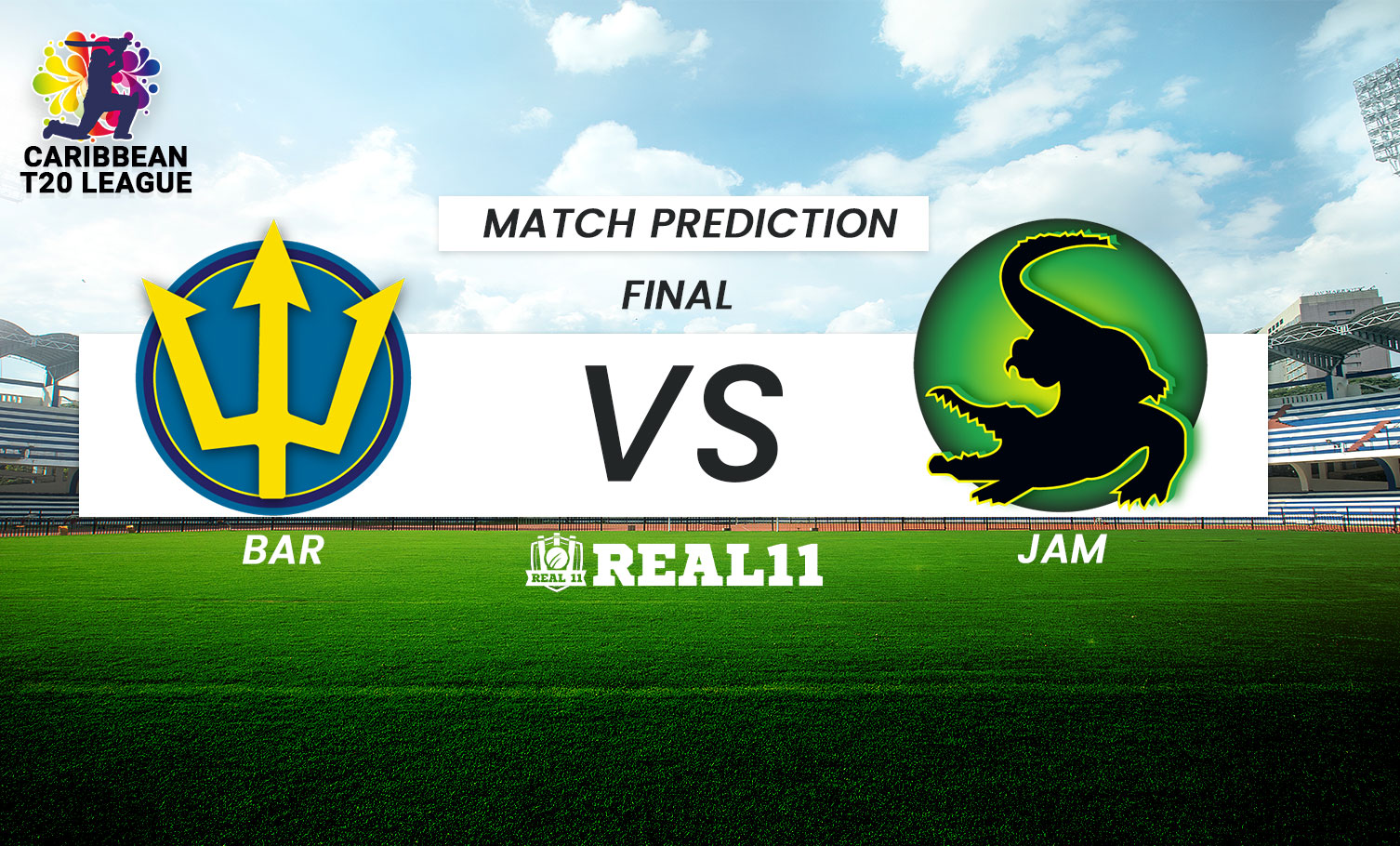 BAR will take the field against JAM in the grand finale of the Caribbean T20 League 2022. Both teams have been very good throughout the competition. BAR were the first to book a place in the finals while JAM had to play two games against Kings and Warriors respectively to earn a spot in the final. The two teams will meet each other one last time in this competition at the Providence Stadium, Guyana on October 1, Saturday.

Jason Holder led JAM will be heading into this encounter with a world of confidence. They are coming into this one on the back of two consecutive victories. Shamarah Brooks and Imad Wasim powered their side to the final. While Brooks smashed a scintillating century, Wasim scored 41 off 15 balls down the order to propel JAM to 226 in Qualifier 2.Warriors in reply could only muster 186 runs on the board. One of the biggest strengths of JAM this season has been their bowling. Mohammad Amir and Imad Wasim have hunted in tandem and picked a combined 32 wickets in just 11 matches. Brandon King, Rovman Powell and Shamarah Brooks will be the batters to keep an eye on.

BAR hasn’t put a foot wrong in the competition thus far. They have excelled in all three departments and are fittingly in the final. Rakheem Cornwell and Azam Khan have been their key players with bat in hand. Cornwell decimated GUY’s bowling prowess and scored 91 off just 55 balls to put his team in driver’s control. Wicket keeper batter Azam Khan smashed a quickfire 55 down the order to propel BAR to 195. Royal bowlers then bundled out the opposition for 108 to seal a spot in the finals. Obed McCoy and Mujeeb Ur Rahman will be the key bowlers to watch out for. Ahead of this rollicking final, let us have a look at how these two teams will fare out in the clash.

The pitch at Guyana is favourable for batters. Even bowlers get some assistance from the wicket. We have seen big totals getting chased down at this ground throughout the Caribbean T20 League. So, expect another high scoring encounter.

Rakheem Cornwall: Cornwall smashed 91 from 54 balls in the first qualifier against the   Warriors. He will be expected to perform a similar role in the final as well.

Kyle Myres: Mayers is in his prime form at the moment. With 337 runs in 11 innings, the opening batter is the third highest run scorer in the tournament.

Imad Wasim: Wasim was excellent with the bat in the last game as he smashed 41 from 15 balls which helped the Tallawahs post a formidable total on the board. He is also the second highest wicket taker in this competition.

Jason Holder: The BAR skipper has had a stellar season so far. He has already taken 16 wickets with the ball in hand. Holder is also a pretty handy batter down the order.

Mujeeb Ur Rahman: He is a crafty customer with the ball. The spin bowler has picked 10 wickets in just 6 matches.

Mohammad Amir: The ace speedster has picked 16 wickets in just 11 matches and is amongst the leading wicket takers in this competition.

Kennar Lewis: Lewis was unable to score runs against GUY in the second qualifier. He will have to put up a better show in the finals.

Harry Tector is our pick for this segment. He has failed to create any considerable impact on the tournament thus far. You can play a huge gamble by assigning him as the captain of your fantasy team.

Looking at the team combinations, the game could go either way because the teams are very strong. 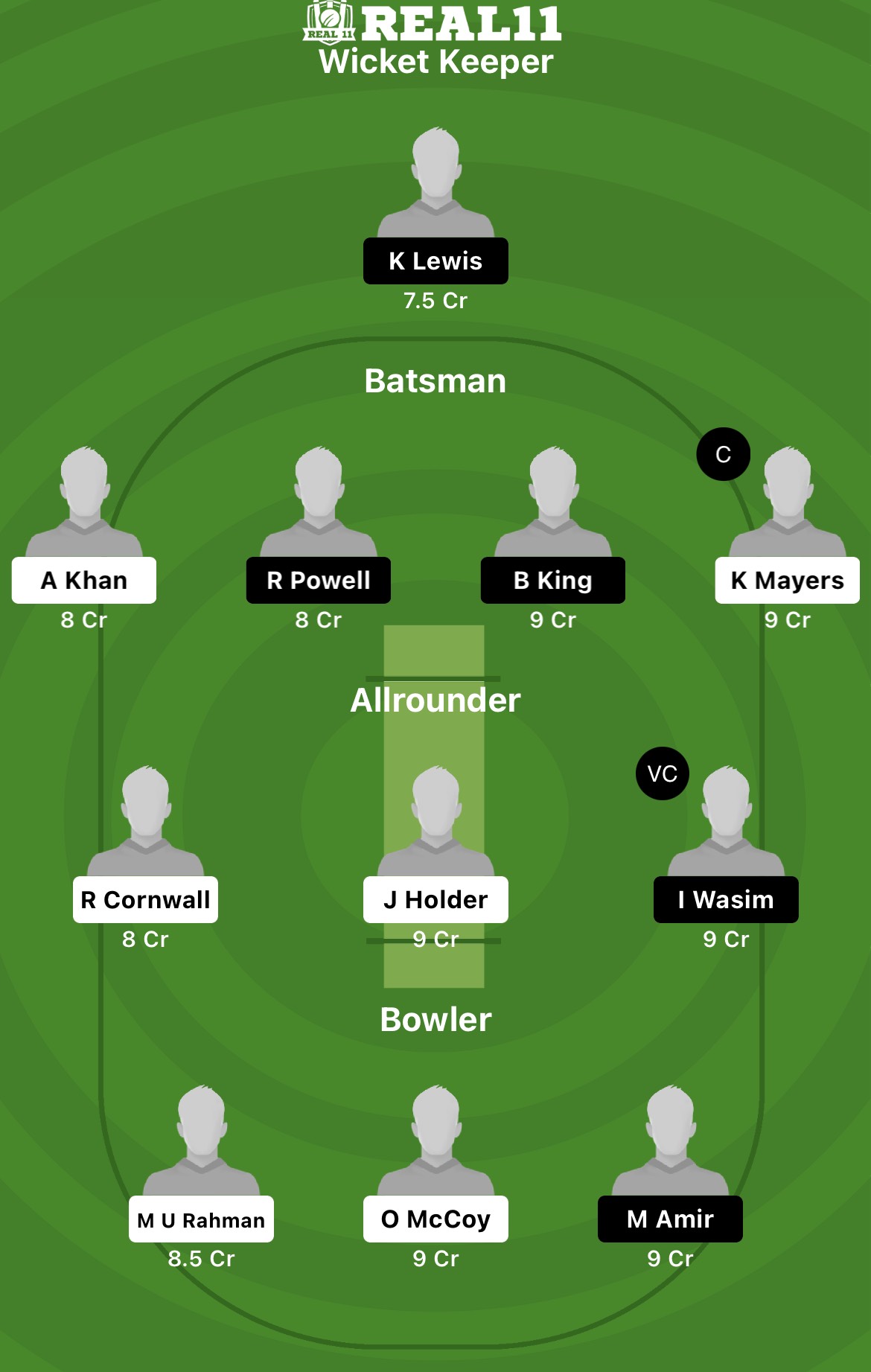