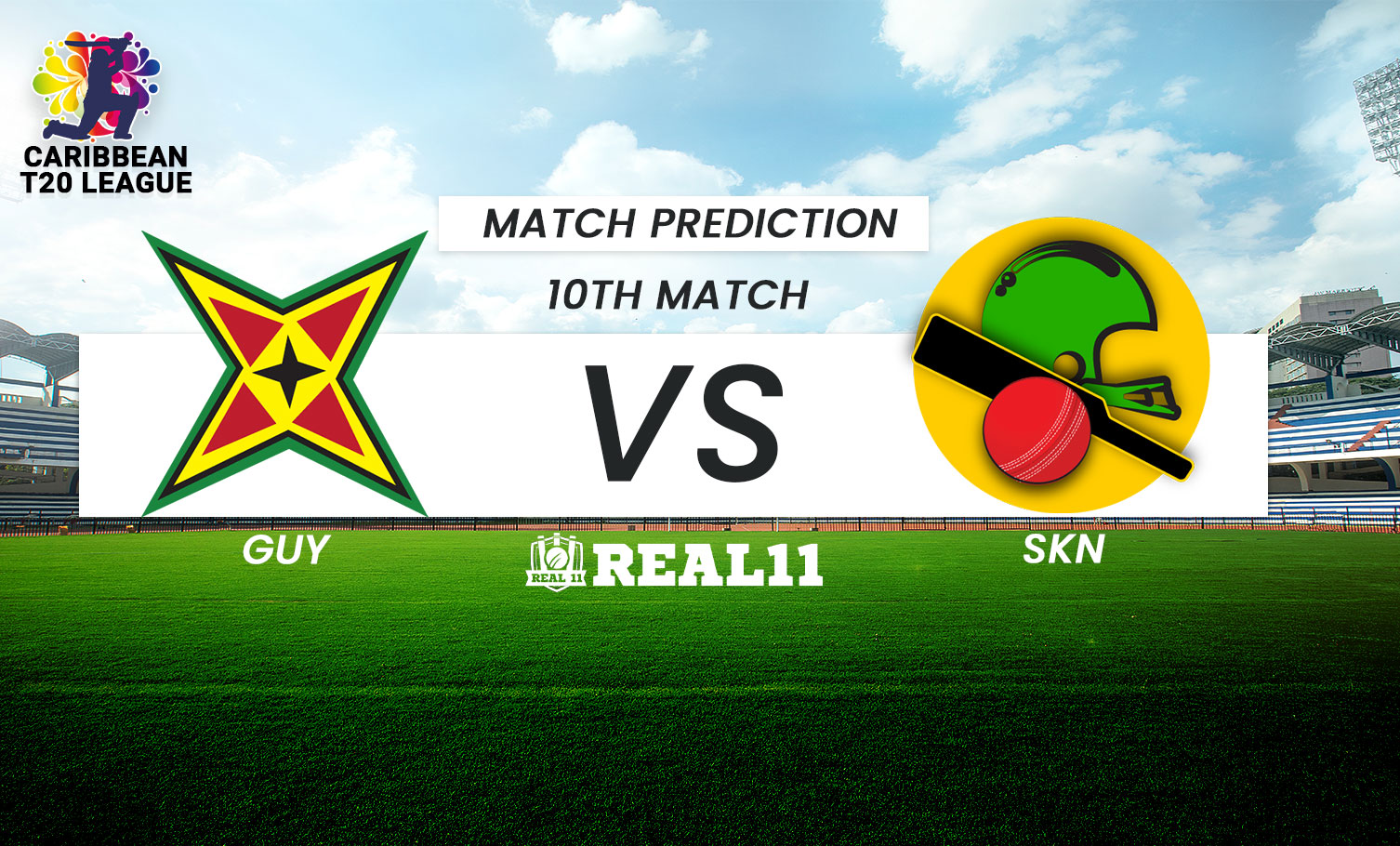 GUY will be facing SKN in match number 10 of the Caribbean T20 league 2022 at the Darren Sammy National Cricket Stadium in Gres Islot on Thursday. GUY’s last two games, including their most recent match with the SKN, had to be postponed due to rain. They have gone four games without a win after losing their opening two games.

BR defeated the SKN by seven wickets in their first meeting, and the Patriots' most recent match with the Royals was called off due to severe weather. They have defeated GUY in three of their previous five meetings, making them the favourites to win this clash.

The pitch at Daren Sammy National Cricket Stadium, Gros Islet, St Lucia is well balanced for both the batting and the bowling departments in white ball cricket. The Pacers will supposedly get more bounce with the new ball. The skipper winning the toss shall opt for bowling to use the pace and bounce off the surface. A score of 160 is expected to be scored in the first innings of the match.

Shimron Hetmeyer: In the first game against the Jamaica Tallawahs, the Guyana captain scored the most runs—39 off 45 balls—and then scored 32 off 18 balls in the final 6IXTY match.

Evin Lewis: In the recently finished 6IXTY competition, the explosive opener contributed significant cameo hits, scoring 32 runs off only 16 balls against the Knight Riders in the championship match. Despite only scoring four runs in the Caribbean T20 League 2022 opener, he is still among the Patriots' top batters.

Dwaine Preterious: With just five runs in two games so far in the Caribbean T20 League 2022 season, the star South African all-rounder is yet to make a significant impact. He will be a valuable pick for this game after his last game’s performance where he took a wicket and conceded only 18 runs.

Dwayne Bravo: In his first two games, the veteran all-rounder has taken three wickets and scored 20 runs. In this game, the Patriots will rely heavily on him as a bowler because he has taken wickets in each of his past five games.

Gudakesh Motie: The West Indies spinner maintained his blistering form after taking two wickets and only giving up 10 runs in the most recent game against Jamaica. In the previous five matches, he has taken 10 wickets.

Imran Tahir: The 43-year-old spinner, who has just 8.5 credits on Real11, claimed a wicket while only giving up 22 runs in the first game against JAM.

Andre Fletcher: The seasoned wicketkeeper-batter is SKN’s leading run scorer this season with 112 runs in two innings. He scored 31 runs in the first game against JAM , then 81 runs off 55 balls in the decisive match against BR.

Evin Lewis is a dangerous batter up the order. He can prove to be a risky captaincy choice.

We believe SKN will win this encounter. They are a competitive T20 unit with great balance within their squad. 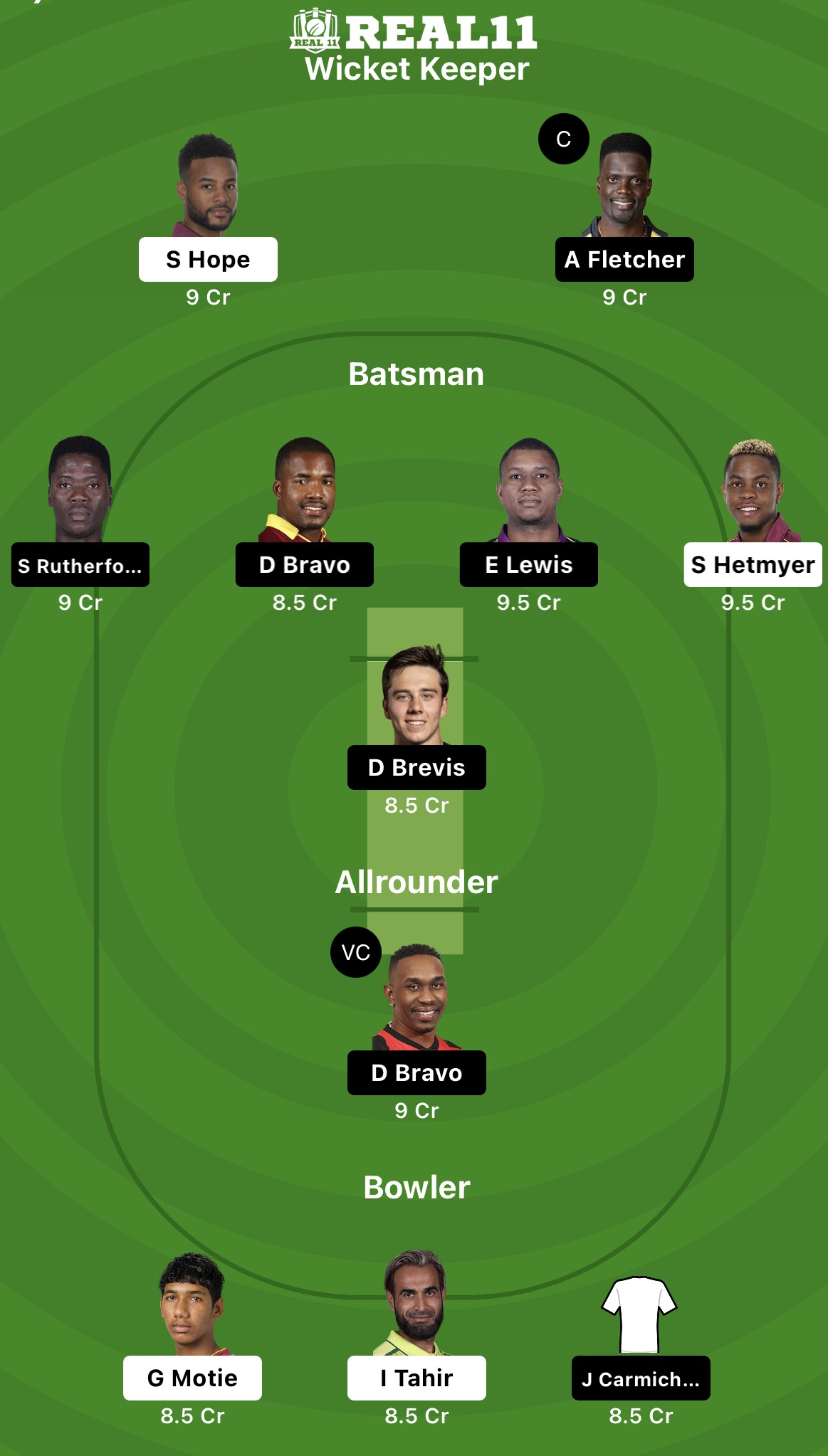