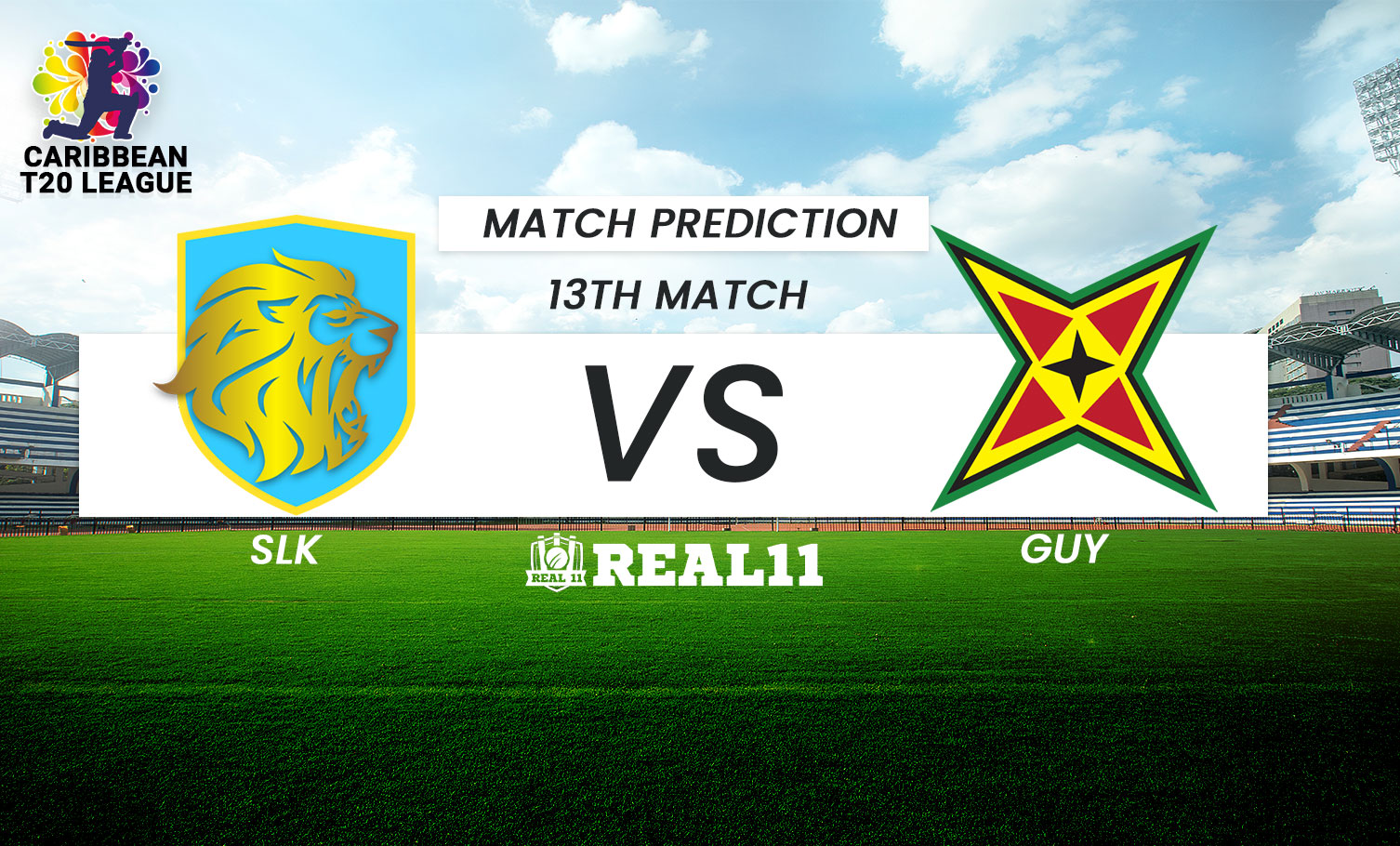 The 13th match of the Caribbean T20 League will be held between SLK and GUY in the Daren Sammy National Cricket Stadium, Gros Islet, St Lucia on Sunday, 11th September.

SLK is just one spot over GUY in the fifth spot of the points table with just 1 win in the last four matches. They lost their last match against BR by 6 wickets. SLK while batting first posted a total of 169 runs. Johnson Charles scored 29 runs in 25 balls to open the innings. The end of the innings was catered by Tim David and David Wiese who scored 40 and 28 runs respectively to take their team to a defendable score. In the second half, Alzarri Joseph again demonstrated his tremendous form by picking three wickets along with Roshton Chase getting his hand in one wicket. But all went in vain as BR won the match with the likes of Kyle Mayers and Corbin Bisch who scored 33 and 81 runs respectively to steal the victory.

On the other side, GUY is at the very bottom of the league table with zero wins in three games. They lost their last game against SKN by 4 wickets. A team that has reached the Caribbean T20 League final 5 times but has never won a title needs a very strong force to get back their confidence in this league. GUY in their last match posted a good target of 162 in their last match. Chandrapaul Hemraj and captain Shimron Hetmeyer scored 43 and 46 runs respectively in the first innings. But their bowlers failed to defend the target as SNK’s opener Andre Fletcher scored 41 runs providing the perfect start for the run chase. Almost everyone from the team contributed to chasing the total and ultimately succeeded in winning the match in 19.4 overs.

The crease at Daren Sammy National Cricket Stadium, Gros Islet, St Lucia is an equally balanced one which assists both the batters and the bowlers. The average score in this stadium is 165 runs. The skipper winning the toss will choose to bowl first and try to restrict as many runs as possible.

Shimron Hetmyer (GUY)- When in form he is enough to cause trouble to the opposing team. We have seen a glimpse of it in the last match where he scored 46 in just 21 balls.

Romario Shepherd (GUY)- He has hard-hitting abilities and also can bowl in tough situations. He scalped two crucial wickets in the last match against SKN.

Alzarri Joseph (SLK)- He has become a wicket-taking machine for his team and has 10 wickets under his belt in just four matches. He also has a great economy of 6.

Scott Kuggeleijn (SLK)- Sometimes he lacks control, but he has the pace to hurry up the batsmen. He has taken six wickets in four matches so far at an economy rate of 9.

Johnson Charles (SLK)- Scored 29 runs in the last match and is quick behind the stumps.

Shai Hope (GUY)- He is consistently scoring runs but at a slower rate. He has played four matches and is expected to soon find his rhythm.

GUY is overall a good side, they will just need a spark to again come back in their old playing style. We think GUY will outplay SLK in this match.