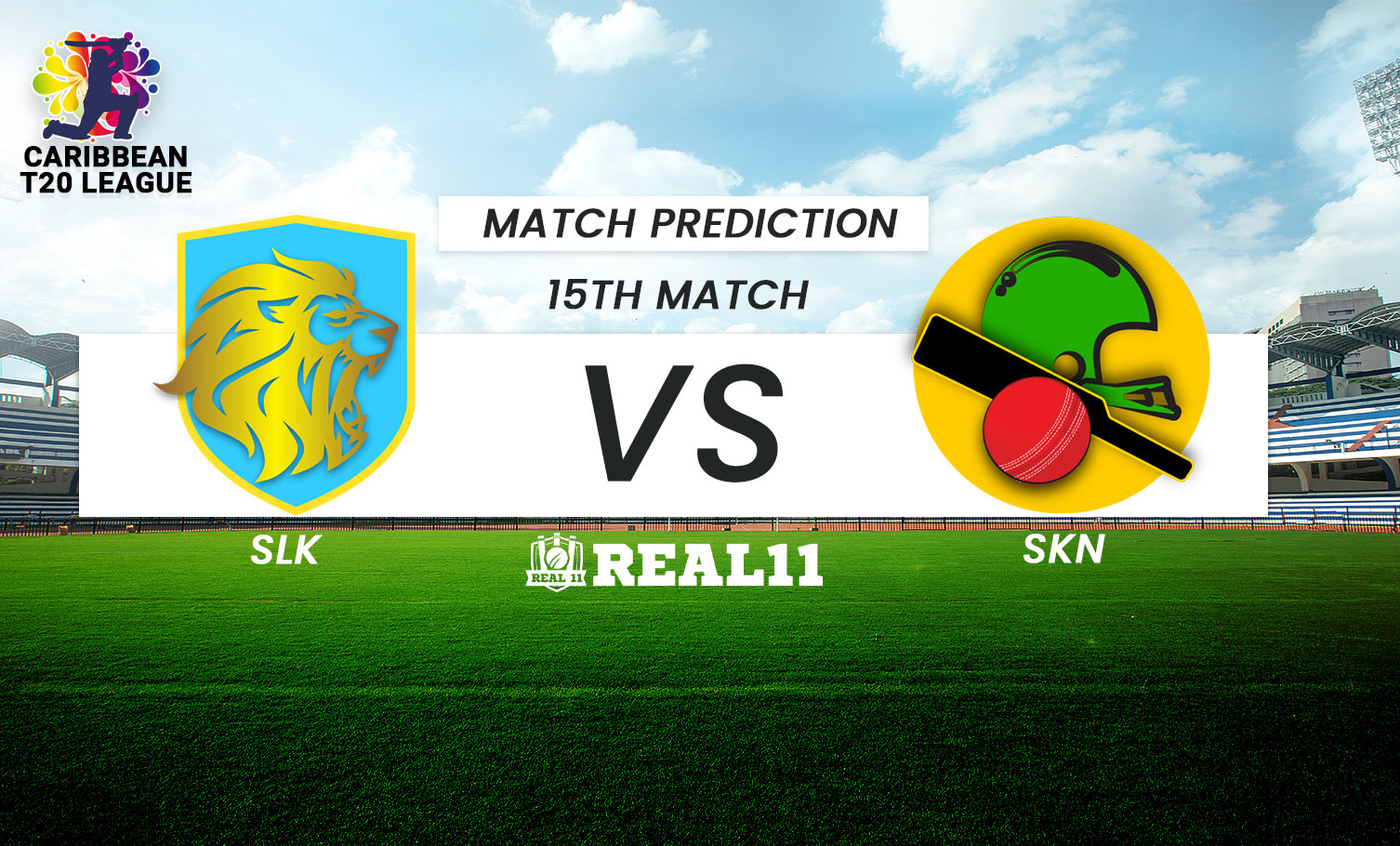 SLK will play SKN in the 15th match of the Caribbean T20 League on Monday, September 12, 2022. The match is scheduled at the Daren Sammy National Cricket Stadium, Gros Islet, St Lucia. Till now SKN has played 5 matches out of which they won one, lost two and another two had no outcomes due to rain. On the other side, SLK has played 4 matches and they won only one, losing the other three. SKN is occupying the third spot in the league table whereas SLK sits in the fifth place.

The St. Lucia-based team lost their last match against BR by 6 wickets. SLK while batting first drafted a total of 169 runs. Johnson Charles scored 29 runs in 25 balls as an opener. Tim David and David Wiese catered the end of the innings by scoring 40 and 28 runs respectively to take their team to a defendable total. In the second half, Alzarri Joseph again demonstrated his sublime form by picking three wickets along with Roshton Chase getting one wicket under his belt. But all went in vain as BR won the match with the likes of Kyle Mayers and Corbin Bisch who smashed 33 and 81 runs respectively to steal the victory.

On the contrary, SKN won their last match against GUY by 4 wickets. With the likes of Chandrapaul Hemraj and  Shimron Hetmyer, the Guyana-based franchise posted 162 runs while batting first. Duan Jansen and Dhananjaya scalped a couple of wickets each from the other side. While chasing the target, opener Andre Fletcher scored 41 runs off 38 balls to power the innings which later turned into a victory due to the collective effort of the team.

The pitch at the Daren Sammy National Cricket Stadium, Gros Islet, St Lucia is a well-balanced one which supports both the batting and the bowling department. The average score in this stadium is 160 runs. The captain winning the toss will choose to bowl first to take advantage of the pitch.

Evin Lewis: In the recently finished 6IXTY tournament, the explosive opener contributed significant cameo hits, scoring 32 runs off just 16 balls against the Tribago-based franchise in the league match. Despite only scoring four runs in the Caribbean T20 League 2022 opener, he is still among the Patriots' top batters.

Dwayne Bravo: In his first two games, the veteran all-rounder has scalped three wickets and scored 20 runs. In this game, the Patriots will rely heavily on his tactics as he has taken wickets in each of his last five matches.

Tim David (SLK)- The 23-year-old Australian all-rounder smashed 43 runs in just 20 balls. Hopefully, there is a lot more to see from his side in this tournament.

Alzarri Joseph (SLK)- He is the leading wicket-taker from his team and has scalped 10 wickets in just four innings. He also has a great economy of 6.

Scott Kuggeleijn (SLK)- Sometimes he lacks control on his skills but he has the ability to hurry up the batsmen. He has scalped six wickets in four matches so far at an economy rate of 9.

Andre Fletcher: The seasoned wicketkeeper-batsman is SKN’s leading run scorer this season with 112 runs in two innings. He scored 31 runs in the first match against JAM, then 81 runs off just 55 balls in a decisive match against the Barbados-based franchise.

Evin Lewis plays on a high note when promoted up the order. He can prove to be a risky captaincy choice.

Tough to choose between the two teams. But SLK proves to be a much better side when we compare their player stats. Hence we back SLK to win this match against SKN.