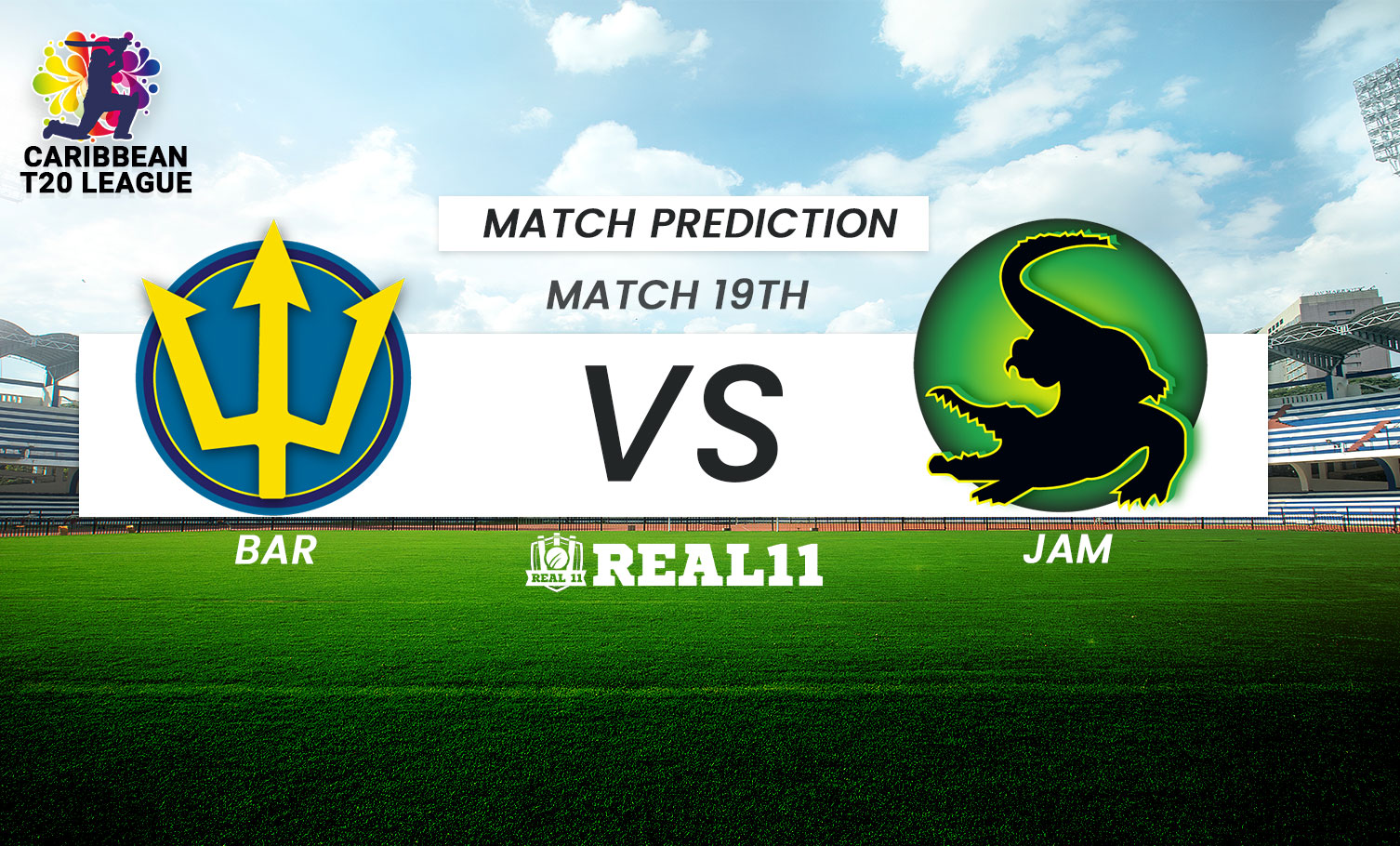 BAR and JAM will cross swords in the 19th match of the Caribbean T20 League, 2022. The match is scheduled at the Queen's Park Oval, Port of Spain, Trinidad.

The last time they met in the 14th match of this season, BAR came out victorious by 8 wickets. The Jamaica-based team while batting first posted a total of 156 runs. The opening pair failed to provide their team with a decent start. However, Amir Jangoo and Rovman Powell stood tall against a menacing bowling prowess. The duo added 34 runs in less than three overs to shift the momentum.  Just when the partnership was looking to run away with the game, Jason Holder struck with the prized wicket of Amir Jangoo. His departure brought Reifer to the crease who went berserk right from the onset. The attacking batter smashed 41 off 26 balls to propel JAM to a decent total.

In the second innings, BAR displayed a wonderful possession of scoring runs without losing much wickets. Quinton de Kock along with Corbin Bosch added 120 runs to the chasing total and cruised the Royals to the victory stand with 8 wickets to spare.

BAR is currently leading the points table and JAM is just in the following spot. So it will surely be a staggering explosive challenger to look on.

The surface at the Daren Sammy National Cricket Stadium is a well-balanced pitch. The captain winning the toss will choose to chase the target. Meanwhile, the speedsters have an advantage on this pitch in the initial overs. The spinners will play a crucial role in the middle overs.

Kyle Mayers (BAR)- The 30-year-old is a left-handed batsman and right-arm medium pacer from the Barbados-based franchise. He has hammered 285 runs and is the leading run-scorer in this tournament. He also has 4 wickets to his name.

Rovman Powell (JAM)- He is one of the most well-known power hitters in this tournament. The 29-year-old batsman has scored 200 runs in five matches so far and is the 3rd highest scorer in this league.

Imad Wasim (JAM)- He is a left-handed batsman and left-arm orthodox spinner from the Jamaica-based franchise. He can score runs with the bat whenever needed and has also picked up 6 wickets in this tournament so far.

Jason Holder (BAR)- The right-handed West Indies batter and right-arm medium fast bowler from the Barbados franchise has hunted 8 wickets in this tournament so far and is in the 4th spot among the top wickets takers in the league.

Mohammad Amir (JAM)- He is a left-handed batsman and left-arm fast bowler from the Jamaica-based franchise. He is the second-highest wicket-taker in this season of the Caribbean T20 League.

Quinton de Kock (BAR)- De Kock is a beast with the bat and a masterclass behind the wicket. He has scored 144 in this tournament so far.

Kennar Lewis is running out of form for some time in this tournament. But still, he has played some important knocks this year. Hopefully, he would find him in his rhythm in this match.

BAR has won all matches played in this tournament so far and will surely run high on confidence. JAM on the other side will try to give a tough fight to the Royals. Keeping all team analytics in mind we fancy BAR to win this match and remain undefeated in this tournament.