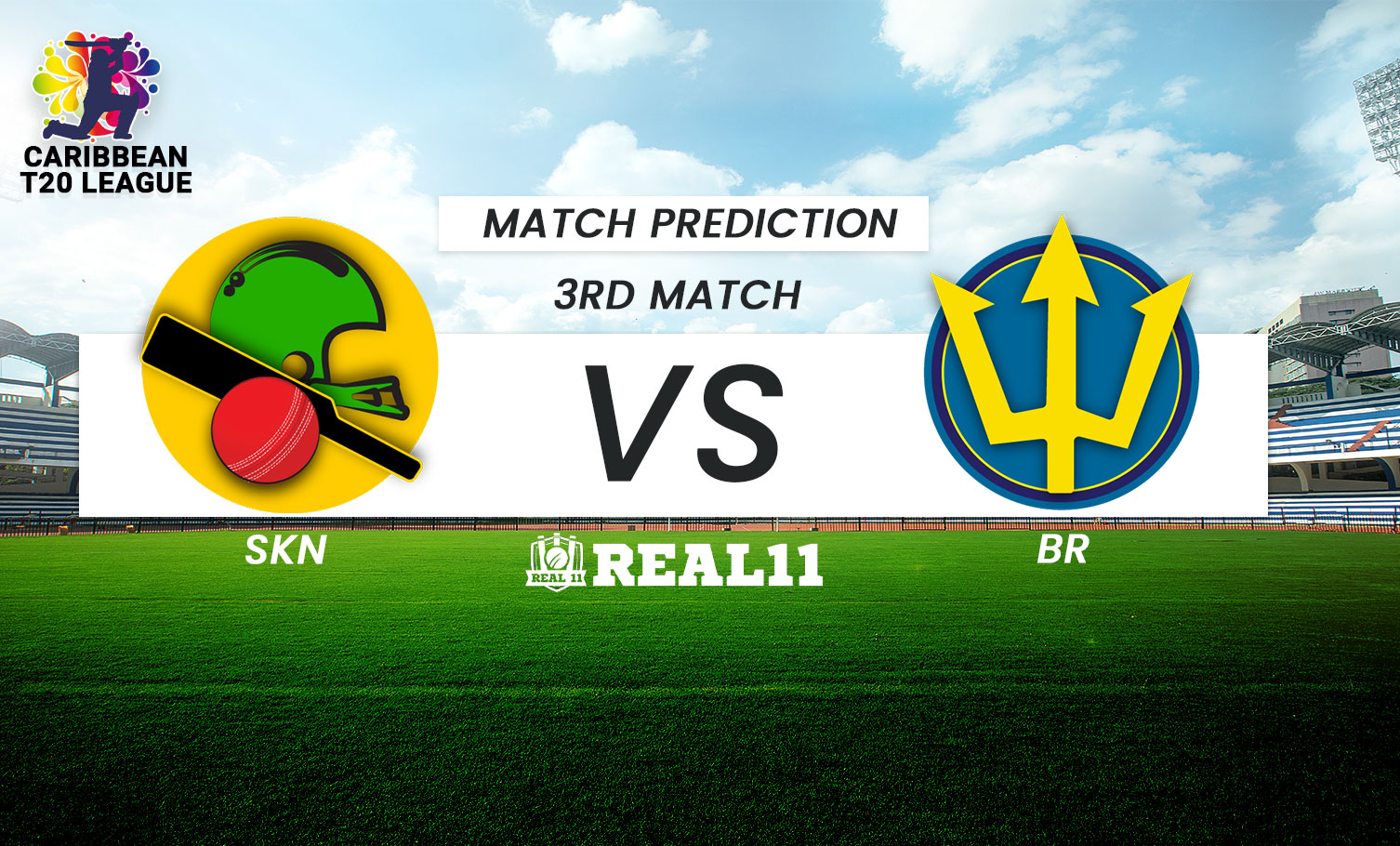 After facing a miserable loss in their first game, SKN will look to bounce back and get their maiden win of the tournament. In the last game against JAM, they were good in patches but lacked discipline. They dropped catches at crucial junctures which eventually cost them the game. The Bravo led side will face former champions BR in match 3 of the Caribbean T20 League 2022 at Warner Park, Basseterre on Friday.

BR on the other hand will play their opening encounter of the season. With three wins in 10 matches, the Royals finished last in the previous season. They would be keen to start their new campaign on a high. David Miller will lead the two time champions. The South African International who has had a start stop year in T20Is thus far will be desperate to get some runs under his belt. He alongside his South African counterpart Quinton De Kock will play a crucial role in the batting department. In the bowling prowess, BR have the likes of Obed Mccoy and Oshane Thomas.

The 3rd match of the Caribbean T20 2022 is scheduled at Warner Park, Basseterre, St Kitts. As we have observed in the previous matches played here, the venue is good for the batters. The pitch is also slow and assists the spinners with decent spin. A score of 190 is tough to chase on this pitch if the ground gets a bit slower in the second half of the game.

Evin Lewis: The West Indian opener is known for his blitz at the top of the order. He is a destructive batter who once set can cause plenty of problems for the opposition.

Dewald Brevis: He is also called as Baby Abd for his playing resemblance with AB De Villiers. The 19 year old is an attacking batter who when on song makes batting look easy.

Dwaine Pretorius: The South African international brings immense value to this SKN side with his all round prowess. He does not shy away from bowling the tight overs be it with the old ball or right at the start of the innings. Besides his impeccable control with ball in hand, Pretentious is a dangerous batter down the order.

Kyle Myres: The batting allrounder is in sumptuous touch with bat in hand. He can also pose a threat to the opposition batters with his clever mix ups with the ball.

Akhila Dhananjaya: Another instalment from Sri Lanka's production line of unorthodox spinners, Dhananjaya has all the tricks up his sleeve. From googly to doosra, the 28 year old  delivers everything with astounding control.

Obed McCoy: The left arm medium pacer has had a pretty good year in T20 cricket thus far. He had a good Ind T20 League with Rajasthan followed by a successful series against India.

Quinton De Kock: De Kock is one of the most threatening batters up the order. He is vastly experienced and has amassed over 1894 runs in 69 T20Is

Hayden Walsh Jr is our pick for this segment. He hasn’t had the best 2022 so far but we very well know what he is truly capable of.

We predict SKN to win this encounter. We believe they have a more balanced squad as compared to BR 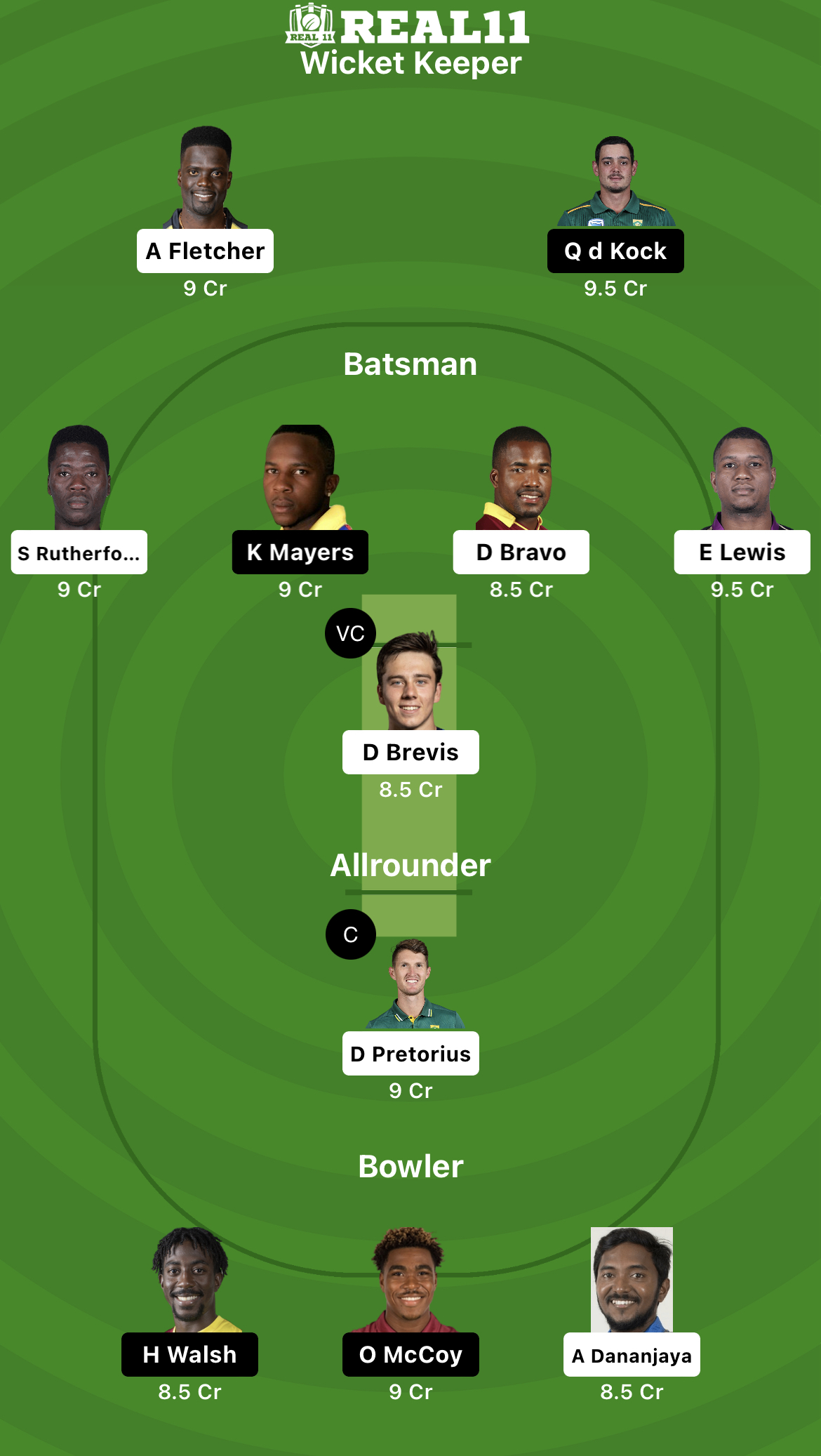