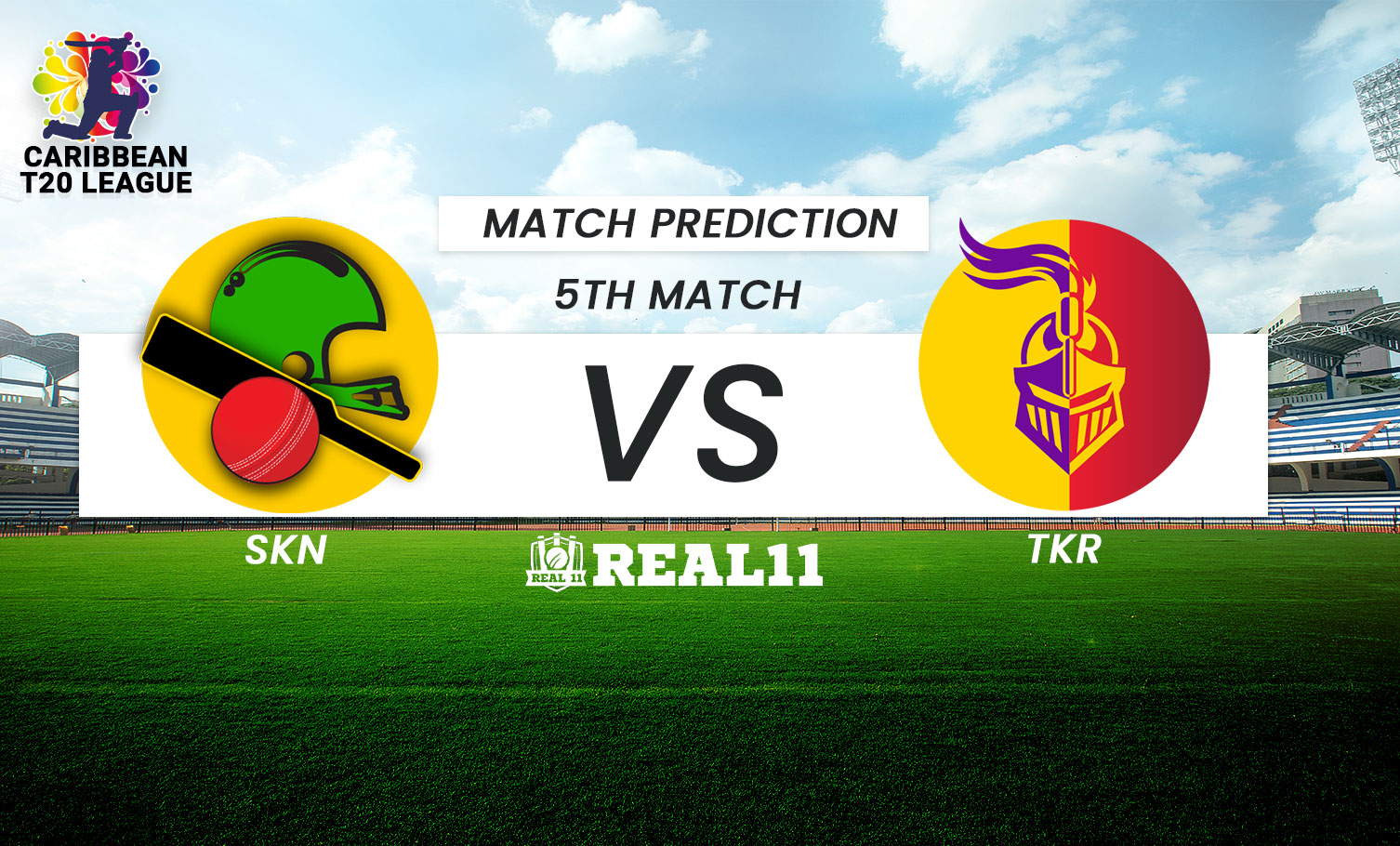 SKN and TKR will play in the fifth match of the Caribbean T20 League 2022 game on Saturday at  the Warner Park. SKN  have zero points after two games and are currently last in the standings following their most recent loss against the BR.They scored 149 runs in 17 overs, with Andre Fletcher scoring the highest with 81 runs off of 55 balls. However, the bowlers were unable to restrict this total, and the Royals easily reached the target with seven wickets and 11 balls remaining.

TKR defeated SLK by three wickets in their inaugural match. Jayden Seales and Akeal Hosein each took four wickets to restrict the opposition to 143 runs. Tion Webster led the run chase with a well compiled knock of 58 runs. TKR in recent times have the upper hand over SKN. They have defeated SKN in four of the last five games.

The St. Kitts pitch usually hosts low-scoring matches and features a surface that is good for bowling. Early on, the pacers will gain in a fair fashion. Batsmen must take more care in the early phases of the game. Spinners may be beneficial in middle innings. The surface will, however, grow more favourable for batters as the game progresses..

Dewald Brevis: South African Prodigy has been inconsistent over the past several weeks, but he can change the game on his own and is a good pick at 8.5 credits.

Tion Webster: In the most recent game, the TKR right-handed batter began the innings and played a match winning knock of 58 runs off 45 balls.

Dwayne Bravo: The experienced all-rounder has taken three wickets in each of his first two games this season. Besides his craftiness with ball in hand, Bravo possesses enough muscle to clear the fence with the bat.

Dwaine Pretorious: The star South African bowling all-rounder had a productive Hundred season with Welsh with 71 runs and four wickets to his name. But he hasn't been able to create a similar impact in the Caribbean T20 League so far with only five runs and a wicket in two games.

A. Phillip: The top bowler pick for today's Real11 team is A Phillip. He bowled brilliantly in the last few matches of the 6IXty and is also expected to bowl in the death overs.

Jaden Carmichael: The left arm leg spinner bowled with a lot of heart in the first game. He was taken for a lot in the following game but it was just one bad day in the office. The control and accuracy he possesses with ball in hand makes him a must pick against TKR.

Nicolas Pooran: After smashing 91 runs in just 55 balls in the most recent ODI encounter against New Zealand, he is expected to have a terrific season with bat in hand.

Andre Fletcher: The seasoned Caribbean batter excelled in the recently concluded 6IXTY competition and has continued that success in the Caribbean T20 League. He hammered 81 runs against the Royals in the last game after scoring 31 runs against JAM in the first game.

Nicolas Pooran was dismissed cheaply in the last game. However he has been in great form off late. So, assigning him as the captain is a risk worth taking.

We predict SKN will win this encounter. They are a competitive T20 unit who are just having some problems in rounding off games. Today might just be their lucky day. 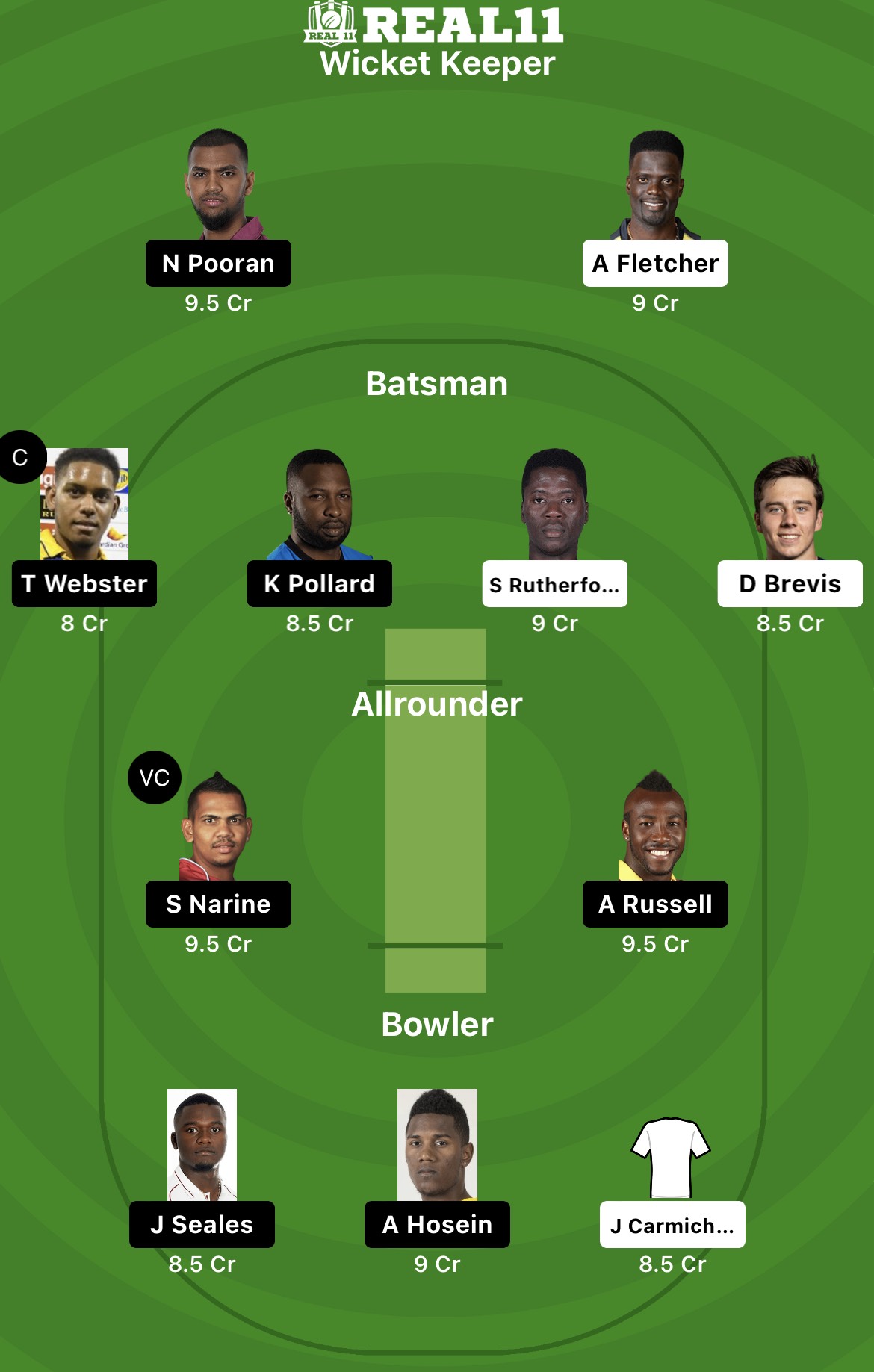