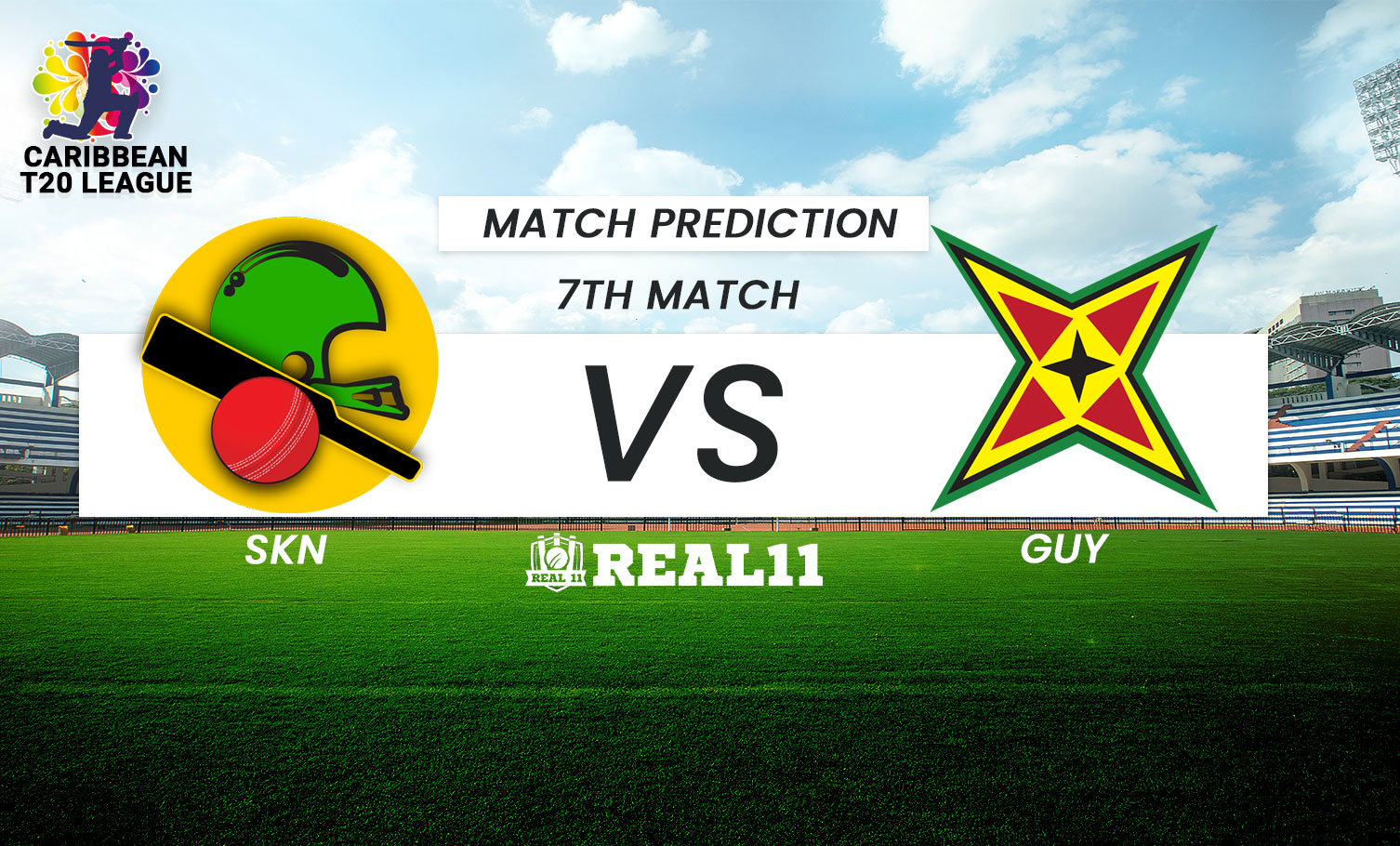 SKN will face GUY in the 7th match of the Caribbean T20 League 2022 on Monday, 5th September at Warner Park, Basseterre, St Kitts.

SKN has played in three matches so far and have won none out of them with their last match being abandoned due to rain. They will still be in search of their first victory in the Caribbean T20 League. They lost their last played fixture against BR by 7 wickets. SKN, batting first in the innings, posted 149 runs with Andre Fletcher scoring 81 runs off 55 balls. He was the only one in the team to score over 20 runs in the innings. BR’s opening pair Rahkeem Cornwall and Kyle Mayers made the run chasing as smooth as a cakewalk. Both of them added 112 runs before getting out. Mayers scored 73 runs while Cornwall posted 39 to win the match. SKN bowlers, except Dwayne Bravo who took 2 wickets, were incapable of stopping the opponent team’s firepower resulting in losing the game by 7 wicket margin.

GUY faced JAM in their first and only match played till now in the Caribbean T20 League. GUY while batting first, lost their opening pair within two overs.  Shimron Hetmyer and Romario Shephard scored 39 and 36 runs respectively to end at a decent score of 142 runs. While chasing Brandon King gave a powerful start to JAM’s run-chase and scored 32 runs. Later Rovman Powell remained unbeaten at 44 runs in just 38 balls to win the match by 4 wickets.

SKN and GUY haven’t won any of the matches they have played. They will surely give their best to register their first win in this tournament.

The St. Kitts pitch usually hosts low-scoring matches and features a good surface for bowling. Early on, the pacers will gain in a fair fashion. Batsmen must take more care in the early phases of the game. Spinners may be beneficial in the middle innings. The surface will, however, grow more favourable for batters as the game progresses.

Shimron Hetmyer (GUY)- He is one of the most popular power hitters in the West Indies national team and has been a hot favourite in franchise league tournaments.

Dewald Brevis (SKN)- He performance overwelmed his team amtes and the fans in the Indian T20 League. Also in this league tournament, he is expected to win hearts and trophies. Despite his slow start in the tournament, we cannot rule him out of our list.

Dwayne Bravo (SKN)- The West Indies veteran who is also the skipper of SKN, is one of the few players whose performance has been impressive. The way he leads his team and his ability to bowl in death overs make him one of the best choices present around.

Romario Shepherd (GUY)- One of the best all-rounders present in the team. He scored some valuable finishing runs in the last match and also picked a wicket.

Tabraiz Shamsi (GUY)- His skills in spin bowling is unmatched. He along with Imran Tahir is a threat to the opponents.

Imran Tahir (GUY)- The South African spinner predominantly bowls googlies and is also a good right-handed batsman. He plays in all three game formats, but he is usually a T20 specialist.

Andre Fletcher (SKN)- He is one of the best performers so far in the league. Hence, he deserves a spot in the hot fantasy player selection.

Although Dewald Brevis hasn't performed well in this league. He is one of the best gems to look for in any game. He has some unmatched skills and can anytime be the matchwinner for his team.

With one match getting called off and two matches lost, SKN is in desperate need of a win. On the other hand, GUY lost only a single match and is still confident to make a comeback. We fancy GUY to win this match and get their first win of the season.