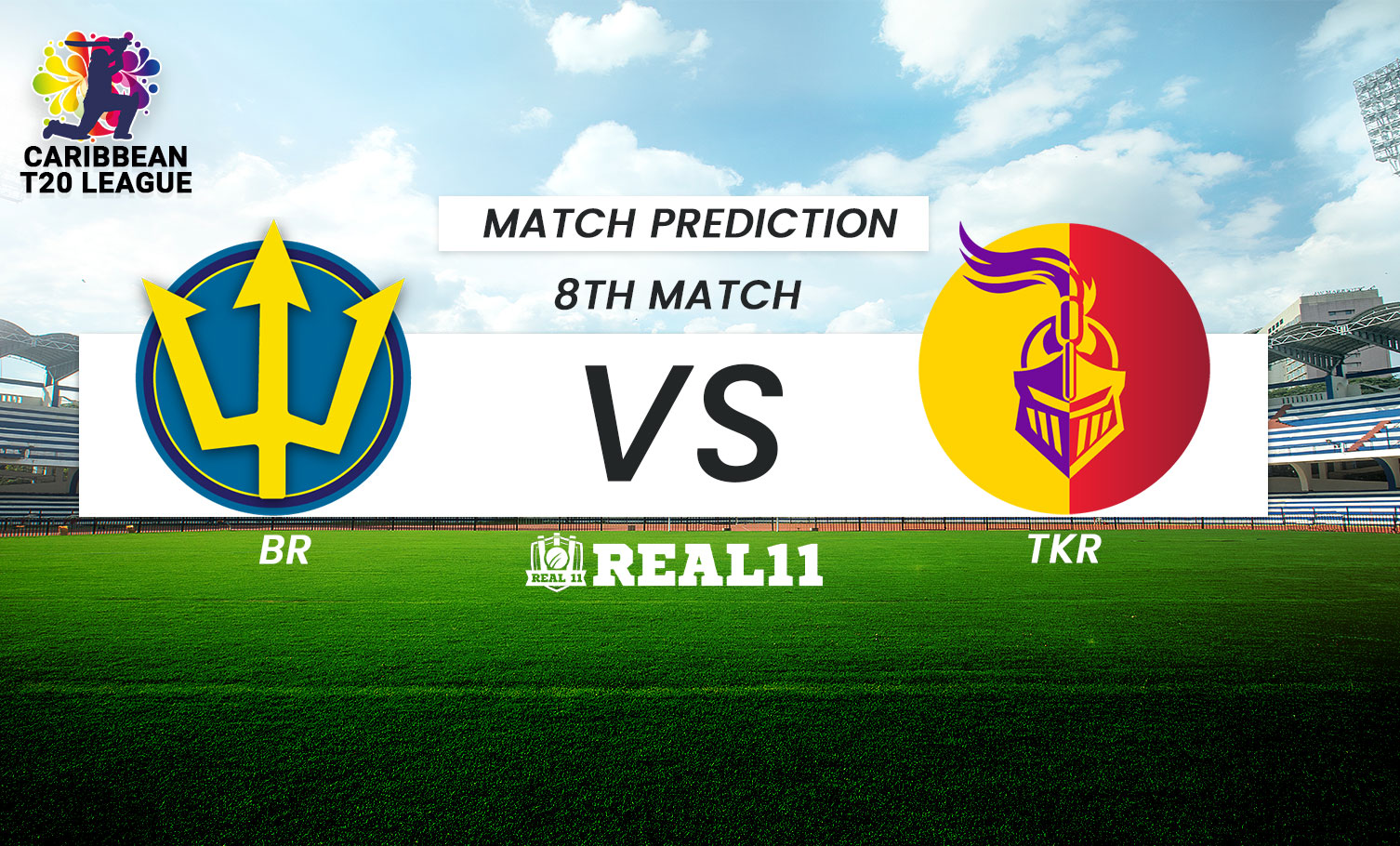 BR will play against TKR in the 8th fixture of the Caribbean T20 League 2022. The match is scheduled at the Daren Sammy National Cricket Stadium, Gros Islet, St Lucia on Wednesday, 7th September.

BR has won both of the matches played so far in this league and are currently in the second spot below JAM because of their slight low net run rate. BR batters have good coordination within themselves as we can see in the last match against SLK. While batting first, the top three batsmen namely Rahkeem Cornwall, Kyle Mayers and Quinton de Kock scored 32, 36 and 24 respectively. Also skipper David Miller crafted a great finish scoring 24 runs off 15 balls to throw a target of 162 towards the opponents. In the 2nd innings, there was a stop of play due to rain and later DLS method was applied to reduce the overs. SLK needed 102 runs in 9 overs to win the match. Kyle Mayers was the prime attention of the show as he scalped all the four wickets that the opponent lost in those 9 overs and sailed his team to their second victory of the season by 11 runs.

On the other hand, TKR’s second match was called off due to rain without a ball bowled. In their first match, SLK posted 143 runs in the first innings. Akeal Hosein led the TKR bowling attack and scalped 4 wickets to restrict the flow of runs. Jayden Seales also picked two wickets. The likes of Tion Webster and Tim Seifert eased the run chase, scoring 58 and 34 runs respectively. In the end, Anderson Philip played a beautiful straight drive over the boundary to get a 3-wicket victory over SLK.

The pitch at Daren Sammy National Cricket Stadium, Gros Islet, St Lucia is a well-balanced one which supports both the batters and the bowlers. The average score in this stadium is 140 runs. The skipper winning the toss will choose to bowl first and try to restrict as many runs as possible.

Kyle Mayers (BR)- He has started his campaign on a high note. He was the top scorer for his team in the first match and hope will continue to fascinate the fans with his performance.

Tion Webster (TKR)- He has a good record in the T10 tournament. The 21-year-old cricketer scored 328 runs at an average of 32.8 and a strike rate of 180.2. He also has four fifty-plus scores in the T10 League. In the last game against SLK, he smashed a half-century to annihilate the opponent.

Rahkeem Cornwall (BR)- He was the star of the show in the last match. While opening against SLK he scored 32 runs off just 17 balls at the strike rate of 188.24.

Sunil Narine (TKR)- The West Indies cricketer hasn’t been in his real colours till now in this season of the Caribbean T20 League. But we cannot cut off his ties with the low economy rate. In the previous match, he picked one wicket and successfully completed his 4 overs with an economy of 5.20.

Akeal Hosein (TKR)- He is an experienced player in the Caribbean T20 League with over 40 matches played so far. Hosein destroyed the opponent team by taking a four-wicket haul in the last match.

Quinton de Kock (BR)- The South African wicketkeeper-batsman has got a good start in the tournament and is expected to be better and better as the league progresses.

Tim Seifert (TKR)- He has registered 177 runs in just 11 Caribbean T20 League at an average of 22.12 and a strike rate of 112.7. He also smashed a century in a T20 Blast match in June. Also contributed 34 runs in the last match and is in great touch in this tournament.

Azam Khan made his Caribbean T20 League debut last year and played 8 games since then. The 23-year-old wicketkeeper-batsman made 178 runs at an average of 22.25 and a strike rate of 124.4 including a half-century. He may be a suitable choice for this category.

The four times Caribbean T20 League champion TKR seems to be a more confident and balanced side. BR has a fair chance of winning but keeping all stats in mind we predict TKR to win this match.