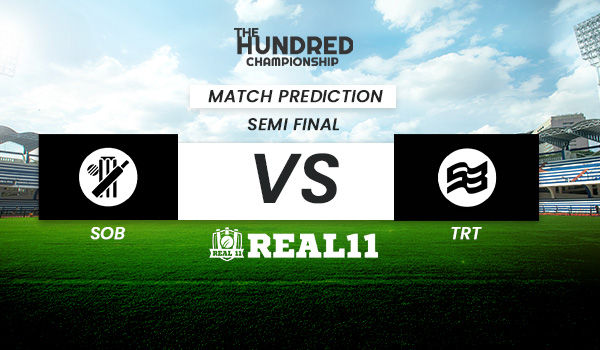 Typical of a Mahela Jaywardene coached side, SOB had a slow start, losing the first two games but came storming back as they won five out of their last six games. With the victory against OVI in their last game, Vince’s men finished at the second position in the standings with 11 points. TRT on the other side won a close contest in their last fixture against MNR   by 7 wickets and booked their place in the semis. It would be fascinating to see who would win this battle of aces. SOB have played some good all round cricket in the last couple of games. Batting has shown promise, bowling has gone better with every game and excellent collaborative work is on display. Their opponents TRT have proven match winners like   Rashid Khan and Alex Hales in their ranks who are capable enough to single handedly take the game away from opposition.

The only Semi-Final match of the Hundred Men will see Southern Brave facing off against Trent Rocket at the Oval.

The traditional Oval wicket is recognized to produce high totals. Ball comes nicely onto the bat and the batsmen are able to freely express themselves in the middle. Anything above 150 will be competitive.

Captain (Paul Stirling) - Ireland’s all time leading run scorer in white ball cricket is arguably the most destructive batsman among the two sides. The 30 year old would look to make a massive impact with his power hitting and ability to score runs at a brisk pace.  He could play a big knock in this game and placing him as the captain would not be a bad option.

Vice-Captain (D’Arcy Short) - - The Australian free flowing left hander has struggled so far in the competition. The past record is phenomenal for Short, as he has a great Australian T20 season. The southpaw would be keen to get back among the runs in a do or die encounter. Based on his reputation and our intuition we recommend you to pick him as the vice captain of your fantasy team.