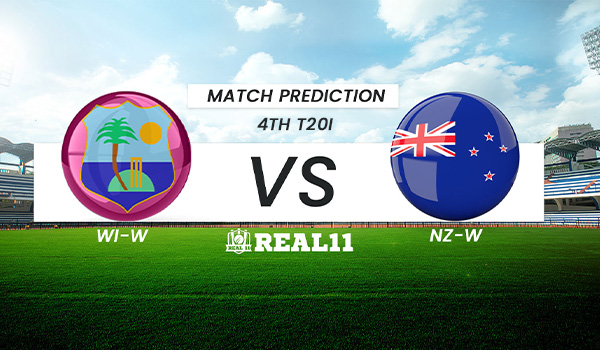 West Indies Women are set to face New Zealand Women in the 4th T20I of the five-match series on Wednesday, October 5. The match is scheduled at the Sir Vivian Richards Stadium in North Sound, Antigua.

The pressure is on West Indies to level the series 2-2 as they lost the 2nd and 3rd T20Is. The home team dragged the game deep in the 3rd T20I though they were defending only 93 runs and finally failed to defend such a small target as the White Ferns hit the winning runs at the end of the 18th over. Skipper, Hayley Matthews starred with the ball, taking a four-wicket haul. They were restricted to below 120 runs target in all the 3 T20Is played so far in this series which clearly denotes their weakness on the batting side. The batters must shine in this match if they want to level this series and keep their hopes alive till the end game.

New Zealand Women on the other side are on the curve of winning the away series. They secured 5 wickets win in the 3rd T20I match, in a low-scoring affair. Fran Jonas was the star with the ball in hand and Maddy Green played a well-paced innings which handed them a 2-1 lead in the series. They are getting the results for their efforts in both the departments and will be looking forward to a victory in this match which will mark their hattrick of wins and also seal their series victory.

The pitch at the Sir Vivian Richards Stadium is a bowler-friendly track. The powerplay phase will be important with a chance of a couple of wickets falling in both innings during the first six overs of the match. Batting first would be the ideal choice on this surface, as it slows down gradually during the game.

New Zealand Women made a great comeback with back-to-back winnings, it is hopeful that they will keep the winning streak and get ahead of West Indies Women in this match. Also with this win, they can seal the series victory so they will be eyeing the very best performance they can perform. We fancy New Zealand Women to win this match ahead of the home side.