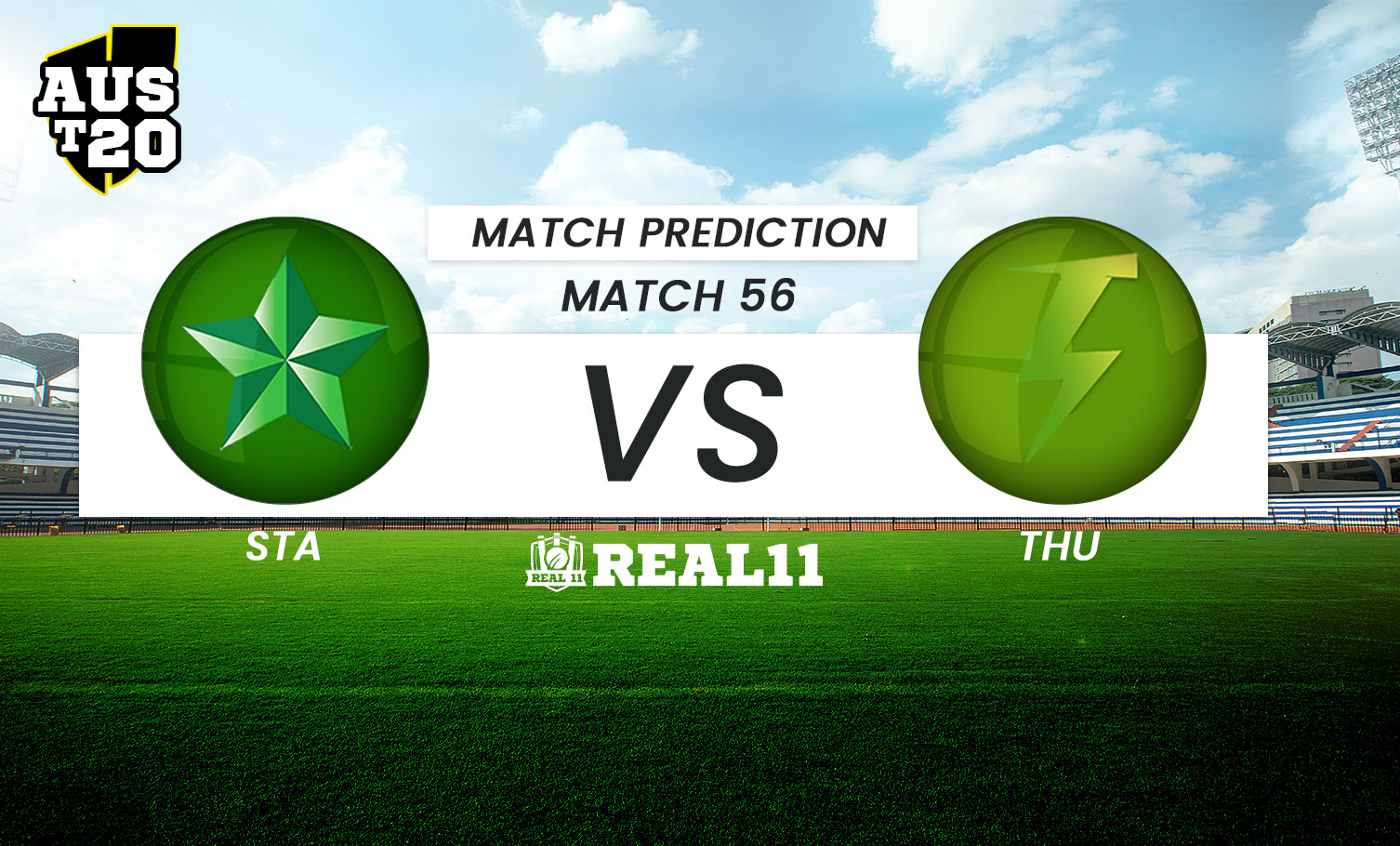 The last match of the group stage of the Australian T20 League will occur between STA vs THU in the historic Melbourne Cricket Ground on Wednesday, 25th January 2023, at 01:45 PM IST. This will be the most crucial match for THU as they need to win this match at any cost to qualify for the playoffs. Although STA is eliminated from the league, they can be the party popper for THU.

STA has struggled this season, earning only 6 points from their 13 games. Their previous game versus Heat ended in a 4-run loss for them. However, the heat defeated the Stars in a thrilling finale after the tight game. Marcus Stoinis and Hilton Cartwright battled to the last ball for Melbourne, but it was too late.

THU lost to the STR by a score of 125 runs in a game they will never forget. They were dismissed for a pitiful 62 runs while chasing a goal of 187 runs. The Thunders want to surpass this crushing setback soon since it was one of the AUS T20 League's most crushing losses.

Talking about the STA, they want to forget this tournament but finish it on a high note. In their last match, they fought head-to-toe but couldn’t cross the finish line. Thomas Rogers scored a quick 41 in 20 balls but didn’t get any support from another end. Stoinis and Cartwright fought till the end and had a crucial 50 runs partnership, but they fell short by four runs.

On the other hand, THU has an extremely little chance of moving on to the tournament's next round despite having a good season with six victories in 13 games. They had a promising start to the season, but three defeats in a row shook their momentum, and one was historical. Nevertheless, they will give their best in their last match against the STA.

In their previous match, they were entirely overwhelmed and outplayed by the Sixers. While SIX for 62 runs after THU set them a goal of 188 runs, not a single batsman accepted responsibility. The Thunders will attempt to forget and continue their lives as quickly as possible since there were simply no positives in the game.

The Melbourne pitch has a balance for both bat and ball. The Surface has a good bounce for the pacers, and ground dimensions will be crucial for them. But since it is an evening match, the due will play a vital role in the game. The team winning the toss want to chase here.

The Weather of the match will be slightly cloudy, and the temperature will revolve around 28℃ and 16℃ with a wind speed of approximately 14 km/h in the north direction.

Joe Clarke: Joe Clarke is the highest run scorer of the STA. He opens for Melbourne and can give you some initial points in the last match.

Thomas Rogers: Thomas Rogers can be an excellent addition to your fantasy team. He will add some good points to your playing XI. He is here after scoring some valuable runs in the last match.

Oliver Davies: Oliver Davies is the current top scorer for THU. He has a good Six hitting ability and can give you many points on his day. He is also a good C/VC option.

Beau Webster: Beau Webster can be a good All Rounder option for your team. He has scored 260 runs and has six wickets in the bag. You must add an option in your fantasy 11.

Luke Wood: Luke Wood has some express pace and has 19 wickets in his account. The Melbourne pitch will help him to get some early wickets.

Nathan McAndrew: Although he is not the top wicket-taker, he will be an excellent economic, and crucial wicket-taking bowling option. It can be a good addition to the team for middle-over points.

This is a game of life and death for THU, but the STA play without any monkeys on their backs. On the other hand, the Thunders will attack the Stars with all their might. We predict THU will beat the STA in the final blow of the league stage. 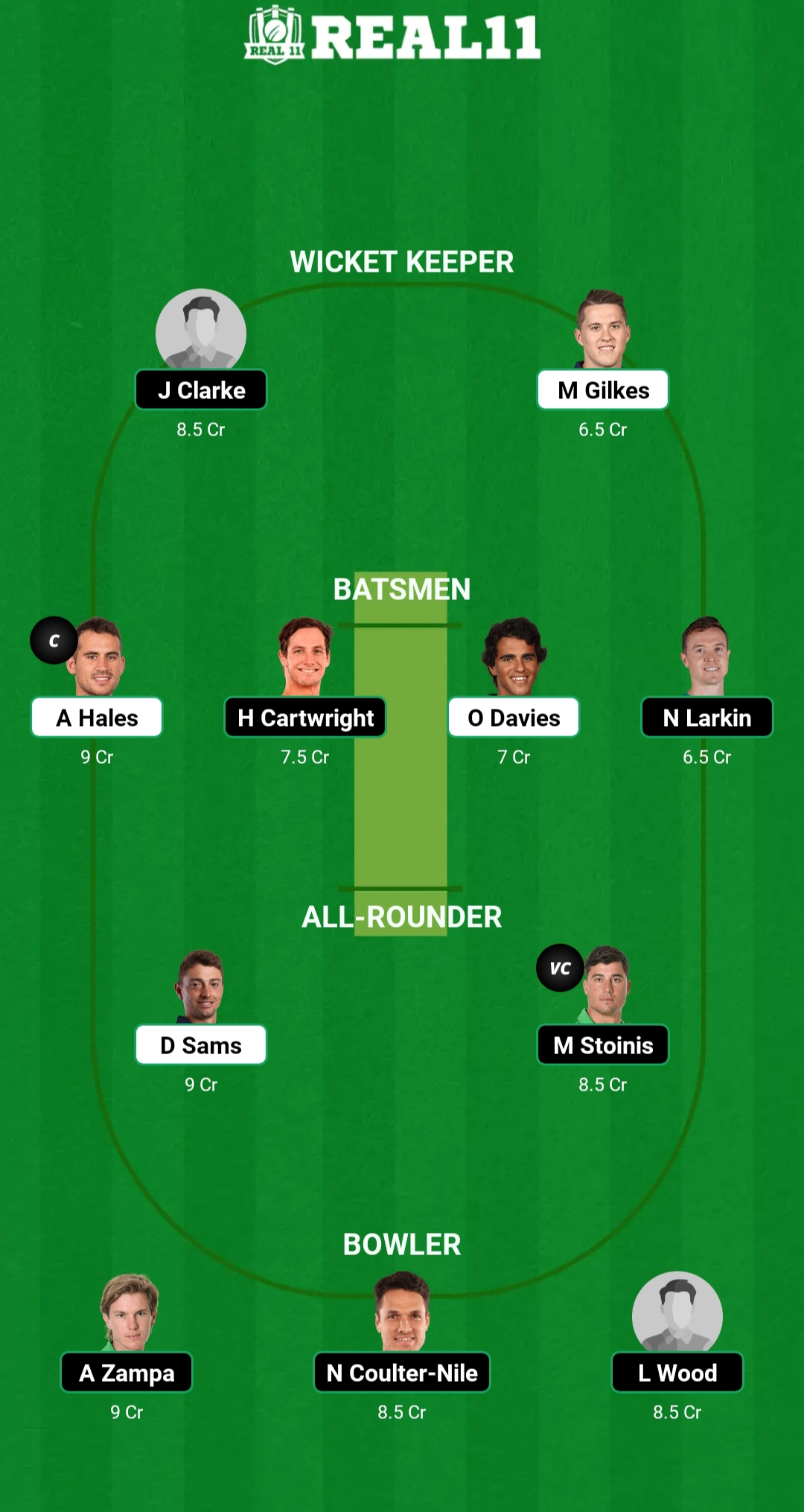