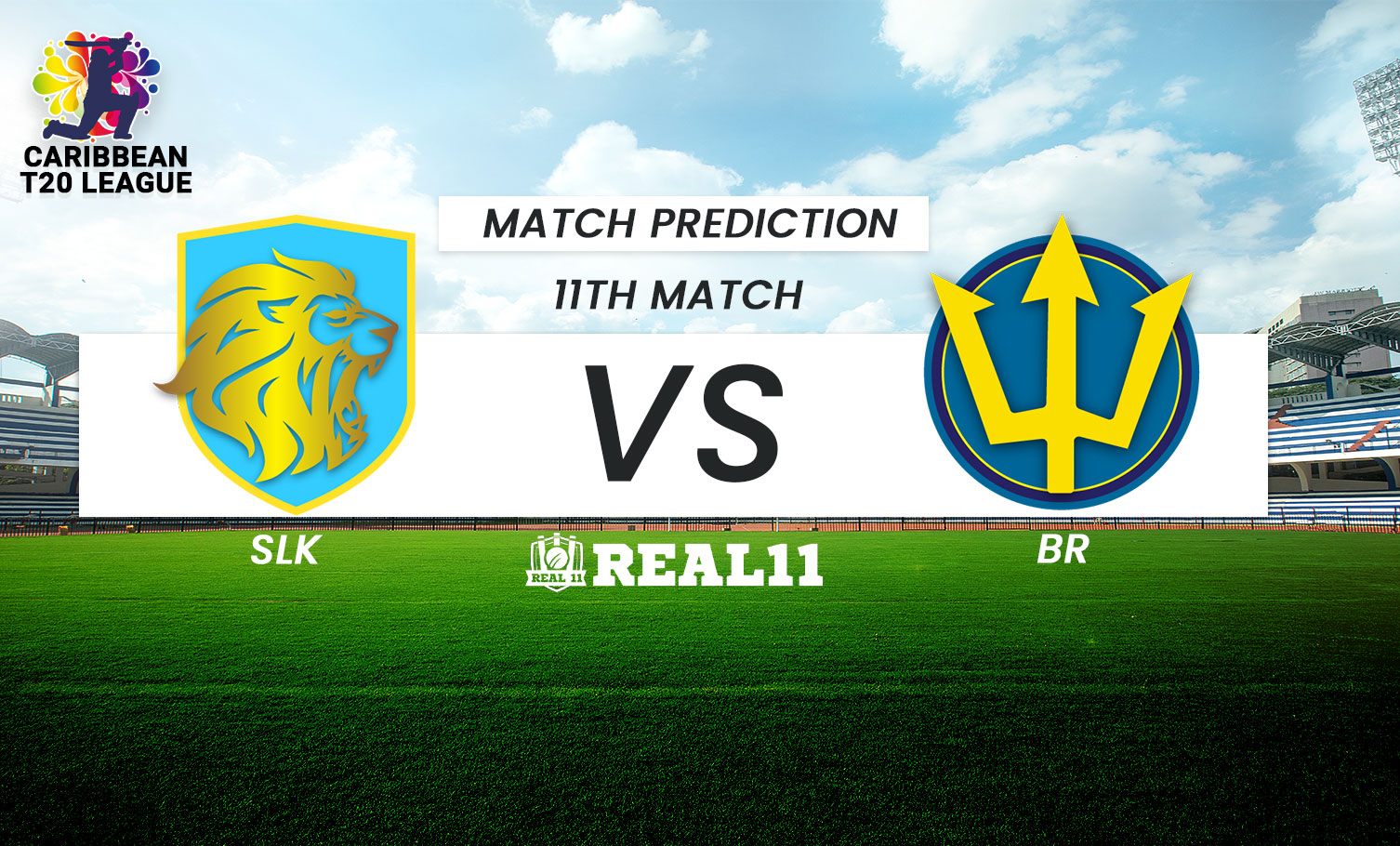 SLK and BR are going to clash for the second time in this edition of the Caribbean T20 League. The match is scheduled at the Daren Sammy National Cricket Stadium, Gros Islet, St Lucia on Friday, Saturday 9th.

BR has displayed a phenomenal team spirit this season and have won all three matches they played so far and are occupying the top spot of the league table. On the other hand, SLK have won just one out of their three matches in their inaugural match against JAM. St. Lucia-based franchise are in fourth place in the Caribbean T20 League points table. They have two back-to-back losses in their first two matches and a win in the third match. Now the stage is all set for them to fight hard and defeat the best-performing team in this league to regain their confidence.

In their 4th match of the league where they clashed, BR emerged victorious on SLK by 11 runs. The match was affected by rain and hence DLS method was also applied. In the first innings, BR scored 162 runs, losing just 4 wickets. The top-order batters influenced a pretty high-scoring target. Rahkeem Cornwall and Kyle Mayers played astonishing knocks of 32 and 36 respectively. Later BR skipper David Miller smashed 24 runs off just 15 balls to anchor the innings and put on a target of 163 runs on the opponents.

The match was reduced to 9 overs in the second innings because of a cloudburst. SLK’s top-order batters failed miserably except skipper Faf du Plessis. He smashed 47 runs off just 20 balls with Alzarri Joseph also contributing 29 runs off 18 balls. In the end, it was just 11 runs which resulted in their defeat. Kyle Mayers was the star of the bowling side as he scalped all four wickets of the opponents.

The pitch at Daren Sammy National Cricket Stadium, Gros Islet, St Lucia is suitable for both the batters and bowlers in white ball cricket. As we have seen in the last few matches, the pacers will get better bounce and pace on this surface. A score of 170 is expected from the first innings of the match.

David Miller (BR)- He scored 60 runs in 36 balls while playing against the TKR, the best team in Caribbean T20 League.

Kyle Mayers (BR)- He also smashed 52 runs in just 33 balls while opening against TKR. He is in great touch and hopes to continue with this form for the rest of the season.

David Wiese (SLK)- He was a star player against JAM. He scored the final 20 runs in the second innings and took 2 crucial wickets to register their first win in the tournament.

Rahkeem Cornwall (BR)- Although he didn’t power in the last match but has stunned everyone with his superlative performance in the first and second matches.

Alzarri Joseph (SLK)- His performance in the first two matches signifies match-winning ability. He is one of the hottest picks from SLK in this league.

Obed McCoy (BR)- He scalped a couple of valuable wickets to win the last match against the mighty TKR.

Johnson Charles (SLK)- He played a knock of 62 runs off 39 balls to win the match against JAM in the last match.

Quinton de Kock (BR)- The South African keeper-batsman is a phenomenal keeper and an exceptional keeper. He played a knock of 44 runs in just 34 balls.

Tim David (SLK) has performed exceptionally well in the Men’s Hundred T20 Tournament. He got 3 matches to fit into this style of the tournament. We sincerely hope he will fire up in this match against BR.

BR have completely outplayed the best team TKR in the competition. Also, they appeared fearless in front of all the teams they played so far in this season. This year has been more beneficial for the Barbados-based franchise. SLK found their first win of the season after two back-to-back defeats. BR is in fine form at this moment and we fancy them to win this match too.