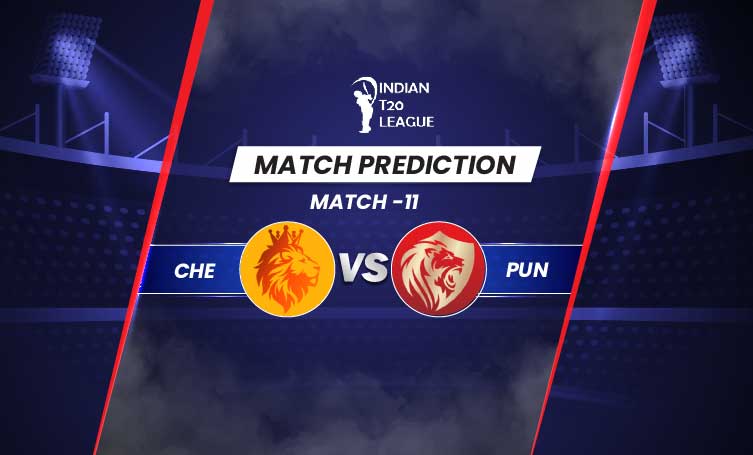 CHE vs PUN After consecutive losses in its first two games, defending champions Chennai will look to get their campaign back on track against a rejuvenated Punjab side. The two teams will meet each other at the Brabourne Stadium, Mumbai on Sunday. Both teams suffered defeat in their recent fixtures. Chennai were battered by Lucknow whereas Punjab faced a crushing loss against Kolkata.

After back to back defeats, Jadeja and co will be desperate to get the first win of the tournament. In the last game against Lucknow, the men in yellow lost the game despite putting 210 runs on the board. Uthappa, Dube and Rayudu played good knocks to put the reigning champions in a commanding position. Dhoni’s late flourish ensured Chennai ended the first innings on a high. With 210 runs on the scoreboard, Jadeja’s men were clearly on top but not for too long.  Rahul and De Kock onslaught pushed the four time champions on the backfoot. But, it was the penultimate over which shifted the game in Lucknow’s favour. Skipper trusted Dube to bowl the 18th over of the match which resulted in 25 runs. Lewis and Badoni played sensibly to make a tough chase look easy.

Punjab will look to get back to winning ways when they take the field on Sunday. In their previous encounter against Kolkata, Mayank and co faced an embarrassing defeat. Batting first Punjab were bundled out for 137. They showed character with ball in hand but eventually failed to defend the meagre total. Agarwal, Rajapaksa and Dhawan will be the batters to watch out for whereas Chahar, Rabada and Arshdeep will hold the key with ball in hand.

Chennai are struggling to find their feet in the tournament so far. Punjab on the other hand have had a start-stop season thus far. Both will be eyeing a win to set the tone of their 2022 campaign. We fancy Jadeja and co to win this one.

Robin Uthappa is in fine form with bat in hand.  He is one of the few Chennai batters who has looked comfortable in the middle.

Dwayne Bravo is the all time leading wicket taker in Ind T20 League. He can deceive the opposition batters with his clever pace variations.

Shikhar Dhawan has shown promise with bat in hand. Hasn’t been amongst the runs but we predict the southpaw to do well in this game.

Shahrukh Khan is striking the ball well for Punjab. Apart from his prowess as a destructive batter, the youngster is also a safe fielder. Having him as the skipper of the fantasy team is however a stretch.