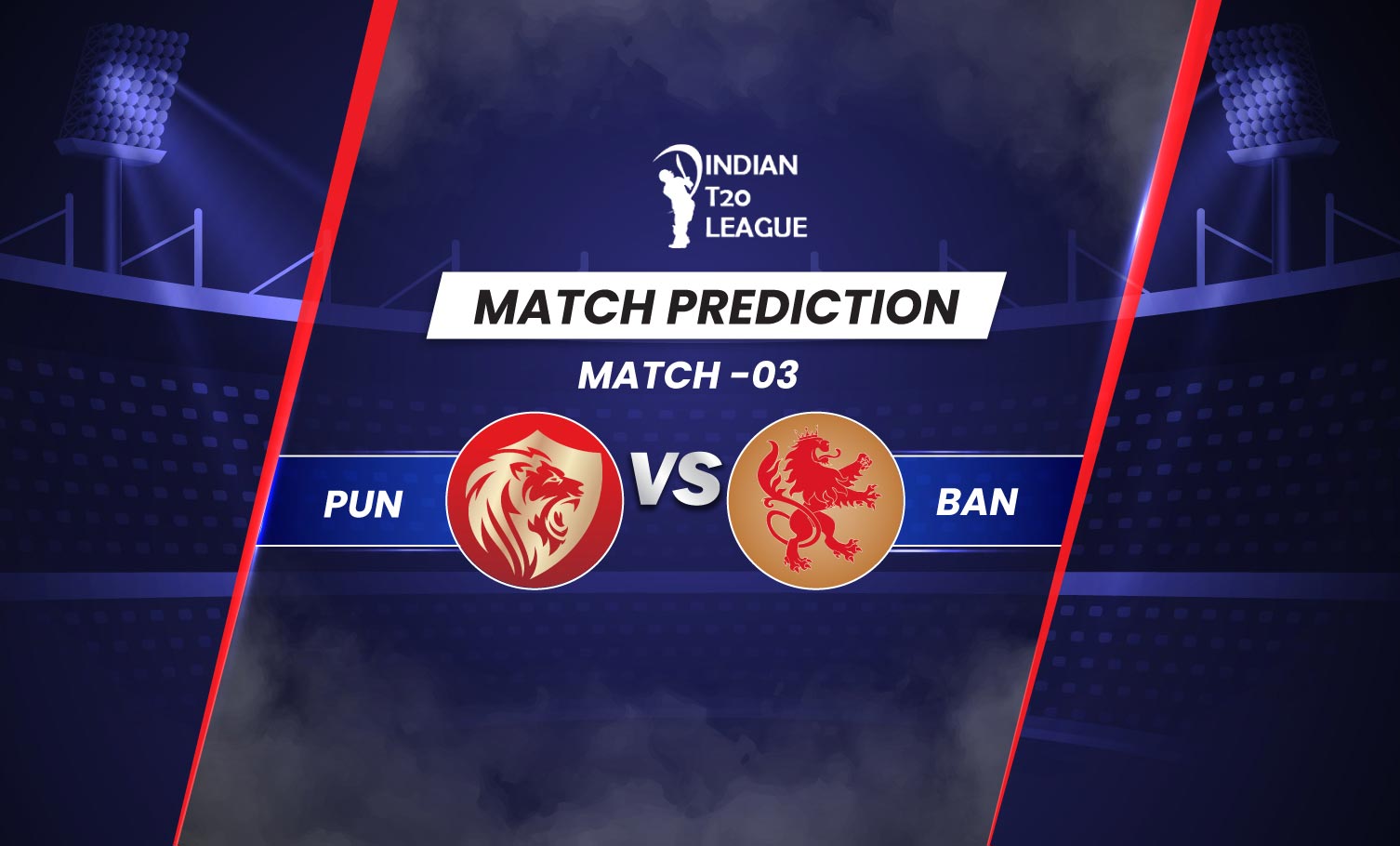 The two teams who never won a single edition of the Indian T20 league will challenge each other on Sunday with the hope of winning their maiden title. There have been a lot of developments in both these teams as the ever dependable KL Rahul is no longer a part of the Punjab squad and on the other hand, Virat Kohli has relinquished his captaincy this season. With Faf captaining the Bangalore team and Mayank Agarwal captaining the Punjab squad, expect some fresh energy and enthu this season and maybe one of these two talented batters will take the trophy home.

Things aren't very simple though. Punjab will be missing the services of Jonny Bairstow and Kagiso Rabada in this match and that's a massive blow. Shikhar Dhawan will replace KL in the top order but their inexperienced middle order is a concern. Now, Shahrukh Khan, Rishi Dhawan and Liam Livingstone are some excellent choices but they are not tested enough and that's a huge problem. A lot of eyes will be on Raj Angad Bawa, who set the U19 World Championship and Ranji Tournament on fire. If Anil Kumble and company can groom this talent, he surely can be an asset to the Punjab team for years to come.

Coming to the bowling department, a lot of pressure will be on Rahul Chahar and Sandeep Sharma. The moment Kagiso comes, it looks like a different team all together but without him in the side, the bowling looks really weak. Harpreet Brar was really good last season and the team will hope for the same from him this season.

Now moving to Bangalore, the team tried everything in the past but failed to capitalise when the time came. Without AB De Villiers in the squad and Virat as a captain, the team is moving towards a new direction and Faf Du Plessis is a fantastic choice as a leader. Virat as a batter will have more time to focus and like Harsha Bhogle said that if Virat plays 75% of how he played in 2016, Bangalore will fight for the championship. They will miss Glenn Maxwell for the first couple of matches and Anuj Rawat will be replacing him in the squad. He is said to be in tremendous form in the practice matches and thus, look out for this guy. Dinesh Karthik and Wanindu Hasaranga will bring stability in the middle order. This is very important for the team as this was one such area which always struggled.

Mohammed Siraj and Harshal Patel will be key for the Bangalore team. The duo was great last season and along with Sherfane Rutherford, the team should go for glory this season. They have a decent squad overall.

The pitch will help the spinners with the time. Bowling first will be ideal in this pitch. The ground is relatively small and you will see some hits.

With the given squad, Bangalore should get the win in the first match. Punjab is heavily dependent on Mayank Agarwal and Shikhar Dhawan and if they fail to perform, the team will be under extreme pressure. Bangalore has a lot of options and that's what makes them a slightly better team.

Shikhar Dhawan – Shikhar Dhawan is one of the reasons why Delhi played so good in the last couple of seasons. He was in terrific form in the series againsta Sri Lanka and he can cause some real damage if he gets into his zone.

Faf Du Plessis – The Bangalore captain was the second highest run-scorer in the tournament last season. There are a lot of expectations from him this season. He makes a great fantasy player as the player contributes a lot in the fielding department as well.

Mayank Agarwal – Mayank Agarwal knows the culture and there's hardly a season you can recall where the opener hasn't contributed with the bat. He will have a decent season for sure. Picking him is a must.

Virat Kohli – Who other than Virat Kohli? We all know that he isn't in the kind of form he is known for but you simply can't put out of your fantasy team. He can change the complexion of the match at any point and that's what makes him such a dangerous batter.

If you are ready to take the risk, captain Anuj Rawat in this match. He is a great hitter of the ball and like said, showed his class in the practice matches. You can take a bet on him and increase your rank in the process. 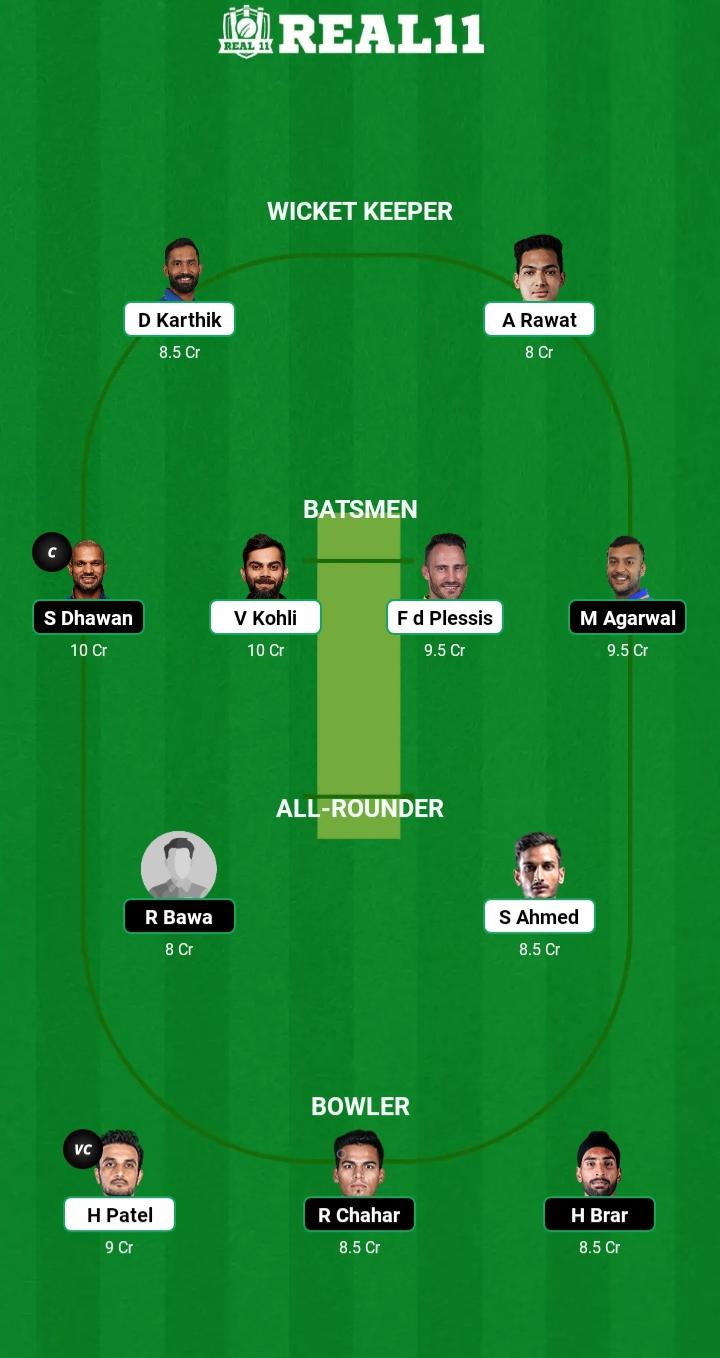