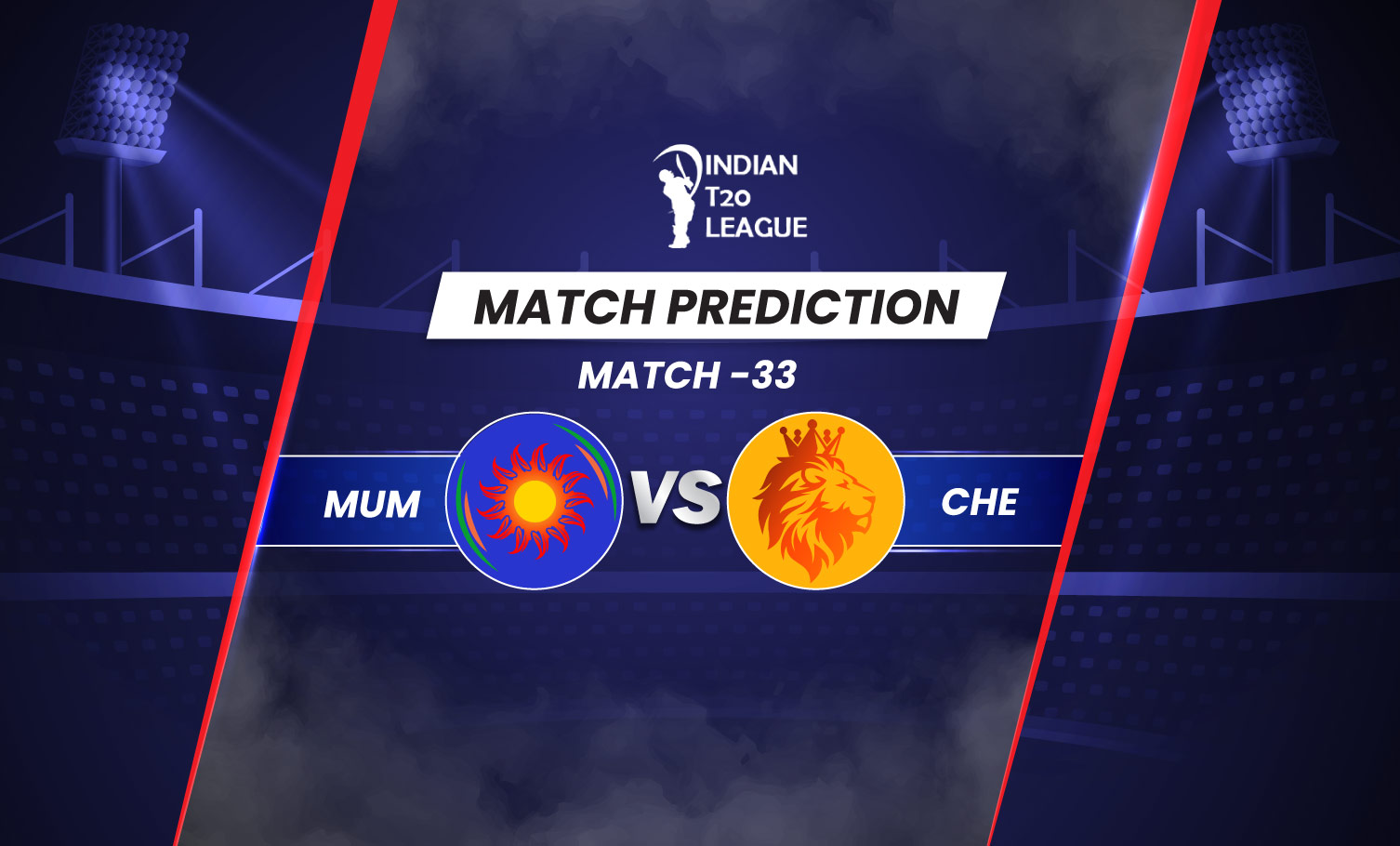 The biggest rivalry in the history of the Indian T20 League is here to take you by storm. Wait a minute though, if you are a newbie and look at the points table, you would probably say, “Kahe ka rivalry bhai?” and then the fans of both these team will say, “Jake dekh record mai”. Well, they might not explain you in simple terms though. Mumbai lost all their six games while Chennai lost five of their six! The el classico of Indian cricket is more of an L classico at the moment but fate of either of them will change in this match and that will be the only positive as a spot for a playoff looks pale for both these teams.

If we talk about Mumbai first, their openers are hardly contributing. Ishan Kishan started the season well but lost his touch completely. Rohit Sharma, the captain of the ship is out of form for quite some time now. Dewald Brevis and Suryakumar Yadav along with Tilak Verma are the pillars of this team. Out of these three, only Suryakumar is getting the big runs, the other two aren’t capitalising on their good start. Pollard tried to hit some shots in the last match, did his best but couldn’t finish the match. When it comes to bowlers, Bumrah has been pathetic. The entire bowling line-up depends a lot on him and if he misfires then you can understand the kind of pressure the team will be in. Jaydev Unadkat looked good in the last match but he is not the kind of player you can depend on. The team doesn’t even have proper back-ups and that’s a huge problem. The 5-times champion’s needs to address a lot of issues but at the moment, only their batters can resolve the situation they are in. Can Mumbai make a comeback in the league? Very tough.

Coming to Chennai, the defending champions are in the second last position as of now. No one is quite sure what their strategy was but the team failed to sign top-notch players who can create a real difference. Ruturaj Gaikwad got back his mojo in the last match and that’s a huge plus point for the team. Shivam Dube and Robin Uthappa looked good so far and that’s it. No other batter has been good enough and they might regret letting Du Plessis go! Moeen Ali was retained ahead of him but the Englishman is yet to come to the party. MS Dhoni started the season well but he’s back to his usual self. There’s a lot of room for improvement and the team needs to. Same goes for their bowling. There’s no fire in the team and it looks like the team is not hungry for victory! That’s the sad part. Can Chennai make a comeback in the league? Tough.

A great place to play and batting is relatively easy on this ground. The Pacers will get the bounce and even 180 can be tight to defend. Bowling first will be ideal and dew won’t affect the match.

It’s a tough one to call. It’s a do or die for Mumbai and they will come all guns blazing. Chennai might have the upper hand as some of their players are in sublime form.

Dewald Brevis is playing some good cricket lately. The 18-year-old is also called Baby AB and he is playing quite well. He just needs to learn how to finish matches and then Mumbai will have a sorted future for sure.

Ruturaj Gaikwad is one such player that you cannot leave behind especially after the last match. The Orange Cap winner of last season has joined the party late but the team will hope that he sticks to his form now!

Suryakumar Yadav is the best player in the Mumbai franchise right now. You cannot keep him out as he’s likely to give you the most number of points. On his day, he can demolish any opponent.

Shivam Dube’s form makes him a top fantasy pick for this match. The kind of threat he imposes is humongous and not having him will be a mistake for sure.

Rohit Sharma is a dangerous, dangerous player. He’s out of form and it is a bit risky but if he gets going, he is one such player that can cause a lot of damage if gets going. He can create a huge difference. 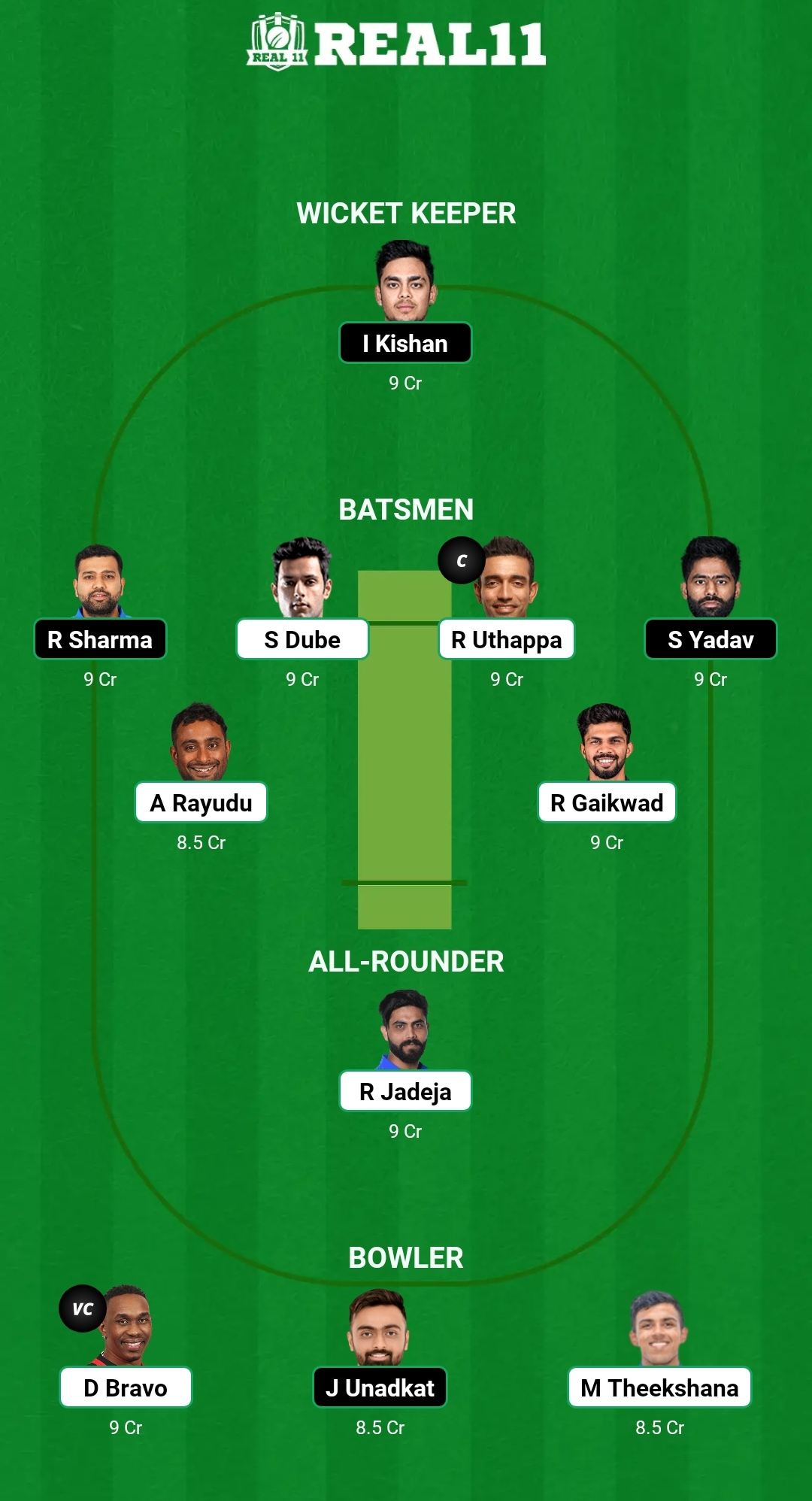