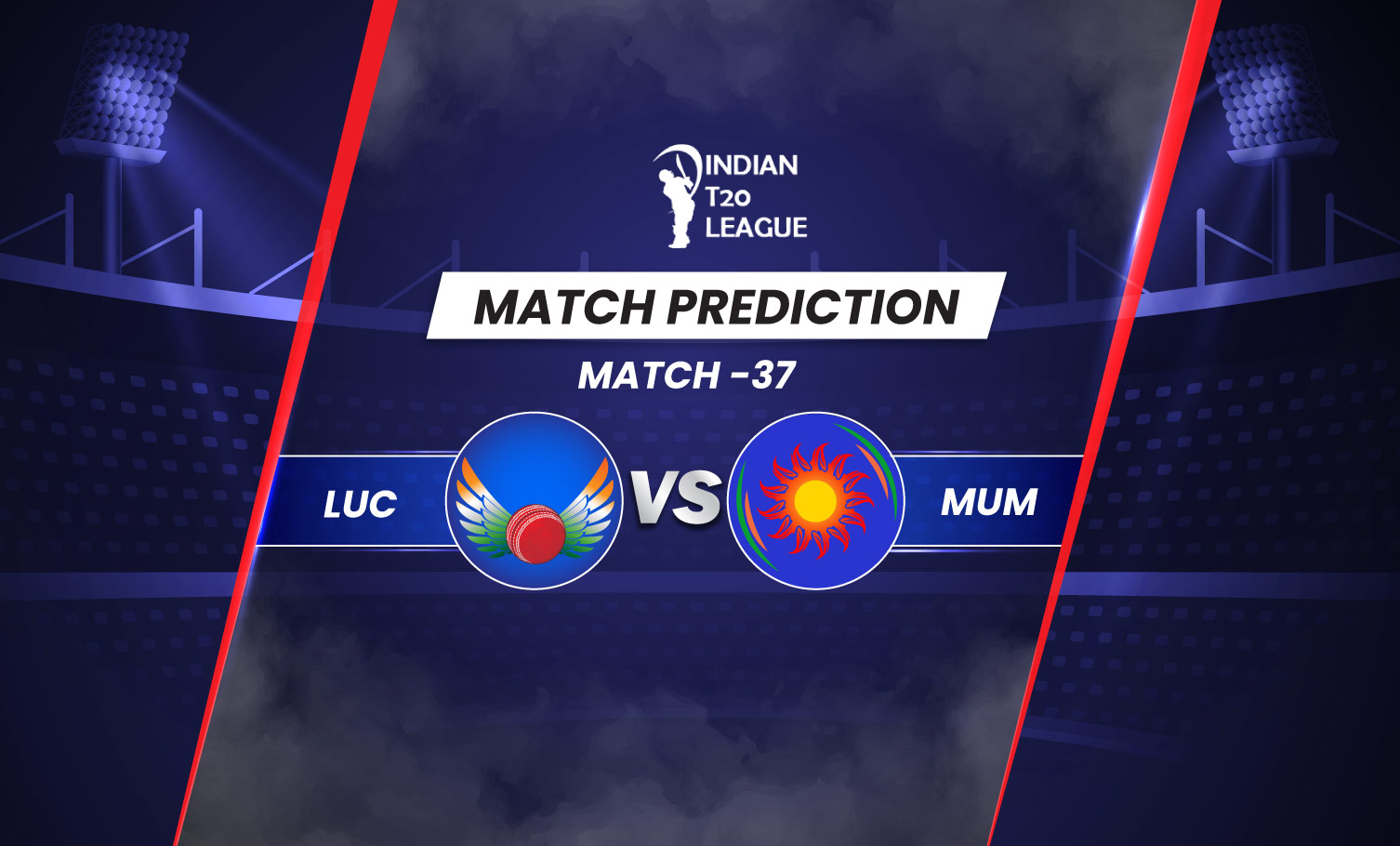 Oh Mumbai, what really happened to you? After a heartbreaking defeat in the hands of Chennai in the previous match, the five-time champions now became the first team to lose all their opening seven games! Not only did they have a poor auction but except Suryakumar Yadav, none of their star players are playing well and that’s not helping them at all. With some little hope, they will challenge the Lucknow side that’s doing well in the tournament. Even though they lose their last game against Bangalore, the team has the capability to make a comeback and send a statement.

Coming back to Mumbai, the team has probably tried everything they can but nothing has worked so far. The senior pros of the team need to step otherwise there’s absolutely no hope. Rohit Sharma, Ishan Kishan and Kieron Pollard are simply not playing up to their potential. Dewald Brevis is giving them the start but unfortunately, the boy is not making it big. Tilak Verma’s strike rate is an issue and thus the entire pressure comes to Suryakumar Yadav. He is the only pillar of the team and thus, the team is crumbling. When it comes to bowling, Jasprit Bumrah has been a flop show as well. They are taking wickets in bits and pieces and that is not how you can win matches, let alone winning tournaments. Things of course need to change but they have tried a lot of things and nothing really worked for them. What next? Bringing Arjun Tendulkar into the mix? C’mon Mumbai, act like Champions!

Lucknow’s problem has been their consistency. You can’t really place your bet on any particular player. Either of KL Rahul and Quinton De Kock is playing well and someone from their middle order is stepping up. The team is playing some quality cricket but in order to win the tournament, they need to be a bit more consistent with the bat. Bowling has been good. Avesh Khan did well in the recent games but failed to click one in the last match. That shouldn’t be a matter of concern also. Sri Lankan pacer Dushmantha Chameera has been inconsistent as well. You never know when he will come and pick a wicket. Rest, in terms of selection, the team is more or less sorted and they don’t have to rotate their squad. With some form, they can be a dangerous team to beat.

Expect plenty of runs. The pacers will get some help but the batters have the ability to dominate. Bowling first will be ideal if there’s no dew and expect a high-scoring game.

Lucknow will of course be the favourites in this match but you simply can’t rule Mumbai out. It’s true that they are in terrible form right now but things can change massively if any of their star players click.

Quinton De Kock is one such player who can change the complexation of the match. Against his former team, De Kock will want to score a lot of runs and he is in form. So, it should be a safe bet if you pick him.

Avesh Khan is someone that you simply can’t leave behind. He didn’t take any wicket in the last match but he has the potential to take a lot of wickets.

Dewald Brevis is a hard-hitting batter and you can never leave out these kinds of players. He’s yet to come to the party but he will soon come and may create some sort of record. He’s got immense potential for sure.

Ishan Kishan needs to do much better but the boy has tremendous will power and that will help him succeed. Captaining him will be a big risk but if he gets going, he can create a real difference. 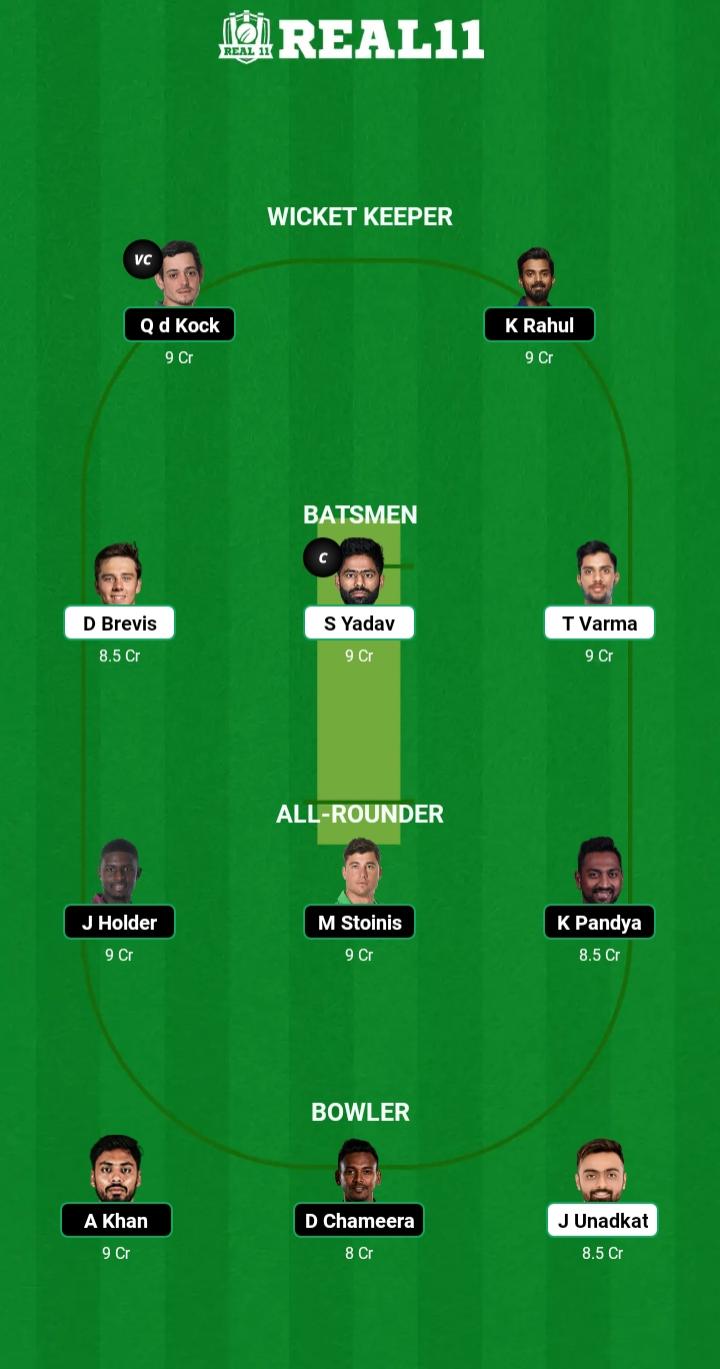 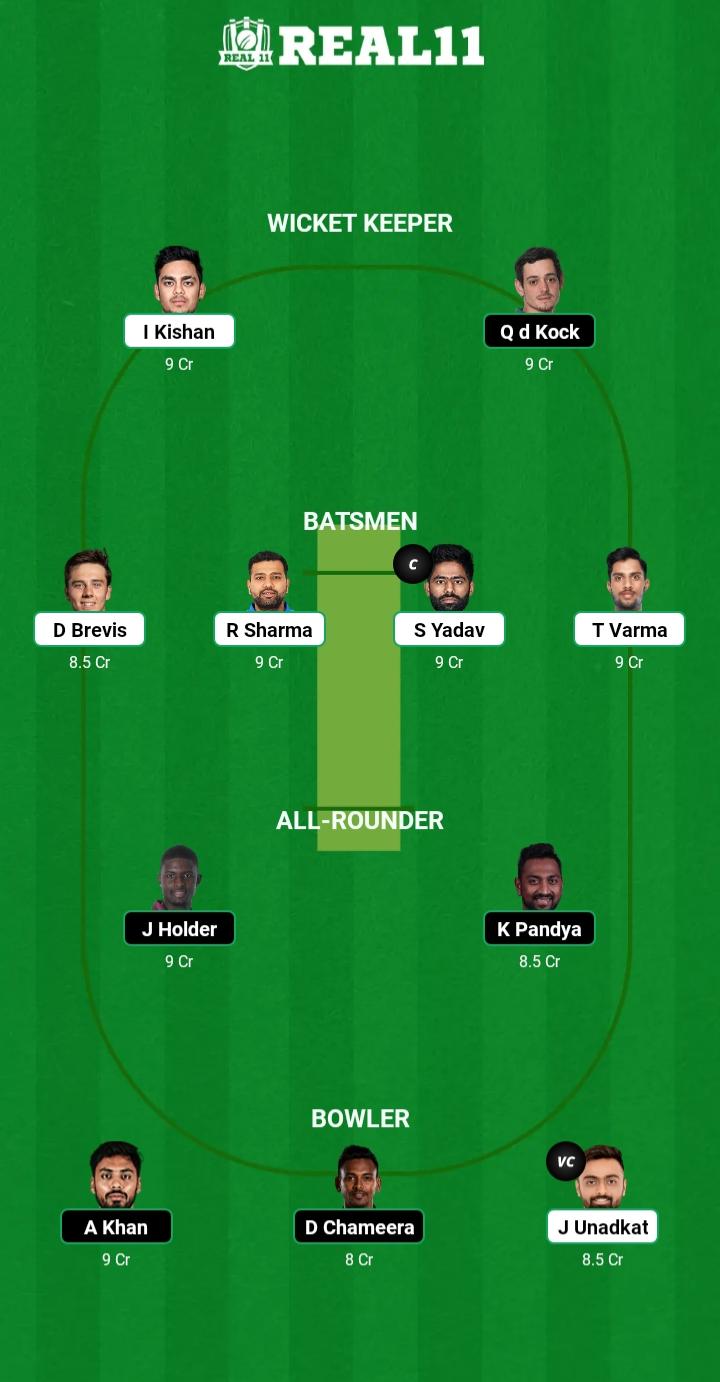