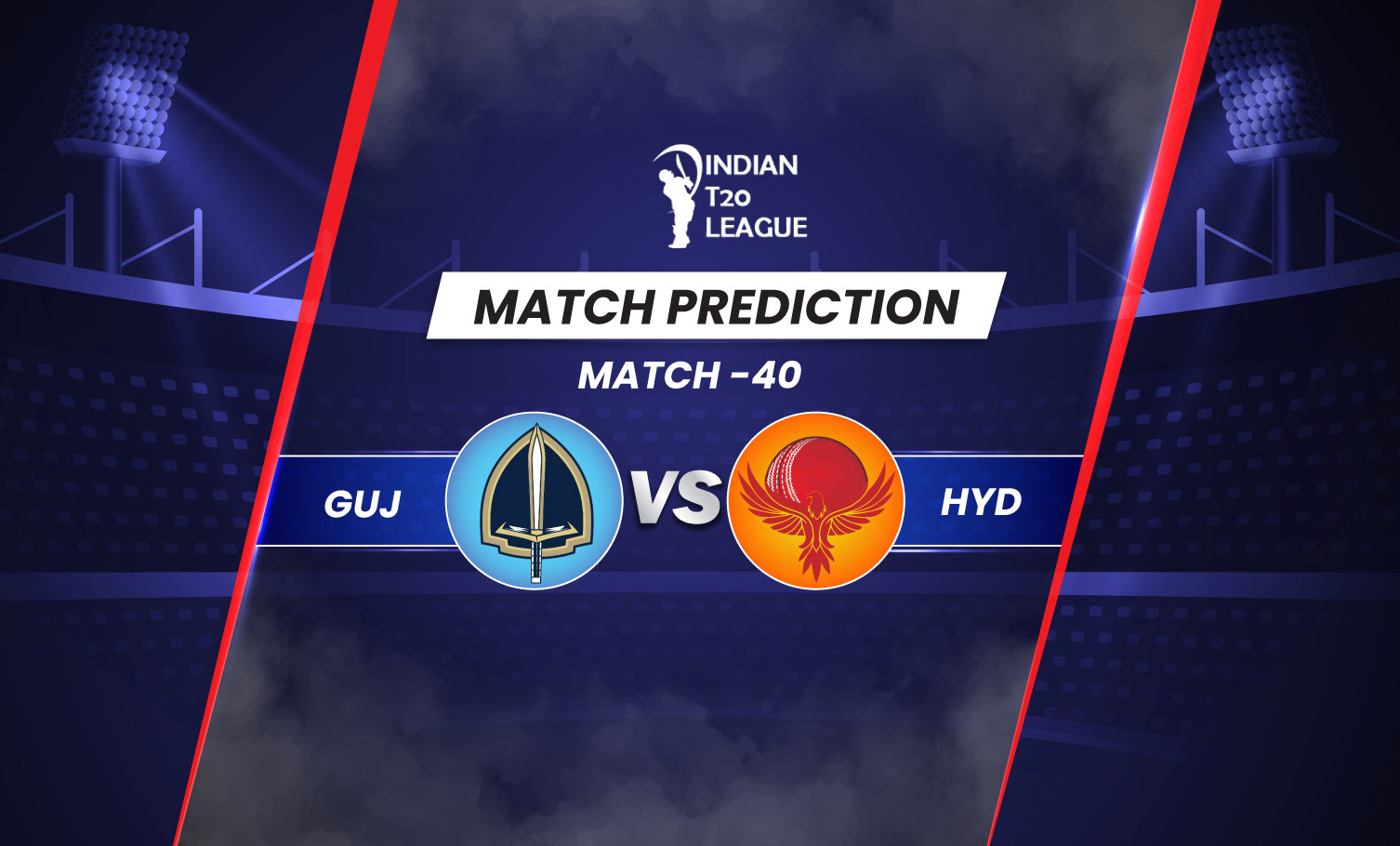 Both these teams are on song and enjoying quite a run in the Indian T20 League and most importantly, are the first two teams in the tournament. After a very slow start and two back to back defeats to start with, Hyderabad sent a statement by winning 5 matches on the trot. Gujarat, on the other hand, is the most consistent team in this season. Someone or the other is stepping up every time and whatever you say about Hardik Pandya will be less. The Gujarat Captain has returned from injury and stunned everyone. Be it with batting or bowling, he has been fantastic and is the heartbeat of the team.

Talking about the Orange brigade, their bowling line-up has changed the dynamics of the team. We have said this a lot of times and we will say it again that the combination of Bhuvneshwar Kumar, T. Natarajan, Umran Malik and Marco Jansen is doing a brilliant job and all four of them have different qualities and Captain Kane Williamson use them perfectly and that is exactly why Hyderabad are doing so well in the tournament. When it comes to batting, Abhishek Sharma has given them a good start. They do miss Washington Sundar in the middle and once he returns, the squad will look much better. Till then, Kane Williamson needs to get back in form. Rahul Tripathi is their main batter at the moment and Aiden Markram has also done well in patches. They look like a really dangerous team at the moment and the best part is that they got over David Warner and Rashid Khan, two most dangerous players that the team had.

Coming to Gujarat, the team has been phenomenal. You can’t say that all the players are in form but someone or the other always steps up and changes the complexion of the match. Their captain is a fearless man and he instilled that confidence among his teammates and that’s the biggest reason behind the success of the time. Just like Hyderabad, Gujarat too has a very strong bowling line-up. Rashid Khan, Lockie Ferguson and Mohammed Shami can destroy any bowling line-up and on top of that, Yash Dayal is picking important wickets and giving Gujarat a much needed advantage. When it comes to batting, the team was suffering at the top. Matthew Wade was throwing his wicket and the team was unable to build any pressure. Wriddhiman Saha played really well and if he continues, the problem will soon get solved. Hardik, as already mentioned, is in fine form and should be the first name in the list when India announced their squad for the World Series. Shubman Gill, David Miller and Rahul Tewatia stepped up whenever the team needed. Thus, it can be said that the team looks perfect before they take on Hyderabad.

Bowling first will be the obvious choice and the teams should make a lot of runs. The pitch will favour the batters and even a score of 180+ might not be safe on this ground. Expect spinners to come to the party.

Gujarat lost its only match in this season and that was against Hyderabad. So, the team will be all set to take some revenge and Hyderabad will hardly give any space. Even after that, we fancy Hardik Pandya and co. to get the win and break Hyderabad’s momentum.

Rashid Khan is a must pick. Regarded as a T20 specialist, the spin wizard is a safe bet. You can even consider him to be the captain of your side. He can give you a lot of runs from both batting and bowling.

Abhishek Sharma is in red hot form at the moment. He is striking the ball cleanly and making a real difference. He has got a lot of potential and this is the best time for him to play some good cricket and put his name forward for a potential call-up in the Indian team.

Hardik Pandya is a must for any team. The captain of the Gujarat franchise has been brilliant so far and is excelling in all the departments. He is expected to give you a lot of points.

Umran Malik is destroying every opponent that is coming his way. With sheer pace as his weapon, the speedster is playing some quality cricket and who knows, with this kind of form, he can get a national call-up soon!

Wriddhiman Saha played well in the last match and he is someone who can score some good runs in a quick time. It is a risky choice to captain him but you can take the punt. 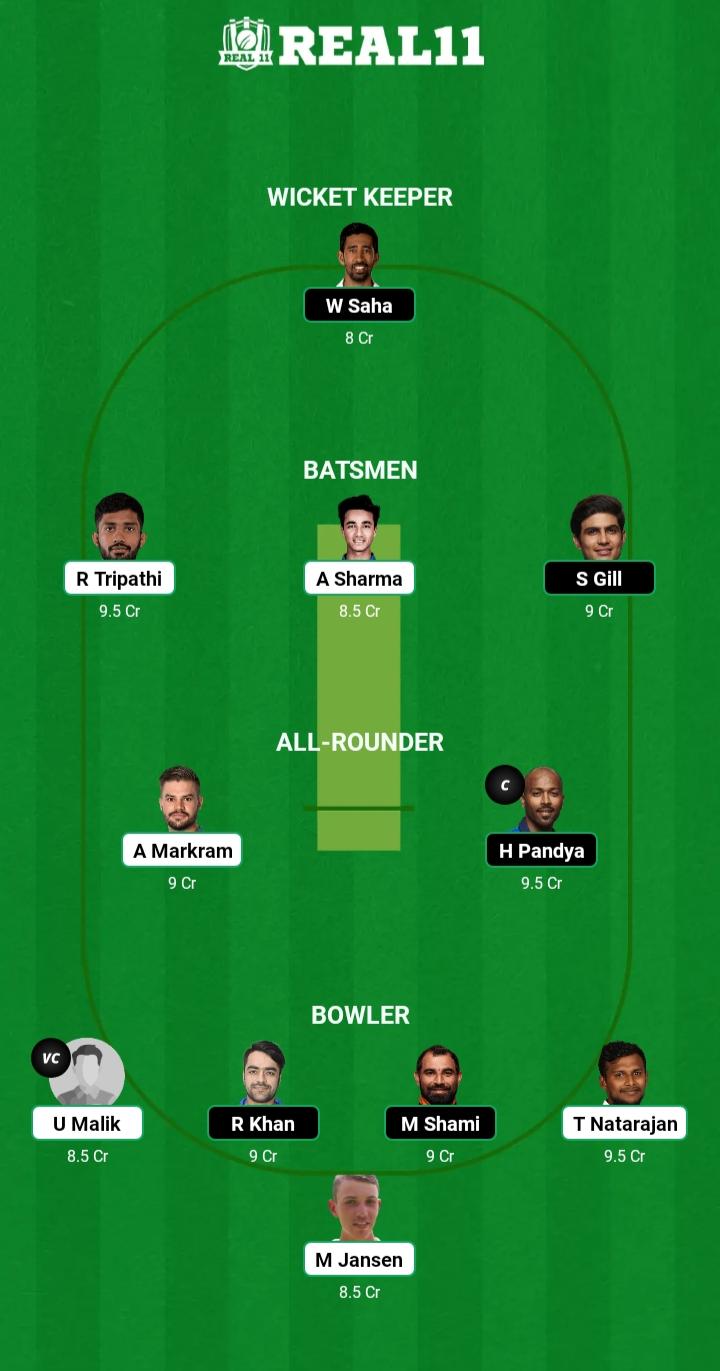