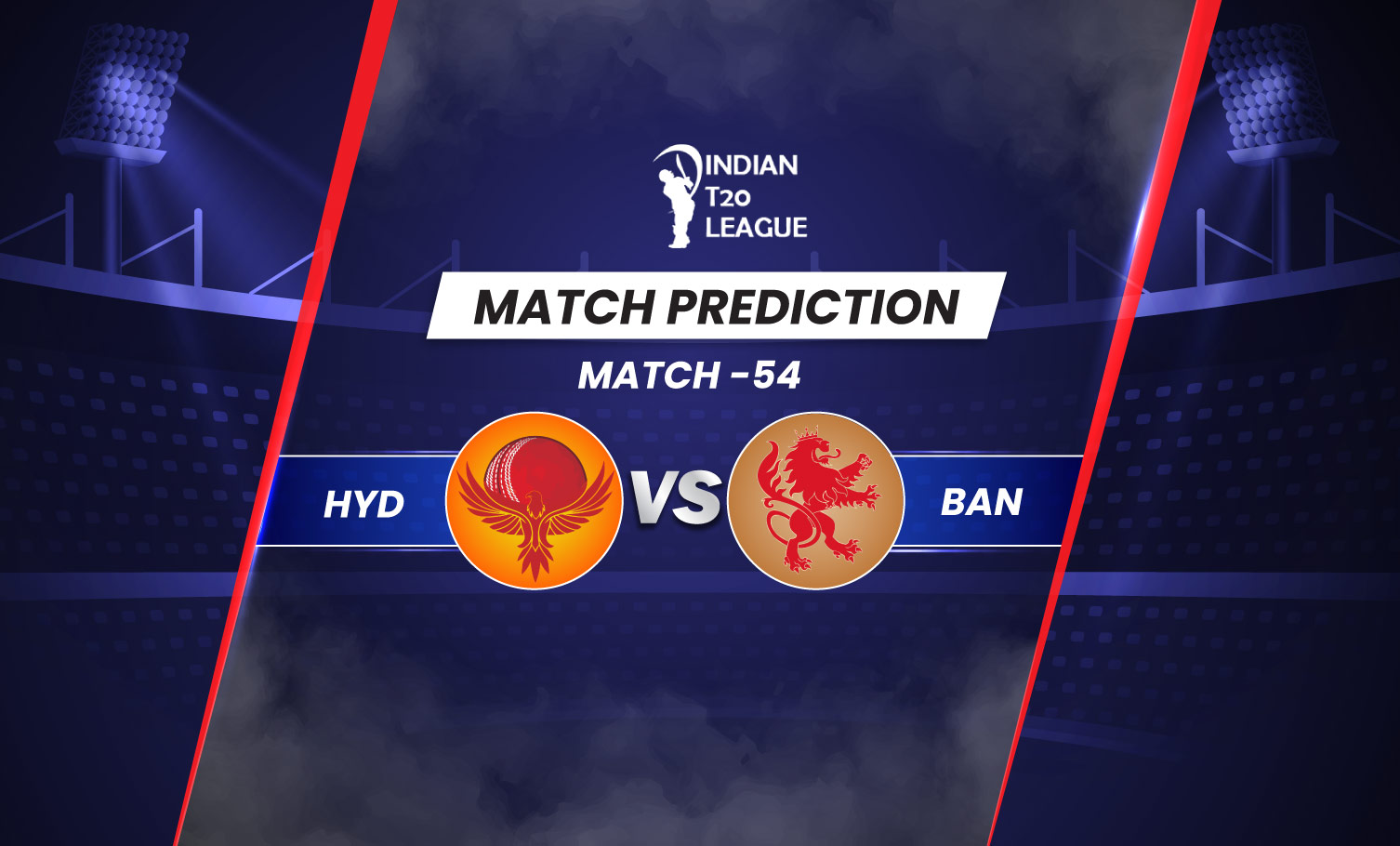 Hyderabad versus Bangalore is definitely going to be a cracker of a contest as both these teams will be gunning for a win and will aim to solidify their place in the top four. Bangalore did lose their momentum in the middle and lost a couple of matches before winning their last match against Chennai. Hyderabad after winning five matches in a row lost their last two matches and will hope to make a comeback and improve their position in the league. There are a lot of concerns for them at the moment and they need to address them immediately.

Talking about Bangalore first, Kohli has blown hot and cold in the last few matches. He needs to get the runs and help Bangalore win their maiden trophy of the season. He has been the captain of the ship for a long time and he needs to inspire the young brigade to do well. Mahipal Lomror and Rajat Patidar are getting the runs but there's room for improvement. Dinesh Karthik’s dip in form can also be a matter of concern for the team. Wanindu Hasaranga has lived up to his expectations and has helped Bangalore in crucial junctures. The problem is with his batting. As an all-rounder, the Sri Lankan needs to contribute with the bat and should get inspired by Odean Smith, considering the fact that the West Indian has the ability to win games from an unnatural situation. Glenn Maxwell has been decent so far while Harshal Patel’s return back to form will be a massive boost to the team. Mohammed Siraj can and should work on his strengths as the Miyan bhai of Indian cricket has been inconsistent and for Bangalore to do well, Siraj needs to get back his touch.

We say this a lot and we will say this again that Hyderabad’s strength is their bowling. Unfortunately, in the last couple of matches, their bowlers were pretty average and that is why the team failed to get the job done. Kane Williamson, the captain of the team needs to do well and lead by example but it hasn’t been the case so far. He was retained ahead of Warner and Rashid Khan but the Kiwi hasn’t impressed in the tournament so far. Washington Sundar has been pretty average as well and Rahul Tripathi lost his mojo after a good start to the season. Abhishek Sharma has been good but the youngster needs to convert his starts into big totals and Aiden Markram despite being good can get better. The introduction of Shreyas Gopal and Sean Abbott didn’t make much sense in the last match and both of them failed to live up. The team is definitely missing T. Natarajan, who is not playing at the moment because of an injury.

Wankhede is a pitch where the batters often get that much needed help. It’s a batting paradise and the team batting second will get a lot of advantage. Thus, bowling first will of course be the ideal decision.

It’s a tough call but Bangalore might be just a bit ahead of their opponent. Hyderabad has a good, tight squad but when it comes to team balance, Bangalore is better than Hyderabad.

Nicolas Pooran is a must pick. After a very slow start, Pooran has changed his gears and is playing some good cricket. Once he gets going, it’s very tough to bring him down. Bangalore bowlers will have a tough job to control his aggression.

Wanindu Hasaranga has been Bangalore’s standout bowler this season. With 16 wickets from 13 matches, Hasaranga has delivered so far in the season and Captain Faf would want him to continue his form as we are in the business end of the tournament.

Umran Malik has by far been Hyderabad’s best bowler this season. The Indian speedster went for a lot of runs in the last match but has the potential to change the game at any point.

Glenn Maxwell is a proven game changer in this format. Although, he isn’t in the best of forms lately but it is just a matter of one game. He has single handedly won many games for his side in the past and we expect him to be back at his very best.

Kane Williamson is in terrible form at the moment. The dashing Kiwi is badly struggling with his innings. But this is not the first time we are seeing Williamson battling to score runs. He has survived the tough phase many times. Once Williamson gets his eyes set, he is very hard to contain. You can take a gamble by assigning him as the captain of your fantasy team. 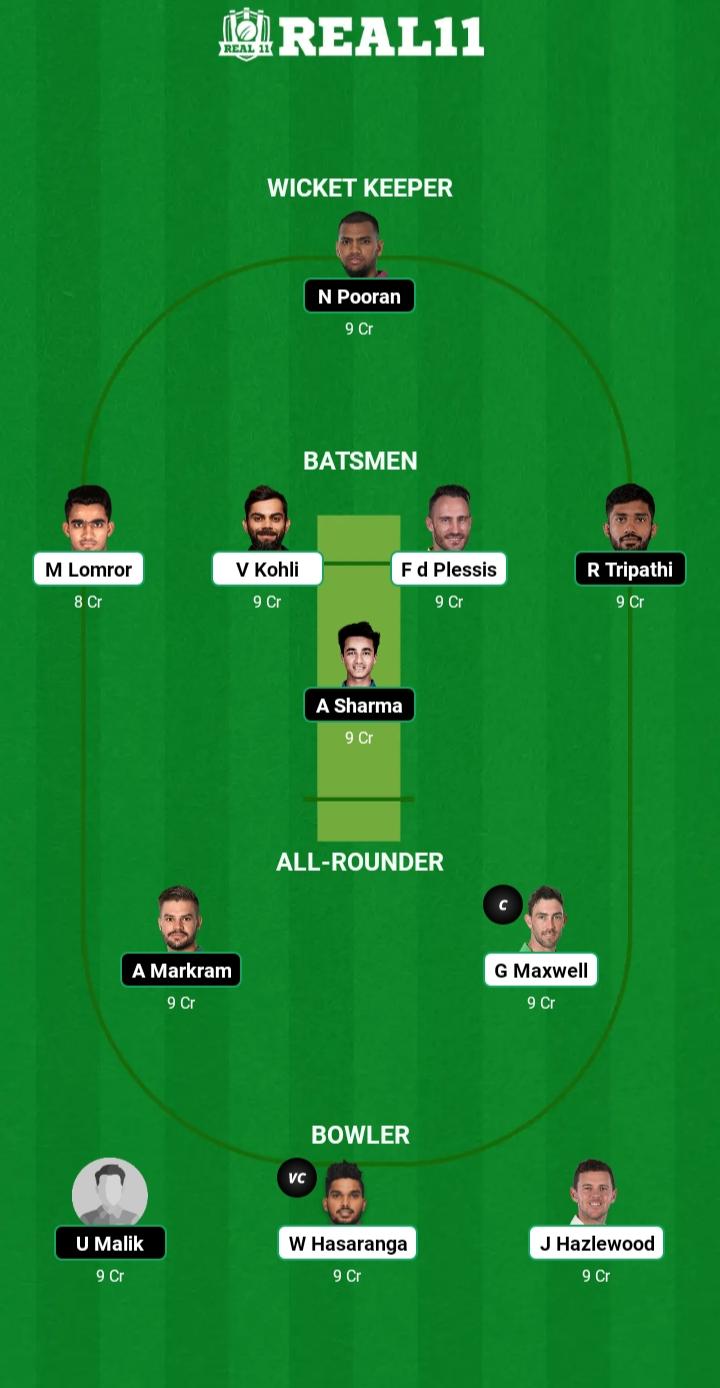