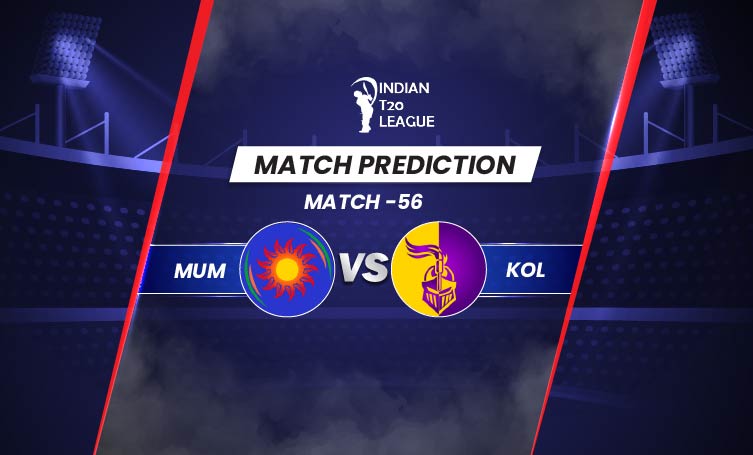 Mumbai and Kolkata will lock horns in match 56 of the Indian T20 League at the  Dr. DY Patil Sports Academy, Navi Mumbai on Monday. With 4 wins in 10 games, Shreyas Iyer and co are in a typical position fighting for a comeback in the Top-4 of the points table. They defeated Rajasthan in their previous clash. Mumbai on the other hand eventually ended their 8-match losing streak with a comfortable win over Rajasthan and Gujarat. The purple army with 8 points is precariously placed at eighth.

Both the teams have struggled in this season of the Indian T20 League with their players being out of form. Kolkata struggled with their openers and Mumbai basically is out of touch in both variations. Kolkata although gave Baba Indrajith a chance to open, he played his debut match after spending five years in the dugout. But this too didn’t work and Kolkata is still on its way to finding a perfect pair of openers. Although the bowlers are in pretty good touch as Umesh Yadav is taking some quick wickets in the powerplays, Sunil Narine the mystery spinner is surprisingly economical. And Boult is keeping the pace strong, resulting in rattling wickets of the opponents.

On the other hand, Mumbai’s star-studded openers Ishan Kishan and Rohit Sharma played an outstanding knocks of 45 and 43 respectively adding good runs and aiding Mumbai to the winning tally. Bumrah being the star bowler of the Mumbai franchise hasn't performed quite well this season and still battling to find his form. Pollard being the hard-hitting finisher is also not in good touch. Impressively Suryakumar Yadav is carrying a lot on his back and still hoping for a comeback for his franchise. This match is a do-or-die match for both of them as those two points will be precious for them to stay alive in the tournament.

There is a lot of grass and moisture on the DY Patil Stadium ground. The pitch is expected to offer more bounce and act swiftly. The marginal turn produced by the surface is expected to help bowlers, particularly the spinners. Because the deck is fairly balanced, therefore a score of 150-160 on the pitch will be a fair outcome.

Mumbai came back to life after their last game with the League toppers Gujarat Titans. On the other hand, Kolkata has ended their five-match losing streak by defeating Rajasthan in their last game. Both the teams are quenched in thirst for winning matches, as they are in a do-or-die situation. While Mumbai will look to carry the momentum, Kolkata is still struggling to explore a stable opening pair in the Indian T20 League. It will be an enthralling clash and Kolkata will give a tough fight to serve Mumbai their second defeat against them in the Indian T20 League 2022.

Suryakumar is in sublime touch this season. He has now scored 303 runs with a batting average of  145.67 in the last 10 matches.

Daniel Sams has been the most economical bowler in Mumbai's last game against Gujarat. He handed Mumbai their second win of the season by defending 9 runs in the last over.

Umesh Yadav has by far been Kolkata’s best bowler this season. The Indian speedster has picked 15 wickets at a decent economy rate of 7.15.

Rinku Singh is showcasing his batting skills irrespective of the opponent. In the last 3 matches, he has scored 100 runs with an average of 149.25.

Rohit Sharma is in terrible form at the moment. But looking at his last match performance, the dashing opener was witnessing a comeback. But this is not the first time we are seeing the ‘Hitman’ scoring runs. He has survived the tough phase many times. Once the Mumbai skipper gets his eyes set, he is very hard to contain. Although you can take a gamble by assigning him as the captain of your Real11 fantasy team.