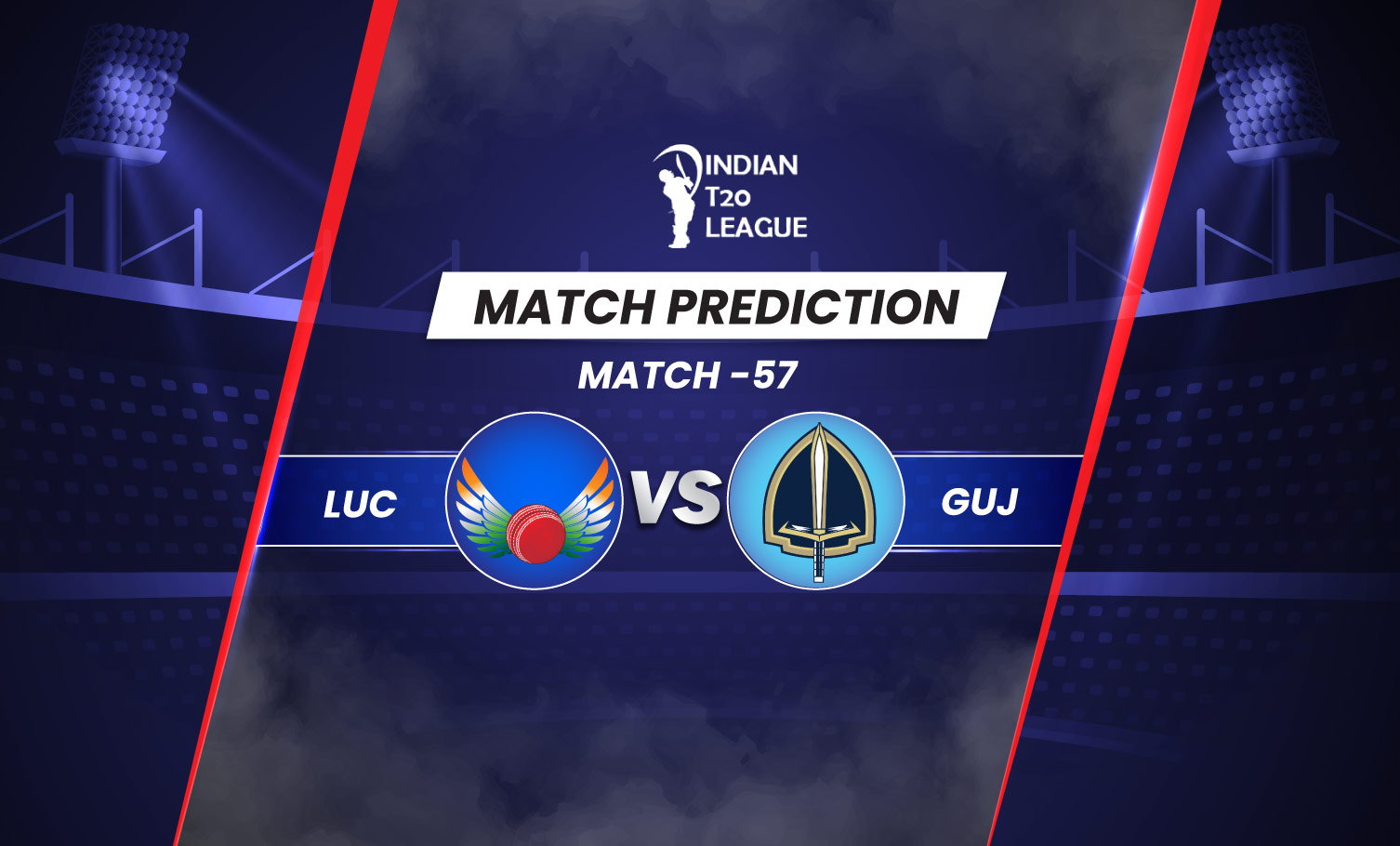 We have the biggest fixture lined up for us in the Indian T20 League as the top two boys of the competition are all set to fight against each other. Both the teams have won eight of their eleven games but because of a better run-rate, Lucknow is at the top of the chart at the moment. Despite a brilliant start in the league, Gujarat lost their last two matches against Mumbai and Punjab while Lucknow is currently on a winning streak of 5 matches. KL Rahul would want to extend this run but his brother from another mother would look to double up against Rahul and most importantly to get into the winning zone once again!

Lucknow is playing some quality cricket and defeated Kolkata by 75 runs in their last match. Either Quinton De Kock or Rahul is stepping up and leading the team from the front. Deepak Hooda, Krunal Pandya, Marcus Stoinis and everyone else is doing their bit and are helping the team. Same goes for their bowling attack. Avesh Khan had a very good game against Kolkata while Jason Holder, Dushmantha Chameera, Mohsin Khan are doing a great job with the ball. The team is well balanced and is one of the favourites to win the tournament this season. Young Badoni’s form might be a tiny bit of a problem but the way Lucknow is handling this situation is commendable. The team didn’t drop him and gave him quality time in the middle and this kind of backing is necessary for the player to grow and play well.

Gujarat needs to come back strong and change the game as we are in the business end of the tournament. Hardik Pandya’s form defined Gujarat when they were winning but things have changed when the captain is out of form. Wriddhiman Saha is playing some good cricket lately but Shubman Gill has been inconsistent. The youngster scored a fifty in the last match and the team will hope that he remains consistent and changes the game for the team. The middle order needs to play some good cricket else it will be tough for Gujarat going forward. If they bat first, players like Rahul Tewatia and Rashid Khan may be a bit ineffective and the team needs to think about that. Their bowlers are perfect but they are not clicking at the moment. They need to get back in touch as well.

Bowling first will obviously be the right decision when any of the captains wins the toss. Dew will not affect the game but batting will be much easier in the second innings. Pacers will get some help from the pitch.

It’s a tough call but Lucknow might be just a bit ahead of their opponent. Gujarat is a very good team and will fight hard until the end but when it comes to the balance of the team, Lucknow will be ahead of them.

Wriddhiman Saha is a must pick. After a controversy, he has improved his game massively and is playing some good cricket lately. If Lucknow bowlers fail to get him out early on, the Kolkata-born opener can score some quick runs and put Lucknow under pressure.

KL Rahul has been Lucknow’s standout batter this season. With 451 runs under his belt, Rahul is the second highest run-scorer of the tournament. The captain has stood for his team and delivered so far and the team will require the same from him as we are heading towards the business end of the tournament.

Rashid Khan has by far been Gujarat’s one of the best bowlers this season. The Afghani Spin Wizard may not have taken a lot of wickets like he is known for but still playing some quality cricket with bat and ball.

Avesh Khan is a proven game changer in this format. He is Lucknow’s best bowler so far in the tournament and he is leading the bowling attack of Lucknow. The team can definitely depend on him to get the result.

David Miller has not been in a good form lately. The South African is badly struggling with his innings in some matches and thus, has been inconsistent. He however got the talent and the temperament to do well and get better. He has done it in the past and you can take a bet on him of doing it again. 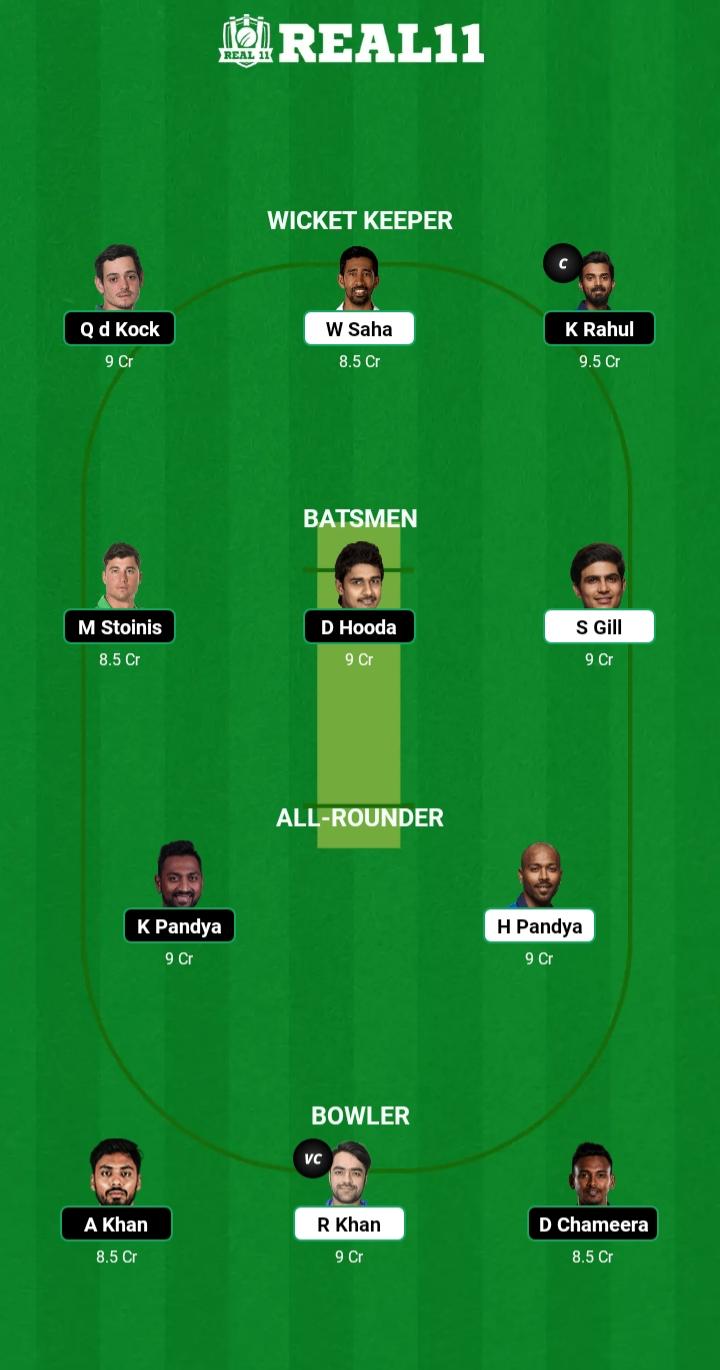 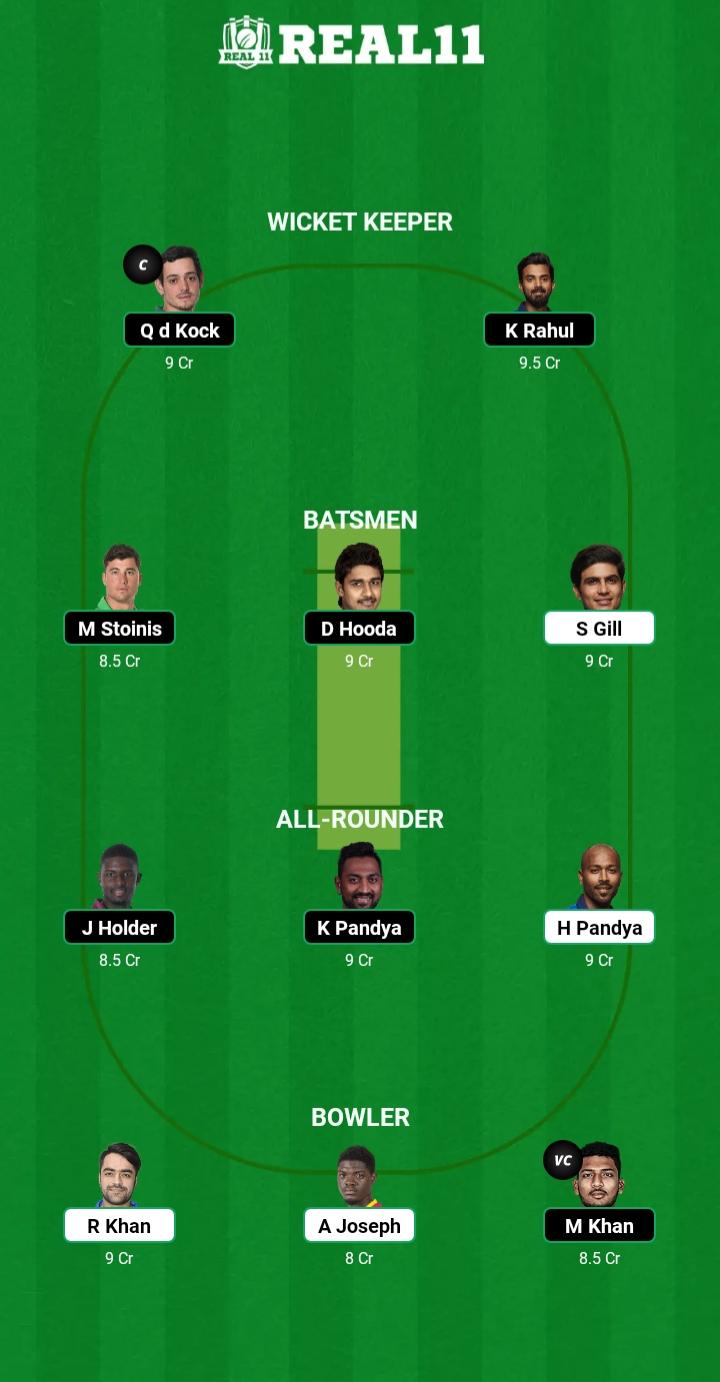