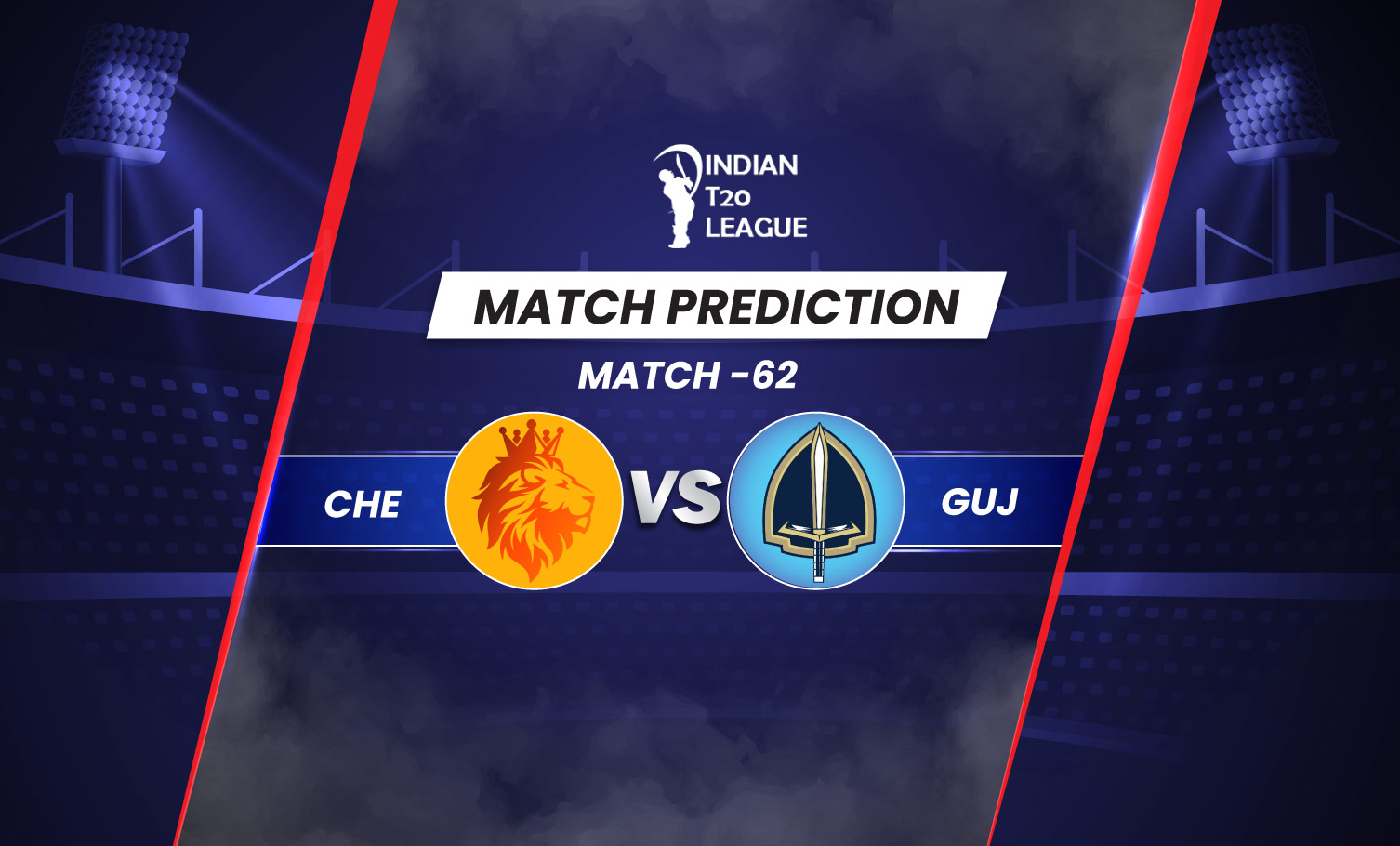 After suffering a crushing loss against Mumbai in their last game, Chennai will look to close out the remaining two league fixtures on a high. They will face a spirited Gujarat side in match number 62 at the iconic Wankhede Stadium on Sunday. Having already qualified for playoffs, Gujarat might try out a few new faces. With 18 points to their name, Gujarat has firmly established its position at the top of the points table and thus far is the only team to go through the next round.

Rare. Chennai not reaching playoffs is extremely rare. The men in yellow had an abysmal season and thus are positioned at seventh in the league standings. As a batting unit, defending champions have done well in patches. The opening pair of Ruturaj Gaikwad and Devon Conway in particular has been impressive. Shivam Dube is another player who is enjoying a purple passage with bat in hand. Ambati Rayudu and Robin Uthappa have made valuable contributions on a couple of occasions but that is about it. Skipper Ms Dhoni turned back the clock and proved his mettle as a finisher a couple of times. Major problem with the defending champions batting this year was their inability to maintain consistency. Bowling   which never has been their strong suit has done considerably been effective in this edition. The pace duo of Mukesh Chaudhary and Simranjeet Singh have been the chief architects of the progress within the bowling department. In the absence of Deepak Chahar, Chaudhary has been their strike bowler. He has enjoyed good support from Simranjeet at the other end and the two have created problems for the opposition batters. Chennai also possess a potent spin bowling attack with Mahesh Teekshana and Moeen Ali in the mix.

Gujarat have by far been the strongest team in this competition. From batting to bowling, the franchise has excelled in every department of the game. They are a formidable unit who have ticked all boxes required to win this tournament. In the batting division Gujarat have a solid opening pair in the form of Wridhimman Saha and Shubhman Gill. The duo have been successful at the top of the order and have played a critical role in the superb batting display put on by their side. Skipper Hardik Pandya, David Miller and Rahul Tewatia have all chipped in at different stages of the match. Mohommad Shami has led the bowling responsibility for Gujarat with 15 wickets. Lockie Ferguson, Rashid Khan and Yash Dawal will be the other bowlers to watch out for. This Gujarat side is showing no signs of slowing down and will be eager to pounce on a relatively fragile Chennai unit.

This pitch has traditionally been favourable for batting but as we witnessed in the last few games, the surface has something for pace bowlers. They will get the movement during the initial passage of play. Batters need to be cautious during the early stages and let loose  once they have got their eyes set in.

Gujarat will start firm favourites to win this one. They are high on confidence and will have all the momentum coming into this fixture. Chennai on the contrary will be diffident. They however cannot be taken lightly. They have  players who are very able to single handedly change the fate of the game. Expect Dhoni and co to put up a tough fight.

Devon Conway was unlucky in the last game against Mumbai. The southpaw thus far has not put a foot wrong in the tournament and we fancy him to continue his good form.

Mukesh Chaudhary has been Dhoni’s main man with  ball in hand. The left-armer has been lethal with the new ball and has constantly picked up wickets upfront.

Wriddhiman Saha has been a revelation for Gujarat at the top of the order. The wicket keeper batsman has enjoyed a good tournament with the bat and we expect him to continue his good show.

Rashid Khan is a must pick. He is a certified match winner who not only is a proficient spin bowler but also an explosive batsman down the order.

Mukesh Chaudhary is our pick for this segment. The 25 year old has certainly made an impact with his quality swing bowling. He has a knack of picking early wickets during the powerplay and he is highly likely to do the same in this game. 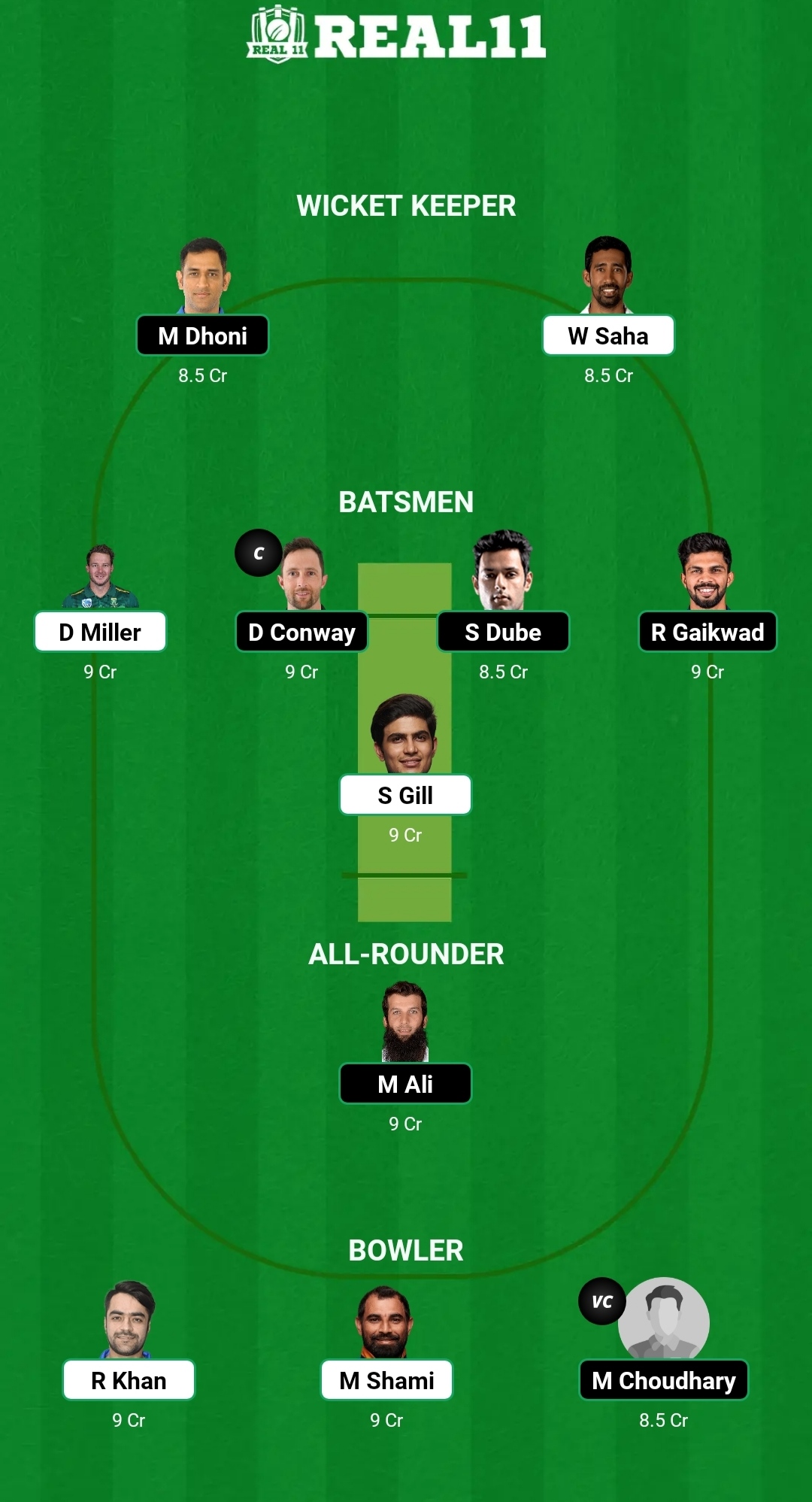 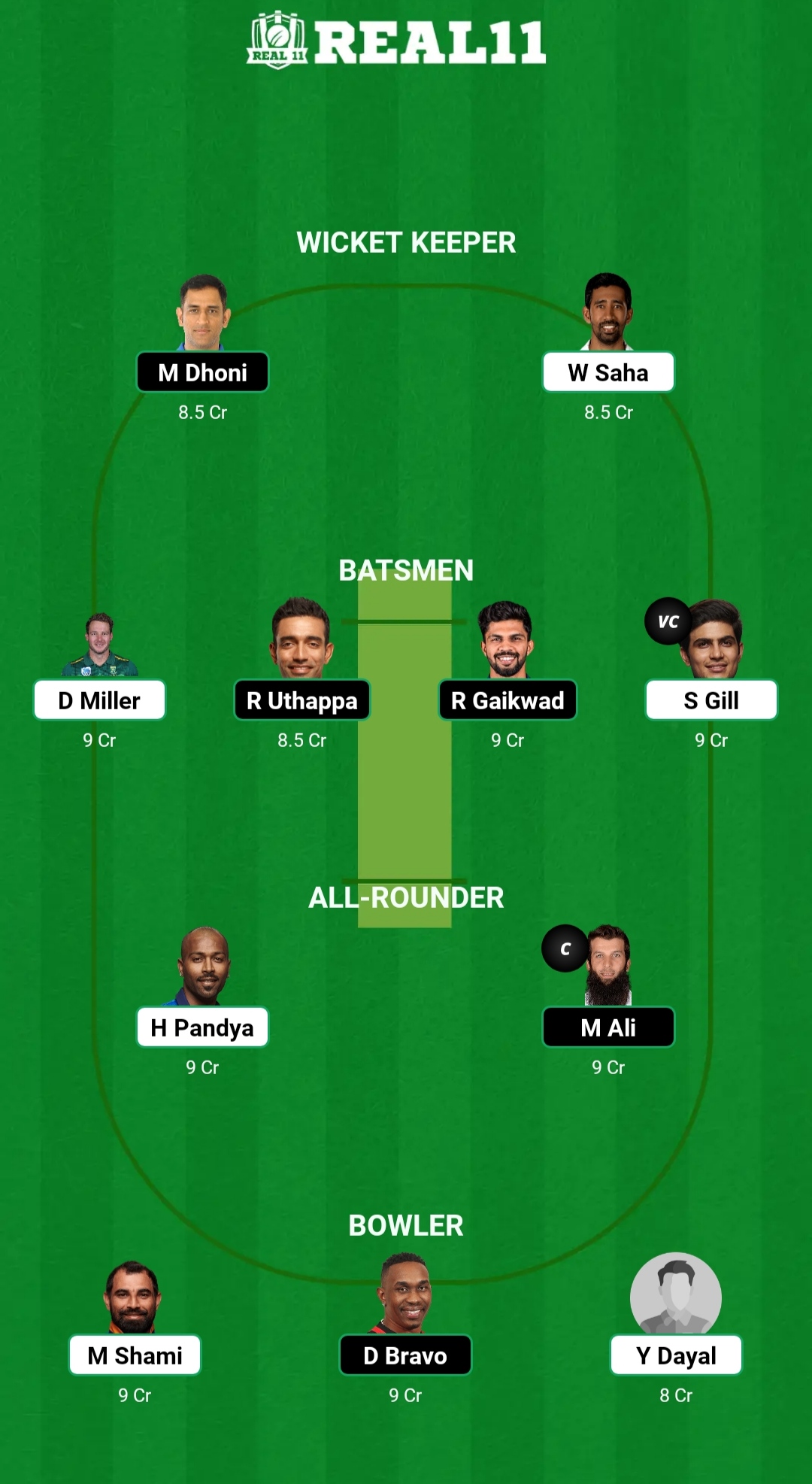