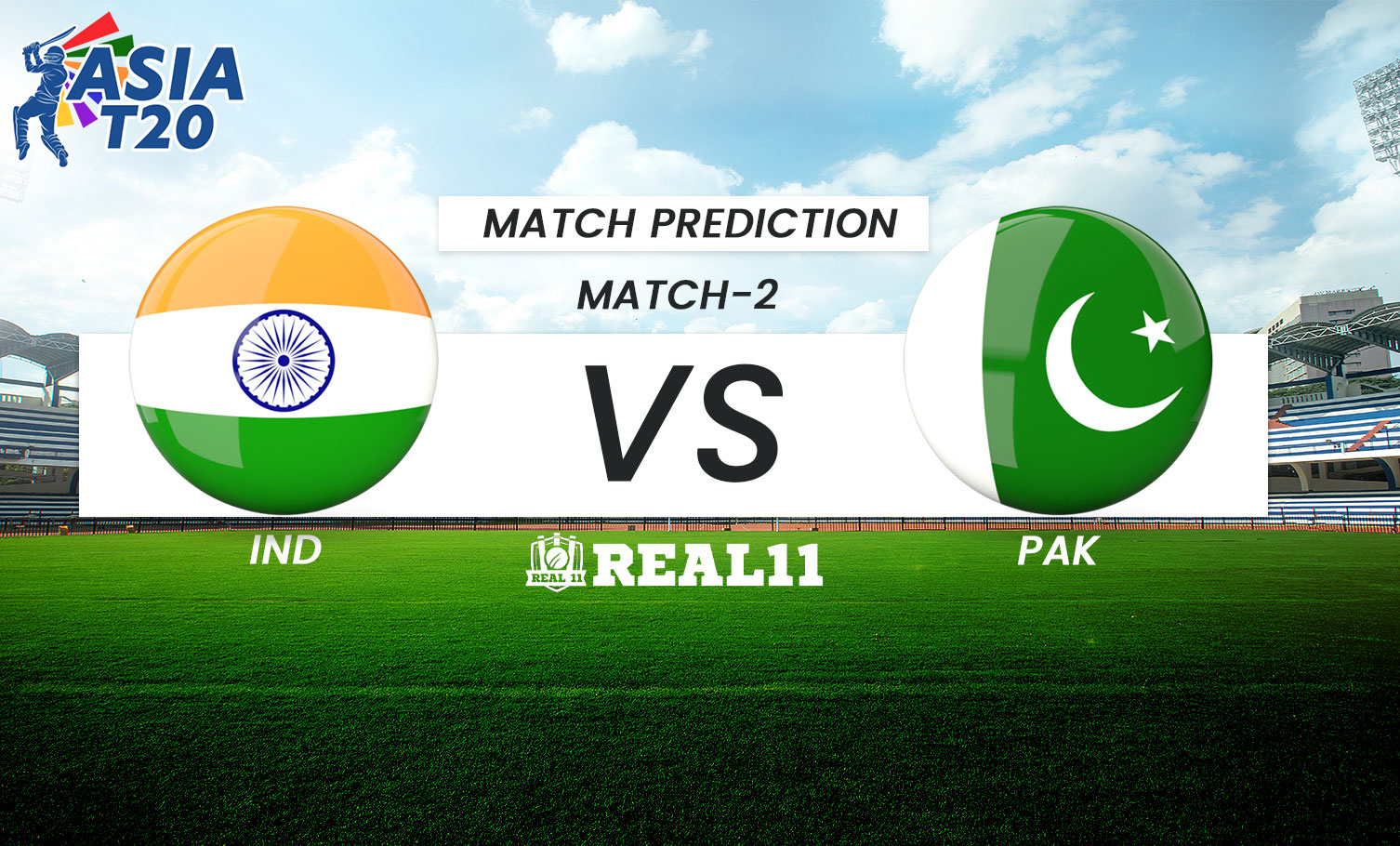 On Sunday, India and Pakistan will square off in Group A of the Asia T20 (August 28). Following the T20 World Series match in 2021, the two teams will play one another. India was defeated by Babar Azam's team by 10 wickets. This time around in the Asia T20, the team lead by Rohit Sharma wants to make amends.

This year in T20Is, the Men in Blue are performing well. They have defeated England, Ireland, Sri Lanka, and the West Indies. Additionally, newbies like Avesh Khan, Ishan Kishan, and Deepak Hooda have received numerous opportunities from India. Senior players Hardik Pandya, Rishabh Pant, and Bhuvneshwar Kumar are among those who are currently performing well. It's just a matter of being consistent and throwing the killer blow right now.

Shaheen Shah Afridi, Pakistan's talismanic pacer, will not be available. Due to a knee injury, he cannot compete in the Asia T20. He has, however, gone with the group and inspires them to perform well. Naseem Shah and Harris Rauf provide strong support for the Babar Azam-led team. Azam, the captain, and wicketkeeper Mohammad Rizwan are leading Pakistan's batting effort. Asif Ali will play a crucial role in a relatively inexperienced middle order.

The game will take place in Dubai. Generally speaking, the ground moves more slowly out here. 76 T20Is have been played here, with an average first innings score of 143

Babar Azam: As the top-ranked T20I batsman in the world, Babar is unstoppable in white-ball cricket at the moment. In last year’s T20 World Series, the 27-year-old and Mohammad Rizwan were the main architects of Pakistan's maiden victory over India. Babar has a 45.52 average in 20-over matches, and once he gets going, not even the finest bowlers in the world can get rid of him from the middle. It goes without saying that Babar will once again be crucial to Pakistan's success in this important game.

Rohit Sharma: Sharma off late has struggled with bat in hand. Although, he hasn’t played much T20Is this year.  Blessed with timing, the dashing opener is known for his prowess as a premium striker of the ball and even though he isn’t in the finest of touches lately, we still believe the Indian skipper to do well against the Shaheens.

Hardik Pandya: Over the last year or so, Hardik Pandya has shown us why he is regarded so highly in the world of cricket. Since his return to the side, the 28 year old all rounder has powered India to many thrilling finishes with his stellar show with both bat and ball.

Shadab Khan: Shadab Khan is a proven match winner for Pakistan. He shows immense control with ball in hand and possesses a knack of picking wickets. Apart from his craft as a leg spinner, Khan also has the ability to score quick runs down the order.

Bhuvneshwar Kumar: With 20 scalps in 16 innings, Kumar has been India’s highest wicket taker in T20Is this year. He will lead the bowling prowess in the absence of Jasprit Bumrah.

Haris Rauf: The Pakistani pace sensation has been in dream form with ball in hand. He will play a crucial role with the new ball.

Mohammad Rizwan: Rizwan has been in scintillating form for Pakistan this year in T20Is, scoring 1349 runs in 27 innings with a century and 12 half centuries, striking at 134.63, while averaging 71.00.

Fakhar Zaman is our pick for the risky captaincy choice. He is a hard hitting top order batter who can make mockery of the opposition bowlers when on song.

Every time these two teams face off, the entire cricketing world pauses to watch. We anticipate that this game will be highly entertaining, and it won't be any different. Due to Shaheen Shah Afridi's injury, we predict India’s win. 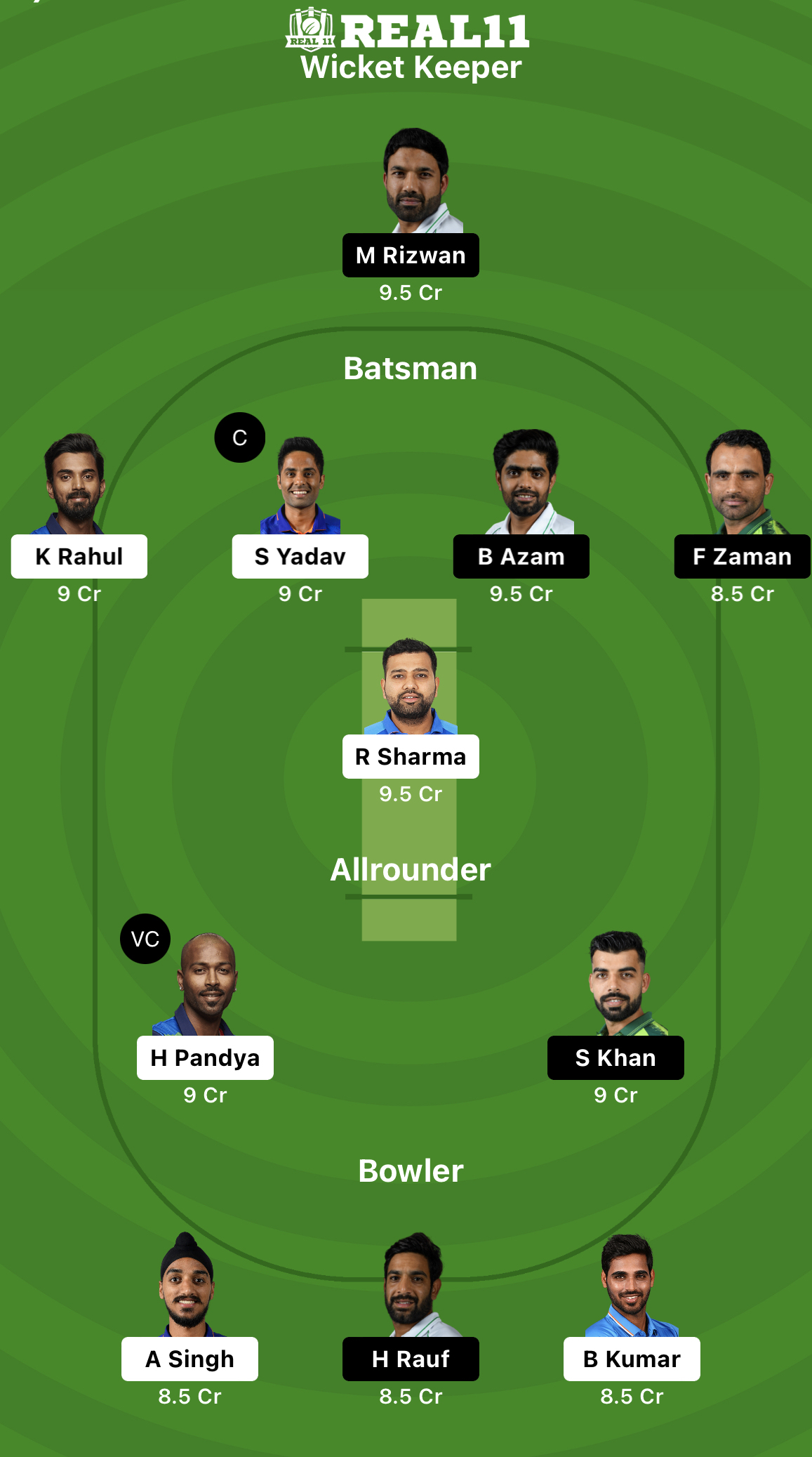